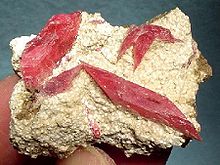 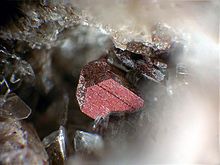 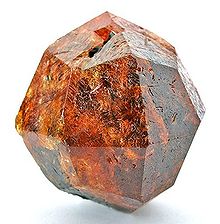 The most common crystal systems of metals.

Seven crystal systems can be distinguished, each of which can be related to the same axis cross that intersects the crystal body in the center: triclinic , monoclinic , orthorhombic , tetragonal , trigonal , hexagonal and cubic . The decisive factor for assigning a crystalline substance to one of the systems is the symmetry of the substance, which in turn gives rise to certain requirements for the length of the axes and the angles at which they intersect. The idea of ​​crystal systems goes back to Christian Samuel Weiss (1780–1856).

In contrast to this, amorphous material has no ordered structures and thus no crystal system, which means that its atoms or molecules form an irregular pattern.

Assignment of the crystallographic point groups to the crystal systems

When describing crystals and crystal structures, it makes sense not to use a Cartesian coordinate system , but rather a coordinate system that is adapted to the crystal system. In this way, for example, all rotation matrices of the symmetry operations become integral matrices. These coordinate systems meet certain conditions:

The given conditions are necessary, but not sufficient: It is possible that the axes of a triclinic crystal are of equal length and each include 90 °. It does not follow from this that the crystal is cubic.

It should be noted that this symmetry-related co-ordinate listing may no longer give a primitive basis. It is therefore necessary to indicate the centering in addition to the crystal system, whereby the 14 Bravais lattices are obtained.

The classification given above corresponds to that from the International Tables for Crystallography . There are others in the literature: In the American and the Russian, the trigonal and the hexagonal crystal system are combined into one. In French literature, and partly also in German, there is an eighth crystal system with the rhombohedral. The trigonal space groups with rhombohedral centering are assigned to this. The classification of the International Tables for Crystallography is the most consistent and is therefore becoming more and more popular.

Crystal systems were initially defined as axis systems. At the end of the 18th century, Haüy published his theory of the structure of crystals from the smallest building units ("molécules constituantes"). CS Weiss translated Haüy's textbooks. In the first edition of his translation, he added a supplement entitled Dynamic Views on Crystallization . His view that the outer shape of a system of internal forces of the crystals should be understood as the expression, led to the idea of the system of forces about an analysis of the arrangement particularly conspicuous directions of the crystals, the axes to make described mathematically. He defined an axis as follows:

"But an axis is actually a straight line that dominates the whole figure, around which everything is evenly distributed."

This “even distribution” around the axis already suggests the idea of rotational symmetry , which was only later formulated in concrete terms by Frankenheim and Hessel .

Weiss introduced the axis systems into crystallography. First, he differentiated four large “departments” of the crystal forms according to the arrangement of the axes, which he later expanded to include three sub-departments so that he could assign the crystal forms to a total of six “crystallization systems”. The concept of crystal systems was born. With the help of the axes, Weiss was able to characterize the position of all crystal faces for the first time using numbers (indices) in the form [ma: nb: pc]. The numbers m, n, p - the "Weiss coefficients" - are the intercepts at which the respective surface intersects the axes. He received the following systems (the modern names of the corresponding crystal systems are given in brackets):

Weiss claimed that the right-angled crystal systems proposed by him could describe the position of any surface and any direction. He also tried to describe obliquely angled (monoclinic and triclinic) crystals in a right-angled system. Despite the difficulties that resulted from the increasing accuracy of the measurement of crystal surfaces, Weiss stuck to the "orthogonality dogma" of the crystal axes throughout his life.

Friedrich Mohs developed a concept of crystal systems around the same time, but independently of Weiss. According to his own statement, Mohs had developed a division into four systems ( rhombohedral, pyramidal, prismatic and tessular ) as early as 1812–1814. The concept allowed skewed axes in principle, but Mohs only made a hint in this direction. It was only Mohs' pupil Carl Friedrich Naumann as well as Frankenheim and Justus Günther Graßmann who established the oblique axis systems.

Initially, the nomenclature was anything but uniform. In 1848, Traugott Leberecht Hasse gave a historical overview of the crystal systems in an orthogonal description:

The hexagonal crystal family has long been treated as a system. William Hallowes Miller distinguished six systems, which he defined as follows:

Miller also used the rhombohedral system to describe hexagonal crystals (which is easily possible). Up to this point, the crystal systems were used exclusively to describe crystal forms, i.e. the position of crystal faces in space. It was only with the establishment of the concept of translation grids by Frankenheim and later Auguste Bravais that it made sense to distinguish between a hexagonal and a rhombohedral grid.

In 1866 Bravais distinguished between seven classes of symmetry connections ("assemblages symétriques") - no longer on the basis of the axial relationships, but according to the maximum number of combinable axes of rotation. This classification corresponds exactly to the seven modern crystal systems (given in brackets):

In the following derivation, he distinguished between seven axis systems, including the rhombohedral and the hexagonal, but then explained:

It was not until the later 20th century that the concepts were more strictly delimited from one another, so that today there is a distinction between crystal system, crystal family and lattice system , which ultimately only differ in the subdivision of the trigonal / hexagonal systems.