The geometric term symmetry ( ancient Greek συμμετρία symmetria evenness, uniformity , from σύν syn "together" and μέτρον metron , measure) denotes the property that a geometric object can be mapped onto itself through movements , i.e. appears unchanged. A transformation that maps an object to itself is called a symmetry mapping or symmetry operation .

Sometimes two (or more) different geometrical objects are said to be symmetrical to one another if, viewed together, they form a symmetrical figure.

Depending on the number of dimensions considered, there are the following different symmetries:

Symmetries in the one-dimensional

In the one-dimensional, i.e. on a straight line, there is the symmetry with respect to a single point as well as the symmetry of the translation (displacement).

In two-dimensional a distinction must be made between point and axis symmetry . In addition, translation symmetries also occur here. 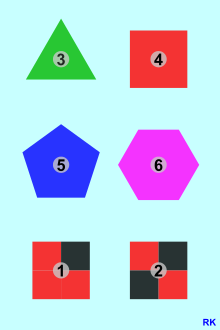 Mirror symmetrical objects in the plane

All symmetry elements of the above polygons, including their mirror symmetry lines

The mirror symmetry is a form of symmetry, which occurs when objects perpendicular to an axis of symmetry mirrored (see drawing). In two-dimensional terms, it is synonymous with axial symmetry or axis symmetry . The following applies to every axis mirroring:

A particularly popular task in school mathematics is to prove the axis symmetry for the graph of a function . This verification is particularly simple in the case of the symmetry of the y- axis of the (Cartesian) coordinate system . A function is axially symmetric to the y- axis if:

If it is valid for all x, then there is axial symmetry, that is, f is an even function .

This condition boils down to the fact that the function values ​​for the oppositely equal arguments and must match.

More generally, the following applies: The graph of a function f is axially symmetric to the straight line with the equation if and only if the following condition is true for any values ​​of x :

By substituting with one obtains the equivalent condition: 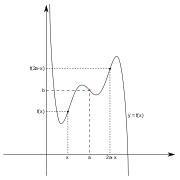 One of the most common tasks in school mathematics is to prove that the graph of a given function is point-symmetric. This proof can be provided with the following formula:

If it is valid for all x , then there is point symmetry in relation to the coordinate origin.

Figures that are transformed into themselves by a shift or translation (which is not the identity) have a translation symmetry . They are also known as periodic .

In some mathematical and physical contexts, the immutability of an object under enlargement or reduction is referred to as scale symmetry or scale invariance . This phenomenon becomes very clear in the so-called fractals .

Symmetry of echinoderms (pentamerism) using the example of the starfish : five-fold axis of rotation and vertical mirror planes ( point group C 5v according to Schoenflies )

The physique of the vast majority of animal species and the structure of many plant organs is externally almost mirror-symmetrical - referred to in biology as bilaterally symmetrical - with a left and a right half. The only plane of symmetry (monosymmetry) is the anatomical median plane , ie the median (centrally located) sagittal plane; that is every level through the body that extends front to back and top to bottom. 95 percent of all animal species, including humans, are bilateria ("two-sided animals") with the eponymous body symmetry (the other, very original animals (e.g. jellyfish ) often have rotational symmetry with respect to a longitudinal axis, their body is therefore an approximate one Solid of revolution ). Due to the monosymmetry of the bilateria, clear planes and directions of the body can be defined, which simplifies an anatomical description. But the symmetry of the body is not perfect, so many simply occurring (unpaired) internal organs (e.g. heart) are excluded from the mirror symmetry. All symmetrically designed body parts, for example in humans eyes , ears , arms , legs , breasts , etc., each have slight deviations from one another in terms of position, shape and size.

In zoology, the five-pointed radial symmetry of echinoderms , which is unique within Bilateria, is called pentamerism (i.e. in the case of the starfish , five planes of symmetry run through the central axis of rotation). In mathematics, the symmetry properties of the starfish can be described by a rotating group . (The starfish larvae are bilaterally symmetrical, like most of the other animals in the group. The pentamerism only develops during metamorphosis .)

Without a symmetry, ie asymmetrical , the tissue-less ( sponges and placozoa ).

Regular prisms with axes of rotation and their counts ( n = 1 means: without rotational symmetry)

Three-dimensional objects are rotationally symmetrical in the narrower sense, if a rotation around any angle around an axis (the axis of symmetry) maps the object onto itself. This type of rotational symmetry about an axis is also known as cylindrical symmetry . Three-dimensional geometric objects with this property are also called bodies of revolution.

Analogous to the two-dimensional, the concept of rotational or rotational symmetry is also used when the body can be mapped onto itself by rotating through certain angles around an axis. As examples of rotationally symmetrical 3D objects, prisms are shown in perspective in the graphic opposite , which arise when the 2D polygons of the graphic above Four regular polygons and two other geometric figures with the key figures of their rotational symmetry are displaced along a straight line perpendicular to the figure become. This procedure is also called an extrusion of the polygon. Straight prisms are created, special polyhedra , which in this case, if the given polygons are regular polygons, are called regular prisms.

The center of symmetry of a 2D object becomes the axis of rotation with an arrowhead through the extrusion, which can be used to determine whether the angle of rotation is to be counted as positive or negative (see corkscrew rule ). The symmetries shown belong to the cyclic groups to and are subgroups of the respective full symmetry groups of the prisms. It should be noted that these 3D objects have additional rotational and mirror symmetries. Representing the six regular prisms shown, all rotational symmetries of a homogeneous cube are considered in the following section .

Rotational symmetries of a cube

All 13 axes of rotational symmetry of a homogeneous cube

If one counts the symmetry elements of the rotational symmetry of the cube, they are: The neutral element , 3 each for 4-fold, 2 each for 3-fold and one each for 2-fold rotation axes. Overall, these are elements of symmetry.

These 24 elements together form the cube turning group . Cube and regular octahedron are dual Platonic solids and have the same symmetries. Therefore, the cube-turning group and the octahedron-turning group are dealt with together in the article Octahedron group . If you combine the rotating cube group with the point reflection at the center of the cube, elements of the full symmetry group of the cube result ( see below ). 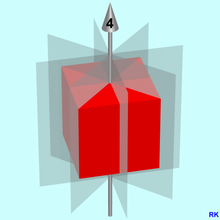 Highly symmetrical objects (like some of the prisms in the adjacent graphic) can have a large number of mirror planes that all intersect at one point. A sphere has an infinite number of mirror planes. The graphic below on the right shows four of nine mirror planes and one of the 13 axes of rotation of a homogeneous cube. The mirror planes intersect in the 4-fold axis of rotation. The symmetry shown is of the dihedral group type and is a subgroup of the cube group . The 48 symmetry elements of the cube group as a whole divide the cube into 48 (equivalent) fundamental areas .

Rotating mirror symmetries of a cube

One of three 4-way axes 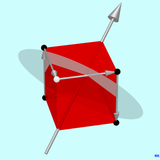 One of four 6-digit axes

One of six 2-fold axes (inversion)

Probably unexpected is the effect of the two-fold rotation mirroring to which the third graphic is dedicated. One of the 2-fold rotating mirror axes is shown, of which we expect six, based on the analogy of the rotating axes. If we carry out the 2-fold rotating mirroring according to the procedure outlined above, we find that each point of the cube is mapped to its " antipode ", that is, to the point on the opposite side of the cube. Point and image point lie together with the center of symmetry on a straight line and have the same distance from the center of symmetry. In this case, four white points are marked in the graphic and their pixels are marked as four black. All four connection vectors between point and image point intersect at the center of symmetry.

Differences between rotation mirroring and rotation

As mentioned at the beginning, the point mirroring in two-dimensional terms is equivalent to a rotation by 180 ° around the fixed point and therefore no separate symmetry element. 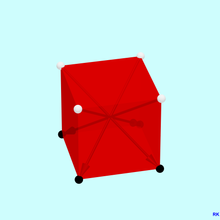 The homogeneous Platonic solids cube , octahedron , dodecahedron and icosahedron are point-symmetric. The simplest Platonic solid, however, the regular tetrahedron , is not.

In the case of the cube (including the inversion) 15 rotating mirror symmetries had resulted. Together with the 9 mirror levels, this results in 24 symmetry elements, i.e. exactly as many as there are elements of the cube rotating group. This is no coincidence, because every mirror or rotating mirror element can be interpreted as a combination of a rotation and an inversion. In this sense, the inversion of an inversely symmetrical body has a similarly prominent position as the neutral element within a symmetry group.

The symmetric basic operations can be derived from the possibility of combining symmetry operations: