This article deals with the mathematician Schoenflies, for his family see families Schoenflies and Hirschfeld and for other meanings see Schönfließ . 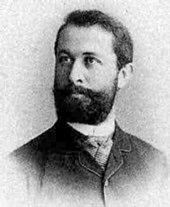 Arthur Moritz Schoenflies (born April 17, 1853 in Landsberg an der Warthe , today Gorzów, Poland , † May 27, 1928 in Frankfurt am Main ) was a mathematician and was best known for his contribution to crystallography .

Arthur Schoenflies came from a German-Jewish family. His father was a cigar manufacturer in Landsberg. Arthur Schoenflies married Emma Levin (1868–1939) in 1896, whose sister, the writer Julie, was married to the publisher Julius Levin . Emma and Arthur had five children, of whom his son Albert, district judge in Königsberg, was murdered like his wife in the Holocaust in Auschwitz in 1944 . Three daughters survived the Nazi era: Hanna married the financial scientist Ernst Kaemmel , Elisabeth the director of the Bunsengymnasium in Heidelberg Erich Kaufmann-Bühler. Her son Walter Kaufmann-Bühler headed the mathematics department at Julius Springer Verlag and was Gauß's biographer. Arthur Schoenflies' daughter Eva committed suicide in 1944 and is buried with her parents in Frankfurt. His relatives include Walter Benjamin , Gertrud Kolmar and Gustav Hirschfeld (→ families Schoenflies and Hirschfeld ).

Schoenflies studied with Ernst Kummer and Karl Weierstrass at the University of Berlin from 1870 to 1875. In 1877 he was with a dissertation on synthetic-geometric studies of surfaces of second degree and one derived from them ruled surface doctorate . He then taught as a math teacher in Berlin . In 1884 he completed his habilitation. In 1891 he was appointed to the newly created chair for applied mathematics in Göttingen . In 1899 he moved to the University of Königsberg as a professor and in 1911 became professor at the Academy for Social and Commercial Sciences in Frankfurt. Schoenflies ended his career in 1922 as rector of the University of Frankfurt , of which he was a co-founder. He was a member of the Leopoldina in Halle, the Bavarian Academy of Sciences in Munich, honorary member of the German Association of Scientists and one of the founding fathers of the German Association of Mathematicians .

In 1891, on the basis of a reference by Felix Klein and at the same time with Yevgraf Stepanowitsch Fjodorow , Schoenflies proved that, in group theory , there are no more and no less than 230 space groups with symmetries of the crystal structures. With this he had created an indispensable basis for the description of the diversity of crystal structures, cf. Schoenflies symbolism .

Other important findings concerned the analysis and set theory of Georg Cantor , which coined the concept of accessibility and Schoenflies' theorem . Schoenflies' considerations on set theory and elementary topology played a role in the discussions of his time, but were overtaken by the work of Luitzen Brouwer and Felix Hausdorff . In addition to Walther Nernst, Schoenflies contributed significantly to a standard work of the time, the textbook introducing natural scientists and engineers to the mathematical treatment of natural sciences ( Introduction to the mathematical treatment of natural sciences. 1895).

In 1922 he was President of the German Mathematicians Association .

On his gravestone there is an image of an elongated rhombic dodecahedron , which plays a role in the theory of crystallographic space groups.

Chair and President of the German Mathematicians Association