This article deals with the mathematician Hermann Weyl. 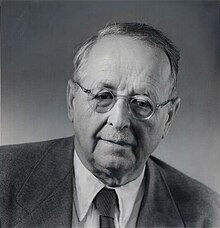 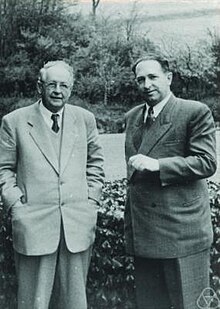 Hermann Klaus Hugo Weyl (born November 9, 1885 in Elmshorn ; † December 8, 1955 in Zurich ) was a German mathematician , physicist and philosopher , who was one of the last mathematical universalists because of his wide range of interests from number theory to theoretical physics and philosophy applies.

Weyl attended the Christianeum high school in Altona . On the recommendation of the director, who was a cousin of David Hilbert and who was impressed by the boy's talent, Weyl began to study mathematics with Hilbert in Göttingen in 1904 after graduating from high school, along with physics. He also took courses in philosophy with Edmund Husserl , where he met his future wife Helene . Except for one year (1905) in Munich , he studied in Göttingen, where he received his doctorate under David Hilbert in 1908 with the thesis "Singular integral equations with special consideration of Fourier's integral theorem", completed his habilitation in 1910 and taught until 1913 as a private lecturer.

In 1913 he married Helene Joseph from Ribnitz, who later translated many works by the Spanish philosopher José Ortega y Gasset . With her he had two sons. In the same year he received a professorship for the chair of geometry at the Swiss Federal Institute of Technology in Zurich , where he met Albert Einstein , who at that time (1916-1918) was developing his general theory of relativity , which Weyl for intensive occupation with the mathematical foundations of General relativity theory and its possible extensions (e.g. to take into account electrodynamics and a calibration parameter), but in particular with the underlying differential geometry .

In 1918 he published one of the first textbooks on general relativity (alongside textbooks by Max von Laue and Arthur Eddington ), Raum, Zeit, Materie .

He turned down a call to Göttingen to succeed Felix Klein . It was not until 1930, after Hilbert's chair had been orphaned, that he accepted that becoming Hilbert's successor was an honor for him that he could not refuse. However, the move from Zurich to Göttingen was not easy for him, as he viewed the political radicalization and the rise of National Socialism in the Weimar Republic with concern, as he expressed in an address to the Göttingen Mathematical Association in 1930: “ Only with some anxiety I find myself from its [traditionally democratic Switzerland] freer and more relaxed atmosphere back to the yawning, gloomy and tense Germany of the present. “Throughout his life he was committed to democratic ideals, and in 1933 he found himself unable to teach in Germany, which was ruled by the National Socialists, especially since his wife was Jewish. In his request for dismissal sent from Zurich on October 9, 1933 to the new National Socialist Education Minister Bernhard Rust , he wrote: “That I was out of place in Göttingen very soon dawned on me when, in the fall of 1930, after 17 years at the Federal Office Technischen Hochschule Zürich moved there as Hilbert's successor. ”Through the mediation of Albert Einstein, he accepted a position at the Institute for Advanced Study in Princeton , where he worked until 1951. His wife Helene died in Princeton in 1948, and in 1950 he married the sculptor Ellen Bär from Zurich, who made the Hermann Weyl bust that stands in his memory in the universities of Princeton, Zurich and Kiel. He spent most of the last years of his life in Zurich. In 1955 he received the honorary citizenship of his hometown Elmshorn, shortly afterwards he died unexpectedly in Zurich due to a heart attack that he suffered while sending mail to a mailbox.

Weyl has studied many areas of mathematics and has written several books and over 200 magazine articles.

He began as an analyst, in line with the interests of the Hilbert School at the beginning of the 20th century ( integral equations , spectral theory ), and completed his habilitation in 1910 on singular differential equations and their development in eigenfunctions, which are important in mathematical physics, among other things (later "spectral theory of self-adjoint operators") called). In 1915 (Rendicondi Circolo Mathematico di Palermo) he determined the asymptotic distribution of the eigenvalues ​​of the Laplace equation and showed that the first term is proportional to the volume, which the physicists (including Hendrik Antoon Lorentz ) when investigating cavity radiation , which the first connections between Quantum mechanics and classical theory delivered, had already suspected. Other parameters apart from the volume are irrelevant. The general question of whether one can infer the geometric shape of an area from the spectrum (the natural vibrations) was popularized by Mark Kac in his essay "Can one hear the shape of a drum?" (American Mathematical Monthly 1966).

What is less well known is that Weyl supported his Zurich colleague Erwin Schrödinger not insignificantly in his fundamental essay on quantum-theoretical wave mechanics by showing him the way to solve the Schrödinger equation for the hydrogen atom.

In 1913 he published the book The Idea of ​​the Riemann Surface , in which the previously heuristically introduced topological methods were treated more strictly and the modern concept of manifolds was systematically used for the first time.

Since his book on general relativity, Weyl has been keenly interested in connections to physics. He formulated the underlying differential geometry in a more general and flexible way, introducing an affine relationship . In Space, Time, Matter and in his essay Gravitation and Electricity from 1918, he first introduced the concept of a gauge theory , but initially not in its current form, but by means of a locally variable scale factor. The idea behind it was that when a vector is transported in parallel along a closed curve, not only is the direction changed (which is expressed by the curvature), but the length can also be changed. He hoped to incorporate electrodynamics into the theory. As the electrodynamics comprehensive extension of the theory, it was quickly rejected by Einstein as contradicting the experiments. The book Raum, Zeit, Materie systematically develops the Riccian tensor calculus and uses the parallel shift (introduced by Levi-Civita ) of vectors as a fundamental concept.

Weyl is the founder of gauge theories in today's sense, in a work from 1929, with gauge transformations as phase factors of the quantum mechanical wave functions.

The Weyl embedding problem of differential geometry is named after him.

Weyl took up the analysis of Riemann and Helmholtz 'ideas about the spatial forms that are possible under “reasonable” physical conditions in his Spanish lectures The Mathematical Analysis of the Spatial Problem in 1920. This led him to applications of group theory , from which his occupation with continuous groups developed ( Lie groups ).

His most important works ( Mathematische Zeitschrift , Vols 23/24, 1925/1926) are perhaps to be seen in the theory of Lie groups, the representation theory of which he investigates, introducing global concepts such as manifolds instead of the local aspects of Lie that had previously predominated -Algebra . For example, he explained the spinors for the first time from the topology of the rotating group . In addition, he suggests a connection to the methods of the representation theory of finite matrix groups developed by Frobenius and Schur . Weyl gives a general formula ("Weyl character formula") for the characters of the irreducible representations of semi-simple Lie groups by examining the Lie algebras with reflection groups, the Weyl groups , already investigated by Cartan and Wilhelm Killing . According to him, is Weyl integral formula named in the theory of Lie groups.

Another important result of his work is Peter-Weyl's sentence (Mathematische Annalen 1927), which he formulated together with his student Fritz Peter (1899–1949). If sine and cosine are orthogonal function systems with respect to the translation group in one dimension, there are those for general compact Lie groups G (for which an invariant (Haar) measure can be defined as an integral over the group elements). In this function space , a Hilbert space , the representations of group G are given by irreducible representations of the unitary group according to the Peter-Weyl theorem .

In group theory and quantum mechanics he gave in 1928 (somewhat before the books by Bartel Leendert van der Waerden and Eugene Wigner ) a presentation of the group theoretical aspects (and generally the mathematical aspects) of quantum mechanics, especially the representation theory of unitary and orthogonal groups (which in turn was based on Schur related to those of the symmetrical group ). In the book The Classical Groups of 1939 he expanded this to all classical groups and created the connection to the classical invariant theory, an important part of the algebra of the 19th century.

Weyl has been interested in number theory since studying with Hilbert (according to his own account, he spent the happiest months of his life studying Hilbert's number report during the semester break ). For example, he published an article in the Mathematische Annalen in 1916 on analytical number theory, equal distribution of numbers mod 1 . In it he showed that the decimal places of the multiple of an irrational number are not only dense in the interval [0.1], as Kronecker proved, but are evenly distributed. So they can be used well as random numbers .

Weyl's first reaction to the logical and set-theoretical antinomies that shook up the foundations of mathematics at the beginning of the 20th century was his book Das Kontinuum from 1918. Although he made contributions to axiomatic set theory in an essay from 1910, he was increasingly critical of the Opposed to set theory and its role as the basis of analysis, where he suspected deep-seated circular reasoning, and wanted to return to elementary concepts such as natural numbers and a few logical principles in the fundamentals like Henri Poincaré . A little later, in an essay that received a lot of attention (On the new basic crisis in mathematics, DMV annual report, 1921), he turned to the intuitionism of Luitzen Egbertus Jan Brouwer and thus against the program of his teacher David Hilbert towards an axiomatic foundation of mathematics based on set theory. Weyl had got to know intuitionism from personal discussions with Brouwer on vacation in Switzerland in 1919, after Brouwer had developed it in relative isolation during World War I. Weyl struck a militant tone in his essay, which made references to the political upheavals after the First World War. Hilbert was irritated by this; he saw intuitionism with its limitations for mathematical research as a step backwards (for example, intuitionism rejected proof of existence) and was reminded of the apodictically proclaimed reduction of mathematics to arithmetic and the rejection of set theory by Leopold Kronecker in his youth . While Brouwer received little attention at the time, Weyl's essay triggered the fundamental dispute in mathematics between intuitionists and formalists , especially since Weyl was a prominent representative of the Hilbert school. Weyl later deviated again from intuitionism, which he found too limiting. He approached his approach from 1918 again and vacillated between constructive mathematics and the axiomatics of the Hilbert school.

Weyl had been interested in philosophy since his youth, when he read Immanuel Kant's Critique of Pure Reason with space and time as a priori concepts of knowledge (even if he later disliked Kant's too close connection to Euclidean geometry). From 1912 he was strongly influenced by Edmund Husserl and his phenomenology, which was also reflected in some passages in his book Raum, Zeit, Materie. In 1927 his contribution to the Handbuch der Philosophie appeared in the Oldenbourg Verlag Philosophy of Mathematics and Natural Sciences , which was later published separately and revised as a book.

In the book Symmetry he gives a popular representation of the group concept, from snow crystals, ornaments (groups of plane translations and reflections / rotations) to the symmetry of equations with interchanging of the roots ( Galois theory ).

Chair and President of the German Mathematicians Association