The registered association is based in Tübingen and the office is in Berlin . President of the DMV is (as of 2019) Friedrich Götze .

The beginnings of the German Mathematicians Association go back to the 1860s: In 1867 the mathematician Alfred Clebsch pleaded for mathematicians to split off from the Society of German Natural Scientists and Doctors (GdNÄ). A first attempt to found a mathematicians' association in Göttingen in 1873, however, fizzled out, among other things because Clebsch, who was the driving force, had died a year earlier.

Georg Cantor made the second attempt to found the company , supported by Felix Klein , who worked in the background. A preliminary meeting took place in 1889 at the suggestion of Cantor at the GdNÄ in Heidelberg (15 mathematicians were involved, including Walther von Dyck , Aurel Voss , Alfred Pringsheim ) and Cantor sent a call for founding the German university mathematicians . However, there were reservations (among other things, many hesitated to part with the GdNÄ's attractive lecture program) and in the preliminary phase of the founding, some of the participants were close to giving up. But they achieved that the German Mathematicians Association was founded in Bremen in 1890, where the GdNÄ met that year, with Cantor as its first chairman; The first secretary was Felix Klein's student Walther von Dyck, whom Klein valued for his organizational talent. The 31 founding members include Cantor, Klein and van Dyck as well as David Hilbert , Hermann Minkowski , Carl Runge , Paul Gordan , Adolph Mayer , Emil Lampe , Carl Schilling , Rudolf Sturm , Hermann Schubert and Heinrich Weber . The preparation was marked by the opposition of Felix Klein's school and the Berlin mathematicians (led by Karl Weierstrass , Ernst Eduard Kummer and Leopold Kronecker ). Of the professors at the important Berlin university, only Reinhold Hoppe had come (Weierstrass was sick, Kronecker and others on vacation in the south), which allayed Klein's fears about the dominance of Berlin mathematicians. In spite of Klein and Cantor's efforts, only relatively few came from the professorships for mathematics at German universities: only 5 of 20 universities were represented by professorships, in contrast to almost all technical universities.

The first regular annual meeting of the DMV took place in 1891 together with the GDNÄ meeting in Halle. Preparatory statutes and rules of procedure were adopted here. In 1891 the DMV already had over 200 members (including the Berlin mathematicians Weierstrass, Kronecker, who was elected to the board in Halle in 1891, Ferdinand Georg Frobenius , Lazarus Fuchs ). GDNÄ and DMV met until 1931. Already in the first few years it was introduced that participants of the annual conference had to report on current research areas, which promoted the recognition of new developments. The association quickly gained international renown; in 1902 over a third (215) of all members (583) did not come from Germany. The only female member at the time was Charlotte Angas Scott .

With the rise of applied mathematics - promoted, among others, by Felix Klein , who at the end of the 1880s had called for a stronger link between engineering sciences and universities committed to the humanistic ideal of education - the desire arose in the Association of German Engineers and the DMV for their own representation of applied mathematics Mathematics. This led to the founding of the Society for Applied Mathematics and Mechanics (GAMM) in 1922 . As a result, the DMV concentrated even more on university mathematics.

In the time of National Socialism , the number of students generally fell. The decline was particularly pronounced in mathematics: the numbers fell from 4,245 in summer 1932 to 306 in summer 1939. Reasons were, among other things, the low birth rate, the introduction or expansion of labor and military service, and the establishment of non-university computing institutes. The dismissals from universities for racist or political reasons led to the fact that between 1933 and 1937 around 30 percent of the lecturers were absent. In terms of numbers, there was even an improvement in the supervision of the students, but the loss of most of the leading figures, including Richard von Mises , Emil Artin , Emmy Noether and Edmund Landau , considerably worsened the quality of research and teaching.

The DMV, unaffected by the political changes until 1933, was also affected by the layoffs. In the same year, the committee - the management body of the DMV, which had to elect the executive board and chairman - passed a resolution on the sidelines of the DMV meeting, according to which members of the committee of Aryan descent and also had to be prepared to work in the interests of the "national state" . The DMV board at that time consisted of Helmut Hasse , Otto Blumenthal and Ludwig Bieberbach .

In 1934 there were violent disputes within the DMV. The trigger was that Bieberbach repeatedly combined professional criticism of colleagues with racist arguments. Harald Bohr then attacked him in a public newspaper article. Bieberbach published an open letter against Bohr in the association publication "DMV-Mitteilungen" - without the consent of the co-editors Knopp and Hasse.

The general assembly in 1934 supported Bieberbach. Further disputes over the introduction of a “leader principle” in the DMV and the publication of amendments to the statutes led to the isolation of Bieberbach in 1935 and to a new composition of the board by Georg Hamel , Emanuel Sperner , Hasse and Knopp. As a result of the conflict, many respected members left the DMV, among them Bohr, Hermann Weyl , who had been chairman in 1932, and Richard Courant .

After the Second World War, Erich Kamke initiated a re-establishment of the DMV after he had failed with his demand that former party members should no longer hold offices in the DMV, which was directed in particular against the NSDAP member and long-term chairman Wilhelm Süss . The de jure re-establishment took place in September 1946 in the French-occupied zone; Süss took care of the establishment of the Mathematical Research Institute in Oberwolfach , which had already been established as the Reich Institute for Mathematics in 1944.

In 1961 the DMV members split off from the GDR: in 1962 the Mathematical Society of the German Democratic Republic was founded. In the same year, Friedrich Hirzebruch , then chairman of the DMV, began planning the first special research area in mathematics (SFB 40 "Theoretical Mathematics"), which was set up in Bonn in 1969 and from which the Max Planck Institute for Mathematics emerged in 1981 .

In 1990 the Mathematical Society of the GDR and the DMV were reunited.

From 1960 the DMV organized its annual conference together with other professional associations: every four years together with the ÖMG , at irregular intervals also with the GAMM and the Society for Didactics of Mathematics (GDM). A decisive event was the simultaneous staging of the International Congress of Mathematicians (ICM) in Berlin in 1998, which for the first time also garnered greater media coverage for the DMV.

In 2008, the DMV and other partners organized the Year of Mathematics under the then President Günter M. Ziegler .

The DMV annual conference takes place once a year - with main lectures on mathematical topics, mini-symposia and the Emmy Noether lecture. Twice a year, a current research topic from mathematics is taken up at the Gauss lecture at different university locations. Every two years the DMV awards the DMV Journalist Prize and the DMV Media Prize. Since 1990, the DMV has awarded the Georg Cantor Medal for important services to mathematics at most every two years in memory of its first President Georg Cantor .

In 2008 the association was co-organizer of the year of mathematics . Since then, at least one pupil can be awarded the DMV Abitur award for the best performance in mathematics at every school where there is an advanced mathematics course. Since 2009, the DMV has been organizing the “Math Month May”, in which projects are organized nationwide that make mathematics popular with schoolchildren and the general public. For school contacts, press and public relations work, the DMV maintains a school-university network office and a mathematics media office in Berlin. People who are also involved in mathematics outside of work can register with the DMV as mathematicians. The DMV honors exceptionally committed people as “Mathemaker of the Month”. Mathemakers are also MINT ambassadors for the “ Creating MINT Future ” initiative .

The Gauß lecture of the DMV , which has been organized annually since 2002, is aimed at a larger audience . 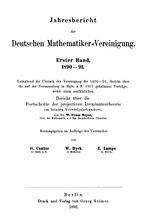 The organ of the association is called Messages of the German Mathematicians Association . This publication, which all members receive quarterly, contains articles on current mathematical topics, articles and interviews on studies and work, as well as book reviews of popular scientific publications. It also includes sections on new members, deaths, doctorates, post-doctoral degrees, appointments, appointments, honors and awards.

The communications have become known beyond specialist circles because they have been able to win Jamiri , one of the most famous German comic artists, as their house draftsman.

The association also publishes the annual report of the German Mathematicians Association as a scientific journal and, from 1996, the Documenta Mathematica .

In addition, the DMV operates the website www.mathematik.de, on which interesting facts about mathematics are collected. Information on mathematics and current research that is formulated in a generally understandable manner is just as important as information for students or reviews of various mathematical publications. This includes the short biographies , a freely accessible database on the Internet that provides biographical information on people who have obtained a doctorate in mathematics .

Honorary members have been appointed so far (as of 2019):

Since an amendment to the statutes in 1995, presidents instead of chairmen have been at the top of the DMV.

Wikinews: Category: DMV  - in the news