Archimedes , one of the most famous mathematicians of the ancient world 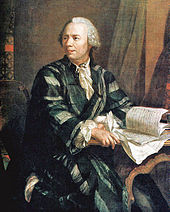 Leonhard Euler , one of the most productive mathematicians of modern times

You can work in specialist areas such as B. Numerical Mathematics , Statistics , Mathematical Logic , Algebra , Geometry , Analysis , Model Theory and Probability Theory . Since many processes and techniques can also be transferred to other sub-areas, a clear classification is not always possible.

More on this under study of mathematics .

The contents of the basic course usually include: Analysis , Linear Algebra , Numerics , Stochastics , an elective and a minor.

In the main course , areas of pure (theoretical) and applied mathematics are deepened, for example in the direction of differential geometry , topology , functional analysis or optimization . There is also a minor, which sometimes deals with the application of mathematics in other subjects, such as economics , computer science or physics .

On the basis of the passed diploma examination or Bachelor or Master examination, u. a. awarded the following degrees: