These definitions give no indication of how to determine the probabilities of individual events; they also say nothing about what chance and what probability actually are. The mathematical formulation of probability theory is thus open to various interpretations, but its results are nevertheless exact and independent of the respective understanding of the concept of probability.

So you can assign probabilities to the events in a meaningful way, they are listed in a quantitative system, the algebra of events or the event system on , a set of subsets of , for which: It contains and is a σ-body , d. That is, it is closed with respect to the set operations of union and complement formation (relative with respect to ) as well as with respect to the infinite union of countably many sets. The probabilities are then images of a certain mapping of the event space into the interval [0,1]. Such a mapping is called a probability measure . The triple is called the probability space.

The axiomatic foundation of probability theory was developed by Andrei Kolmogorow in the 1930s . A probability measure must therefore satisfy the following three axioms:

Example: As part of a physical model, a probability measure is used to describe the outcome of a coin toss, the possible outcomes ( called events ) may be numbers and heads .

Additional physical assumptions about the nature of the coin can now lead to a choice .

From the axioms there are some direct consequences:

2. It follows that the impossible event, the empty set , the probability zero has: .

3. For the union not necessary disjoint events follows: .

Proof: The quantities required for the proof are shown in the picture above. The set can then be represented as the union of three disjoint sets:

On the other hand, according to (3), both

The Poincaré-Sylvester sieve formula generalizes this assertion in the case of n different (not necessarily disjoint) subsets.

Furthermore, a distinction must be made between countable and uncountable result sets.

Example: A wheel of fortune with result set , event space (here the power set of ) and probability measure .

With a countable result set, each elementary event can be assigned a positive probability. If is finite or countably infinite, one can choose the power set of for σ-algebra . The sum of the probabilities of all natural events from is here 1.

Special properties in the case of discrete probability spaces

If one assumes that only a finite number of natural events are possible and that all are equal, i. H. occur with the same probability (such as when tossing an ideal coin, where {tails} and {heads} each have a probability of 0.5), one speaks of a Laplace experiment . Then probabilities can be calculated easily: We assume a finite result set that has the cardinality , i.e. i.e., it has elements. Then the probability of each natural event is simple .

Proof: If is, then there are natural events . It is then on the one hand and on the other hand two elementary events are disjoint (incompatible: if one occurs, the other cannot occur). So the conditions for axiom (3) are fulfilled, and we have:

Since on the other hand it is supposed to be, and therefore rearranged: as claimed.

In Laplace's experiments, the probability of an event is equal to the number of outcomes that are favorable to that event divided by the total number of possible outcomes.

The following is an example of rolling the dice with an ideal dice.

A typical attempt at Laplace is also drawing a card from a game of cards or drawing a ball from an urn with balls. Here every elementary event has the same probability. Combinatorial methods are often used to determine the number of elementary events in Laplace experiments .

The concept of the Laplace experiments can be generalized to the case of a constant uniform distribution .

A conditional probability is understood as the probability of an event occurring , provided that another event is already known. Of course , it must be able to happen, so it cannot be the impossible event. Then or less often one writes for “probability of under the assumption ”, in short “ of , provided ”.

Example: The probability of drawing a heart card from a Skat sheet (event ) is 1/4, because there are 32 cards and 8 of them are heart cards. Then is . The counter-event is then diamonds, spades or clubs and therefore has the probability . 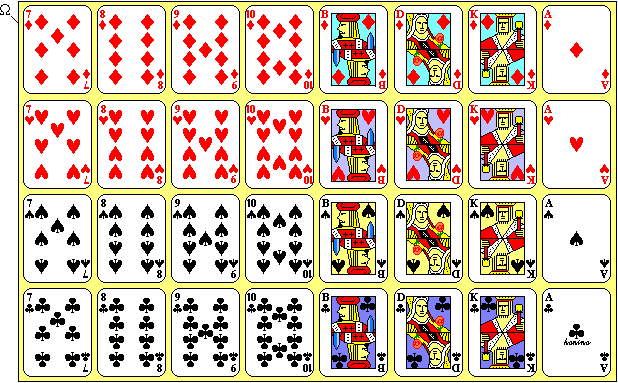 Result set when drawing a card from a Skat game

If, however, the event “The card is red” has already occurred (a heart or diamond card was drawn, but it is not known which of the two colors), you only have the choice between the 16 red cards , then the probability is that it is then the heart leaf.

This consideration applied to a Laplace experiment. For the general case , the conditional probability of “ provided ” is defined as

That this definition is meaningful is shown by the fact that the probability defined in this way satisfies Kolmogorov's axioms if one restricts oneself to a new result set; d. i.e. that the following applies:

This was to be shown.

Example: Let it be as above the event “Drawing a heart card” and the event “It is a red card”. Then:

The following consequences result from the definition of the conditional probability:

Proof: According to the definition of the conditional probability, on the one hand

and on the other hand too

Switching to then immediately delivers the assertion.

Example: A card is drawn from 32 cards. be the event: "It is a king". be the event: "It's a heart card". Then the simultaneous occurrence of and , thus the event: “The card drawn is a king of hearts”. Apparently it is . Furthermore , because there is only one heart card among the four kings. Indeed, then the probability is for the King of Hearts.

express if one knows the total probabilities and ( Bayes' theorem ).

Dependence and independence from events

Events are called independent of one another if the occurrence of one does not affect the probability of the other. In the opposite case, it is called dependent. One defines:

Two events and are independent if applies.

Inaccurately but memorably worded: In the case of independent events, the probabilities can be multiplied.

That this does justice to the term "independence" can be seen by changing over to :

Another example of very small and very large probabilities can be found in the Infinite Monkey Theorem .

Classical probability calculus only considers probabilities on discrete probability spaces and continuous models with density functions. These two approaches can be unified and generalized through the modern formulation of probability theory, which is based on the concepts and results of the theory of measure and integration .

Conversely, for a non-negative measurable function that fulfills the normalization condition, this formula defines a probability measure .

A random variable is the mathematical concept for a quantity whose value depends on chance. From maßtheoretischer point of view it is a measurable function on a probability space into a measuring space consisting of a set and a σ-algebra on . Measurability means that the archetype is an element of σ-algebra for everyone . The distribution of is then nothing other than the image size

which is induced by on the measurement space and makes it a probability space .

The expected value of a real-valued random variable averages the possible results. It can be defined abstractly as the integral of with respect to the probability measure :

Probability theory and mathematical statistics are collectively referred to as stochastics . Both areas are closely interrelated:

The theory of probability arose from the problem of the fair distribution of the stakes in abandoned games of chance . Other early uses also came from the area of ​​gambling.

Large areas of physics such as thermodynamics and quantum mechanics use probability theory for the theoretical description of their results.

It is also the basis for mathematical disciplines such as reliability theory, renewal theory and queuing theory and the tool for analysis in these areas.

Probability theory is also of central importance in pattern recognition .

Due to its diverse areas of application and the everyday relevance of even young students, probability theory is taught from grade 1 in all types of school as part of mathematics lessons. While elementary school is still about getting to know the basic concepts of probability calculus and evaluating the first random experiments with regard to their chances of winning, in lower secondary school the concept of probability is increasingly being examined analytically in its diversity and increasingly complex random experiments are the focus of interest. In the upper secondary level, the previous knowledge is expanded to include specific aspects such as Bernoulli chains, conditional probability and Laplace experiments.