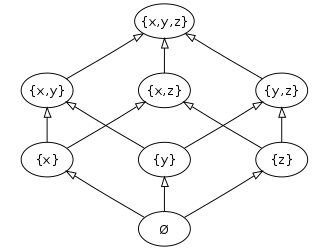 In set theory, the power set is the set of all subsets of a given basic set .

The power set of a set is usually noted as . The nature of the power set was already examined by Ernst Zermelo . The compact term “power set” on the other hand - which is useful in connection with the arithmetic power - was not used by Gerhard Hessenberg in his 1906 textbook either; he uses the phrase “set of subsets” for this.

The power set of a set is a new set that consists of all subsets of . The power set is therefore a system of sets , that is, a set whose elements are themselves sets. In formula notation, the definition of a power set is

It should be noted that the empty set and the set are also subsets of , i.e. elements of the power set . Other common notations for the power set are and .

Structures on the power set

The inclusion relation is a partial order on (and not a total order , if at least two elements). The smallest element of order is , the greatest element is .

The largest and the smallest element are obtained as the infimum or supremum of the empty set, i.e.

If you also use the complement map, it is a Boolean lattice , i.e. a distributive and complementary lattice.

Each subset can be assigned the characteristic function , where applies

This assignment is a bijection between and (using the notation for the set of all functions from to ). This also motivates the notation , because in von Neumann's model of natural numbers is (in general:) .

The correspondence is initially a pure bijection, but can easily be demonstrated as an isomorphism with respect to each of the structures considered above on the power set.

The size of the power set (cardinality)

denotes the power of a crowd .

The transition to the power set always provides greater power. Analogously to finite sets, one also writes for the cardinality of the power set of an infinite set . The generalized continuum hypothesis (GCH) says for infinite sets that the next greater thickness is:

With the set of those subsets of which contain fewer than elements. For example : The set itself is missing because it has no less than elements.

The concept of the power set can be extended to classes , whereby it should be noted that real classes cannot be on the left side of the membership relation . The power (power class) of a class K is given by the class of all sets whose elements are all contained in K. The elements of the power class of K are therefore the subsets of K. The power of a real class K is again a real class, because it contains the units {x} for all elements x of K. It always contains the empty set ∅, but not the real class K itself.