The mathematical terms subset and superset describe a relationship between two sets . Another word for subset is subset .

For the mathematical representation of the embedding of a subset to its basic amount mathematical function of the subset relationship that is inclusion mapping used. is a subset of and is a superset of if every element of is also contained in. If also contains further elements that are not contained in, then is a true subset of and is a true superset of . The set of all subsets of a given set is called the power set of .

Georg Cantor - the "inventor" of set theory - coined the term subset from 1884; the symbol of the subset relation was introduced by Ernst Schröder in 1890 in his " Algebra of Logic ".

If and are sets and every element of is also an element of , one calls a subset or subset of :

Conversely, the superset of is called if and only if is a subset of :

There is also the concept of the real subset. is a proper subset of if and only if a subset of and is not identical to .

Again you write when .

Some authors also use the characters and for subset and superset instead of and . Most of the time, the author does not define the term “real subset”.

Other authors prefer the characters and instead of and for proper subset and superset . This usage is fittingly reminiscent of the signs of inequality and . Since this notation is mostly used when the difference between real and non-real subset is important, the characters and are rarely used.

Variants of the character are also , and . If is not a subset of , can also be used. Corresponding spellings are for , and for , as well as (no superset).

Instead of “ is a subset of .”, “The amount is contained in the amount ” or “The amount is comprised of .” Is also used . In the same way, instead of “ is a superset of .”, “The set contains the set .” Or “The set includes the set .” Is also used. If there cannot be misunderstandings, “ contains ” etc. is also said. Misunderstandings can arise especially with "The quantity contains the element ." 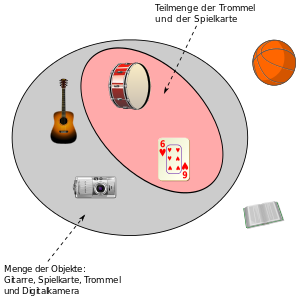 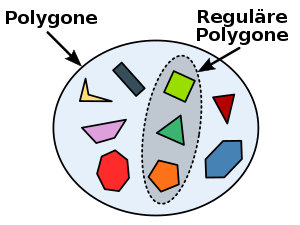 The regular polygons are a subset of the set of all polygons.

Inclusion as an order relation

Inclusion as a relation between sets fulfills the three properties of a partial order relation , namely it is reflexive , antisymmetric and transitive :

(This is an abbreviation for and .)

So if there is a set of sets (a set system ), then there is a partial order . This is especially true for the power set of a given set .

A special case of an inclusion chain is when a (finite or infinite) sequence of quantities is given, which is arranged in ascending or descending order. You then write briefly:

Size and number of subsets