The title of this article is ambiguous. Further meanings are listed under Algebra (disambiguation) . 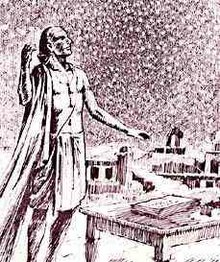 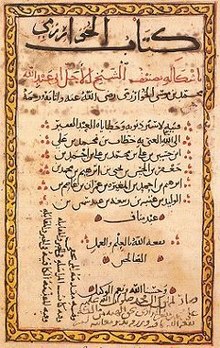 The algebra (from Arabic الجبر, DMG al-ğabr “the joining of broken parts”) is one of the fundamental sub-areas of mathematics ; it deals with the properties of arithmetic operations . Popularly, algebra is often referred to as calculating with unknowns in equations (for example ); the unknown is (or the unknowns are) represented with letters. The Greek Diophantos of Alexandria is considered to be the founder of algebra , who probably lived between 100 BC. BC and 350 AD lived. His 13-volume work Arithmetica is the oldest surviving to this day, in which the algebraic method (i.e. calculating with letters) is used.

The first description of the algebraic method can be found in the Arithmetica , a textbook and exercise book by Diophantos of Alexandria , the date of which dates back to the 1st century BC. According to other sources, it is dated to the 4th century AD. Another representation of algebra is the Aryabhattiya, a mathematical textbook by the Indian mathematician Aryabhata from the 5th century ; the methodology used was called Bijaganitam . From the 9th century onwards, scholars from the Arabic-speaking countries took over and refined this method, which they called al-ǧabr (from Arabic: "adding" / "setting up"). The term is taken from the title of the arithmetic textbook Al-Kitāb al-muḫtaṣar fī ḥisāb al-ğabr wa-ʾl-muqābala ("The concise book on the calculation methods by supplementing and balancing", originated around 825) by the Persian mathematician and polymath al- Chwarizmi , who worked in Baghdad in the 9th century . Four centuries after the book was published, its Latin translation, Ludus algebrae almucgrabalaeque, appeared . The current word “algebra” developed from “al-ǧabr”.

Time of the Babylonians

which are equivalent to a quadratic equation of shape to solve. Such equations can have irrational numbers as solutions. The Babylonians were not interested in exact solutions, but calculated approximate solutions, mostly with the help of linear interpolation. Nor did the Babylonians yet deal with negative numbers . One of the most famous clay tablets of the Babylonians is Plimpton 322 , which was made between 1900 and 1600 BC. Was created. It lists Pythagorean triples , which means that the Babylonians already knew the meaning of these numbers 1000 years before Pythagoras.

Time of the Egyptians

The Rhind papyrus , one of the most important sources for today's knowledge of mathematics in ancient Egypt , was first published around 1650 BC. Translated by Ahmes from an older work. In the papyrus, linear equations of the form and , where , , and are known and the unknown is achieved by geometrical methods.

Time of the Greeks

Like the Egyptians and Babylonians, the ancient Greeks also studied algebraic equations . However, they were not only interested in practical issues, but also saw geometric issues as a central part of their philosophy , especially in the early phases . This was the beginning of algebra and geometry and thus mathematics as a science . The terms of algebraic equations represented sides, mostly lines, of geometric objects for the Greeks. Using construction methods with compasses and rulers , they determined solutions to certain algebraic equations. Since the ancient Greek algebra was founded on geometry, it is called geometric algebra. Recently, however, this interpretation has been controversial. The concept of a geometric algebra of the Greeks comes from Hieronymus Zeuthen and for a long time the preferred theory was that the Greeks had their original knowledge of algebra from the Babylonians, but after the discovery of irrationality by the Pythagoreans, they dressed it in the form of geometric theorems ( Bartel Leendert van der Waerden and other). Criticism of this came in particular from philologists and philosophers ( Jacob Klein , Árpád Szabó , Sabetai Unguru with a well-known controversy in the 1970s, Wilbur Richard Knorr ).

The second volume of the elements written by Euclid contains a number of algebraic statements formulated in the language of geometry. Among other things, Euclid discussed the theory of surface application in the elements, which goes back to the ancient Pythagoreans . With this method one can solve certain linear and quadratic equations with an indeterminate from the point of view of modern algebra. In the tenth book of the elements, Euclid gave a proof of the irrationality of the root of 2 . Irrational proportions were also known to the Pythagoreans (apart from their concept of numbers), who had also proven Euclid's theorem in a more general form.

Diophantos of Alexandria , who probably lived around the year 250 AD, is considered to be the most important algebraic of antiquity. His first and most important work, the Arithmetica , originally consisted of thirteen individual books, of which only six have survived. With this work he completely replaced arithmetic and algebra, which is concerned with the consideration of positive, rational solutions to problems, from geometry. Diophantus' mathematics also differed from that of the Babylonians, because he was primarily interested in exact and non-approximate solutions.

In Europe in the early modern period, in addition to arithmetic books, a higher level of arithmetic was used, which was practiced by Cossists (symbolic manipulation of equations). The solution of linear and quadratic equations was extended to cubic and quartic equations in Italy in the Renaissance (16th century) ( Scipione dal Ferro , Niccolò Tartaglia , Lodovico Ferrari , Gerolamo Cardano ). The French François Viète is an important founder of algebra and its application to geometry with consistent use of variables and equations between them. The theory of equations was further expanded in the 18th century ( Leonhard Euler , Joseph-Louis Lagrange ) and, in particular, the solution in the complex was included. Above all, Carl Friedrich Gauß proved the Fundamental Theorem of Algebra (1799), which states that an algebraic equation -th degree has exact solutions. Algebra at that time was largely the study of algebraic equations of form

on properties of their solutions , which is why one speaks of classical algebra . Around 1830, Évariste Galois (1811–1832) developed the Galois theory . This can be understood as the beginning of modern algebra . Galois and independently Niels Henrik Abel solved the long open problem of solving algebraic equations of higher than fourth degree, whereby at that time solution was understood to be the representation through the usual arithmetic operations and root expressions (called "radicals") by showing that this was from fifth degree is generally no longer possible ( theorem of Abel-Ruffini ). In this context, the beginnings of group theory (permutation groups, the abstract group concept was later introduced by Arthur Cayley ) and body theory (finite bodies, also called Galois fields, body extensions) originate from Galois . The group theory of Galois was expanded in particular by Camille Jordan in the 19th century with contributions from Otto Hölder ( theorem of Jordan-Hölder ) and others. The theory of continuous groups ( Lie groups ) was established by Sophus Lie in the 19th century, with structural theorems and the theory of Lie algebras by Wilhelm Killing and Élie Cartan towards the end of the 19th century.

Further algebraic structures were added, whereby various algebras were partly geometrically motivated ( Hermann Grassmann with the vector concept and Grassmann algebra as the basis of the differential forms by Élie Cartan, quaternions by William Rowan Hamilton , Clifford algebra by William Kingdon Clifford , the first gained importance in applications much later with the spinor concept ) or came from logic ( Boolean algebra ), sometimes simply from the question of expanding complex numbers ( hypercomplex numbers , division algebras, which also include quaternions). Important classification theorems for algebras were the Wedderburn theorem and the Frobenius theorem .

The linear algebra originated from the theory of matrices and determinants ( Augustin-Louis Cauchy , Cayley, James Joseph Sylvester ). The expansion to multilinear algebra ( tensor concept ) began at the end of the 19th century in differential geometry ( Gregorio Ricci-Curbastro , Tullio Levi-Civita ) and physics.

The representation theory, especially of groups, also developed from the end of the 19th century ( Ferdinand Georg Frobenius , Issai Schur ). It is particularly important for the applications of group theory in the natural sciences, both in terms of finite groups and in terms of Lie groups (representation theory by Elie Cartan with the spinor concept, Hermann Weyl and others).

The ideal theory was founded in the 19th century by Richard Dedekind and Leopold Kronecker (with applications to algebraic number theory and function fields ). Other important principles of abstract algebra come from Dedekind (such as the conception of the Galois group as an automorphism group of bodies, concepts of ring and module ). The theory of polynomial ideals (commutative rings in the context of commutative algebra ) was founded in the school of David Hilbert , with important contributions from Emmy Noether , Emanuel Lasker , Francis Macaulay and later further developed by Wolfgang Krull . By Ernst Steinitz the algebraic theory of the body is designed to 1909th The school of Emmy Noether in Göttingen, from which the standard-setting textbook Modern Algebra by van der Waerden emerged, was of central importance for the development of modern algebra . From here, applications in other areas such as topology (algebraic topology) and commutative algebra became the basis of algebraic geometry. Other important representatives of algebra in Germany at that time were Emil Artin and Helmut Hasse .

A high point of group theory in the 20th century was the completion of the classification of finite groups and the development of the theory of infinite dimensional representations, for example of Lie groups ( Harish Chandra , application in quantum theory and in the Langlands program ).

Algebra as a branch of mathematics: definition and structure

The contents and methods of algebra have expanded so much in the course of history that it has become difficult to give the term algebra in a concise definition. In the following some sub-areas of algebra and some other sub-areas adjacent to algebra are mentioned. However, these are by no means sharply delimited from one another.