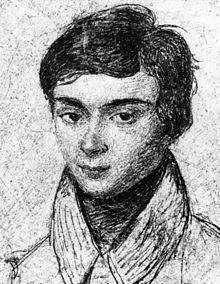 Évariste Galois (born October 25, 1811 in Bourg-la-Reine , † May 31, 1832 in Paris ) was a French mathematician . He died at the age of only 20 years ago in a duel , but gained through his work on the solution of algebraic equations , the so-called Galois theory , posthumous recognition.

Galois attended the College Louis-le-Grand in Paris, failed twice in the entrance examination to the École polytechnique and began studying at the École normal supérieure . At the age of 17 he published his first work on continued fractions ; a little later he submitted a thesis to the Académie des Sciences on equation resolution, which contained the core of the Galois theory that is named after him today . The Academy rejected the manuscript, but encouraged Galois to submit an improved and expanded version. This process was repeated twice with the participation of Augustin-Louis Cauchy , Joseph Fourier and Siméon Denis Poisson . Galois reacted bitterly, accusing the Academy of misappropriating manuscripts and choosing to have his work printed at his own expense.

As a Republican, Galois was disappointed with the outcome of the July Revolution and increasingly exposed himself politically; he was expelled from college and arrested twice. The first arrest for a toast made to the new King Louis-Philippe at a banquet with a bare knife in his hand , which was interpreted as a hidden death threat, was followed by an acquittal on June 15, 1831. Just one month later, Galois, in the uniform of the Artillery Guard, which had since been disbanded due to political unreliability and heavily armed, took part in a demonstration on July 14, was arrested again and, after three months of pre- trial detention, sentenced to six months in prison at Sainte-Pélagie . In March 1832, because of a cholera epidemic, he and other inmates were transferred to the Sieur Faultrier sanatorium. He was released on April 29th.

On the morning of May 30, 1832, Galois was shot through the stomach in a pistol duel near Sieur Faultrier, was left alone by his opponent and his own second, was found hours later by a farmer and brought to a hospital, where the next day he was “in the poor ”of his brother Alfred died. The opponent in the duel was a republican like-minded fellow, Perschin d'Herbinville, and not, as occasionally put forward ( Leopold Infeld in Who the Gods Love ), an agent provocateur of the government. The reason for the duel was a girl, Stéphanie-Félicie Poterin du Motel, the daughter of a doctor working at Sieur Faultrier. Galois exchanged letters with her after his release from the sanatorium, and her name is found on his last manuscript; but she seems to have distanced herself from him.

Nevertheless, there are persistent voices saying that the duel was staged because Galois had little interest in Stéphanie and his opponent was a well-known shooter, and it was even claimed that he sacrificed himself for the Republican cause in this duel. Other assessments speak of staged suicide because of his unhappy love. Such duels "for the sake of honor", on the other hand, were quite common back then.

The night before his duel, he wrote a letter to his friend Auguste Chevalier, in which he recommended the significance of his mathematical discoveries and asked him to present his manuscripts to Carl Friedrich Gauß and Carl Gustav Jacob Jacobi ; He also added marginal notes such as “je n'ai pas le temps” (I don't have the time) in his writings. Chevalier copied Galois' works and circulated them among the mathematicians of his time, including Gauss and Jacobi, of whom no reaction is known. The importance of the scriptures was not recognized until 1843 by Joseph Liouville , who saw the connection with Cauchy's theory of permutations and published it in his journal.

Galois founded the Galois theory named after him today , which deals with the resolution of algebraic equations, i.e. H. deals with the factorization of polynomials . The basic problem of algebra at that time comprised the general solution of algebraic equations with radicals (i.e. roots in the sense of powers with fractional exponents), as they had been known for a long time for equations of the second, third and fourth degree. Galois recognized the underlying constructions of group theory . Independently (and not known to Galois), Niels Henrik Abel had shown that a general polynomial equation of degree higher than 4 cannot in general be solved by radicals. Galois examined groups of exchanges of the zeros of the equation polynomial (also called roots ), in particular the so-called Galois group G , the definition of which by Galois was still rather complicated. In today's language this is the group of automorphisms of the extension field L over the base field, which is defined by the adjunction of all zeros. Galois realized that the subgroups of G and the subbodies of L correspond bijectively .

One then shows, for example, that in the case of the general equation of the 5th degree for the associated group - the symmetric group S 5 of the permutations of 5 objects - there is no composition series of a chain of normal divisors with cyclic factor groups that correspond to the automorphism groups of the by adjunct of roots correspond formed intermediate bodies. S 5 is not a resolvable group because it only contains the simple subgroup A 5 as a real normal divisor , the alternating group of the even permutations of 5 objects. This is generalized in the theorem that for n > 4 the symmetric group S n has the only real nontrivial normal sub-divisor A n that is non-cyclic and simple, i.e. H. without nontrivial normal divisors. From this follows the general insolubility of equations higher than 4th degree due to radicals.

Because of these concepts and sentences he found, Galois is one of the founders of group theory . In recognition of his fundamental work, the mathematical structures Galois field ( finite field ), Galois connection and Galois cohomology were named after him. Like other, particularly famous mathematicians, a symbol is dedicated to him: GF ( q ) stands for Galois Field (Galois field) with q elements and is as established in literature as the Gaussian bracket or the Kronecker symbol .

He thus also provided the basis for proofs of the general unsolvability of two of the three classic problems of ancient mathematics , the trisection of the angle and the doubling of the cube (each with a pair of compasses and ruler, i.e. with square roots and linear equations). However, these proofs can also be carried out more simply, i.e. without Galois theory. The third problem, the squaring of the circle , was shelved by Ferdinand Lindemann's proof of the transcendence of .

In the letter to Auguste Chevalier, Galois also suggests work on elliptical functions . 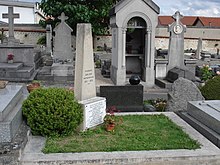