A polynomial sums the multiples of powers of a variable or indefinite :

or briefly with the sum symbol :

Here is the sum symbol, the numbers are the respective multiples and is the indeterminate.

Exponents of powers are natural numbers . The sum is also always finite . Infinite sums of multiples of powers with natural-number exponents of an indeterminate are called formal power series .

There are some important special polynomials for math and physics .

The word polynomial means something like "multi-named". It comes from the Greek πολύ polý "much" and όνομα onoma "name". This name goes back to Euclid's elements . In book X he calls a two-part sum ἐκ δύο ὀνομάτων (ek dýo onomátōn): "consisting of two names". The term polynomial goes back to Vieta : In his Isagoge (1591) he uses the expression polynomia magnitudo for a quantity with several terms . 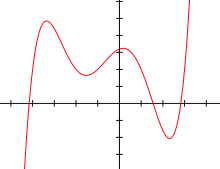 In elementary algebra , a polynomial function is a function of form

where any - algebra is possible as the domain of definition for the (independent) variable , if the range of values ​​is the coefficients (see below). However, this is often the set of whole , real or complex numbers .

The coefficient is called the absolute term. is called a linear term , a square term and a cubic term.

a third degree polynomial is given (the highest occurring exponent is 3). In this example, 9 is the leading coefficient (as a factor before the highest power of ), the other coefficients are: 1 ; 7 and −3.8 .

The zeros of a polynomial function or roots or solutions of a polynomial equation are those values ​​of for which the function value is zero, i.e. i.e., which satisfy the equation . A polynomial over a body (or more generally an integrity ring ) always has at most as many zeros as its degree indicates.

The position of all zeros of a polynomial of degree can be estimated by zero bounds, in the calculation of which only the coefficients and the degree of the polynomial are included.

The following are examples of real zero bounds for normalized polynomials ; every polynomial can be converted to this form by division. For some real zero bounds, the sub-index set of the genuinely negative coefficients of plays a special role, denoting their number.

fulfilled, is a real zero digit limit (such are even limits for the absolute values ​​of complex zeros of complex polynomials). Special cases of this are (see also Gerschgorin's theorem )

fulfilled, defines a circle in the complex plane with a radius around the origin, which contains exactly complex zeros (consequence from Rouché's theorem ). This inequality is solvable forever, but not necessary for every index .

d. H. applies to the -th coefficient ; in other words: the coefficients are symmetrical. For these polynomials and those that meet a slight modification of this symmetry condition, the determination of the zeros with the help of substitution (or ) can be reduced to a polynomial equation whose degree is half as large. See reciprocal polynomial for details .

If we assume real, then the solutions are multiples of the complex -th roots of unity :

The solution occurs through substitution . If a solution for has been found, it must be taken into account that two solutions for can be derived from this:

In abstract algebra , a polynomial is defined as an element of a polynomial ring . This in turn is the extension of the coefficient ring by an indefinite, (algebraically) free element . Thus contains the potencies , and their linear combinations with . These are all elements, i. that is, every polynomial is unique by the sequence

characterized by its coefficients.

with these links there is now itself a commutative ring, the polynomial ring (in an indeterminate) over .

If one identifies the indefinite as a sequence , so that , etc., then every sequence can again be represented in the intuitive sense as a polynomial as

Relation to the analytical definition

If one now considers that according to the assumption there exists a natural number , so that applies to all , then, according to the above considerations, every polynomial over a commutative unitary ring can be clearly written as . However, this is not a function as in analysis or elementary algebra, but an infinite sequence (an element of the ring ) and is not an “unknown”, but the sequence . However, one can use it as a “pattern” to then form a polynomial function (i.e. a polynomial in the ordinary analytical sense). For this one uses the so-called insertion homomorphism .

It should be noted, however, that different polynomials can induce the same polynomial function. For example, if the remainder class ring , the polynomials induce

both the zero mapping , that is: for everyone

For polynomials over the real or integers or in general any infinite integrity ring , however, a polynomial is determined by the induced polynomial function.

In general, one understands every sum of monomials of the form as a polynomial (in several indeterminates):

With a monomial order it is possible to arrange the monomials in such a polynomial and thereby generalize terms such as guide coefficient .

The maximum number of possible monomials of a given degree is

where is the number of occurring indeterminates and the degree. A problem of combinations with repetition (replacement) is clearly considered here.

The polynomials in the indeterminate above the ring also form a polynomial ring, written as .

Going to infinite rows of form

over, one obtains formal power series .

If you also allow negative exponents in a polynomial, you get a Laurent polynomial . Corresponding to the formal power series, formal Laurent series can also be considered. These are objects of form

If you allow several variables and any real powers, you get the concept of the posynomial function .