The elements (in the original Στοιχεῖα Stoicheia ) are a treatise by the Greek mathematician Euclid (3rd century BC), in which he summarizes and systematizes the arithmetic and geometry of his time. For the first time, the work exemplifies the structure of an exact science, since most statements are derived and proven from a limited store of definitions , postulates and axioms . To this day, this approach has not only influenced mathematicians, but also many physicists, philosophers and theologians in their attempt to base their science on axioms.

The elements were used as an academic textbook for 2000 years and were the most widely distributed work in world literature after the Bible until the second half of the 19th century .

Euclid's Elements originally consisted of 13 books with the following topics in the individual books (the presumed sources in brackets):

Book 1–6: Surface geometry, u. a. congruent and similar figures

Book 7–9: Arithmetik , u. a. Number theory and proportion theory

Two more were later added to these books, but they are not counted among the actual elements:

Euclid's elements contain many important mathematical results. In part, the elements are the oldest source for these results. The following are known, for example:

Title page of Henry Billingsley's English Translation of the Elements (1570)

The oldest surviving Greek manuscript comes from Byzantium of the year 888 and is today kept in the Bodleian Library ( Oxford ) (MS. D'Orville 301) and corresponds to the edition in the arrangement by Theon of Alexandria. Of particular importance is a Greek manuscript from the 10th century in the Vatican library (Vaticanus Graecus 190, named by Heiberg P ), which contains a text before the editing by Theon and on which all recent editions are based. It contains books 1 to 15 (as well as the data, Marinos' commentary on the data and some texts by Theon). There is also a papyrus fragment found in Oxyrhynchus in 1897 (Oxyrhynchus 29, University of Pennsylvania Library), probably from the period AD 75 to 125, but containing only Proposition 5 from Book 2, and a papyrus fragment from Herculaneum (No. . 1061) with definition 15 from Book 1.

Both the version by Theon and Vatican 190 contain explanations or minor additions by older editors, the so-called Scholia.

A translation of Boethius from Greek into Latin (around 500) is only partially preserved today and only in later versions. Earlier translations into Latin (before Boethius) are lost.

Of the numerous Arabic translations and commentaries, the two only fragmentarily known translations of al-Haggag (or al-Hajjaj) from the end of the 8th century and those of Ishaq ibn Hunayn  /  Thabit ibn Qurra (end of the 9th century) were particularly important for tradition. or by Nasir Al-din al-Tusi (1248) of importance. Al-Nayrizi wrote a commentary in the early 10th century based on the translation by Al-Haggag.

We owe the first medieval translation of the elements into Latin to the Englishman Adelard von Bath . He roamed Europe in the 12th century in search of manuscripts and around 1120 transferred this work from Arabic. Separately, the elements were translated from Arabic in the same century in Spain by at least two other famous translators: Hermann of Carinthia and Gerhard of Cremona . The most influential of the early translations was that of Campanus de Novara (c. 1260) into Latin (he used the translation by Adelhard von Bath and other works), which was also later the basis of the first prints of the elements and was the dominant until the 16th century The issue was when translations directly from Greek replaced them. All in all, the elements are one of the most common texts handed down in manuscripts from the Middle Ages in numerous different, mostly fairly free versions.

Also in the 12th century, another translation of the elements from Greek was made in southern Italy or Sicily , but the author is unknown. Because of the style of translation it seems likely that it is in this author by the same, which in 1160 also the Almagest of Ptolemy translated. She was identified by John E. Murdoch in 1966 . 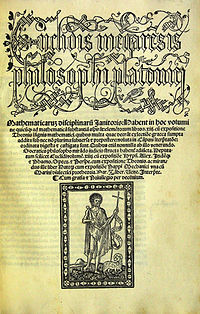 Title page of Bartolomeo Zamberti's Latin translation of the elements (1505)

Of course, The Elements were one of the first works to be printed. The first Latin edition, based on the translation by Campanus of Novara, appeared in Venice in 1482. The preparatory work on the Regiomontanus remained unfinished in the 1460s. A complete translation from the Greek by Bartolomeo Zamberti (or Zamberto, 1473 to after 1543) could then be printed in 1505. From this period after the invention of printing , only a few important works are highlighted here: the translation of Federicus Commandinus (1509–1575) from Greek (1572), the extensively commented edition by Christoph Clavius (1574) and the Oxford edition of Works of Euclid by David Gregory 1703 (Greek / Latin). All of these were translations into Latin. The first translation into a modern Western language was published by Niccolò Tartaglia in 1543. The first German translation appeared in 1555 ( Johann Scheubel ) and Simon Marius published the first German translation (of the first six books) directly from Greek in 1609. The first English translation appeared in 1570 ( Henry Billingsley ), the first French in 1564 ( Pierre Forcadel ), the first Spanish in 1576 ( Rodrigo Zamorano ) and the first in Dutch in 1606 ( Jan Pieterszoon Dou ). The first translation into Chinese (the first parts) was done by Xu Guangqi and Matteo Ricci (1607). In the popular editions from the 16th century onwards, however, simplifications and revisions were often made, the evidence replaced by examples, and in most cases not all books of the elements were published, but typically only the first six.

The first printed edition of the Greek text (Editio Princeps) was published by Simon Grynaeus in Basel in 1533.

Well-known commentaries were written by Proclus and Theon of Alexandria in antiquity , who also made his own arrangements in his edition of the elements. All editions known in the West were based on text versions that came from Theon and his school until the 19th century. Only Johan Ludvig Heiberg reconstructed an original version based on a manuscript (Vaticanus Graecus 190) that was not based on the tradition of Theon, and which François Peyrard discovered among the books confiscated by Napoleon from the Vatican. From this, Peyrard published a French translation in 1804 and 1814-1818, and it was used in Germany by Johann Wilhelm Camerer and Karl Friedrich Hauber for their Latin-Greek edition of the first six books in 1824/25. After the Heiberg edition, Clemens Thaer published a German translation (1933–1937).

In 1996, Wilbur Richard Knorr criticized Heiberg's text edition, which follows the Greek lineage and is considered the standard edition, based on the Arabic lineage (which Heiberg had dealt with in 1884 on the occasion of Martin Klamroth's research on the Arabic Euclid ).

Wikisource: The Elements of Euclid  - by Isaac Todhunter (English)