The title of this article is ambiguous. Further meanings are listed under Axiom (disambiguation) .

An axiom (from the Greek ἀξίωμα axíoma , "appreciation, judgment, principle accepted as true") is a principle of a theory , a science or an axiomatic system that is not justified or deductively derived within this system .

Within a theory that can be formalized, a thesis is a proposition that is to be proven. An axiom is a proposition that is not supposed to be proved in theory, but is presupposed without proof. If the chosen axioms of the theory are logically independent , none of them can be derived from the others. The axioms of this calculus can always be derived within the framework of a formal calculus . In the formal or syntactic sense, this is a proof ; From a semantic point of view, it is a circular argument . Otherwise the following applies: "If a derivation is based on the axioms of a calculus or on true statements, one speaks of a proof."

Axiom is used as the opposite of theorem (in the narrower sense). Theorems like axioms are theorems of a formalized calculus that are connected by derivative relationships. Theorems are theorems that are derived from axioms through formal proofs. Sometimes, however, the terms thesis and theorem are used in a broader sense for all valid propositions of a formal system; H. as a generic term that includes both axioms and theorems in the original sense.

Axioms can thus be understood as conditions of the complete theory insofar as they can be expressed in a formalized calculus. Within an interpreted formal language , different theories can be distinguished by the choice of axioms. In the case of uninterpreted calculi of formal logic , instead of theories, one speaks of logical systems that are completely determined by axioms and rules of inference . This relativizes the concept of deducibility or provability: It only ever exists in relation to a given system. The axioms and the derived statements belong to the object language , the rules to the metalanguage .

However, a calculus is not necessarily an axiomatic calculus, which therefore consists of “a set of axioms and the smallest possible set of inference rules”. There are also proof calculi and tableau calculi .

Immanuel Kant calls axioms “synthetic principles a priori, provided they are immediately certain” and by this definition excludes them from the field of philosophy. This is based on concepts which, as abstract images, never have any evidence as an object of immediate intuition. He therefore distinguishes the discursive principles of philosophy from the intuitive principles of mathematics: the former would have to "be comfortable with justifying their authority on account of them by thorough deduction" and therefore do not meet the criteria of an a priori.

The term axiom has three basic meanings. He describes

The classical axiom is traced back to the elements of the geometry of Euclid and the Analytica posteriora of Aristotle . In this conception, axiom denotes an immediately illuminating principle or a reference to such a principle. An axiom in this essentialist sense does not need any proof because of its empirical evidence. Axioms were seen as absolutely true propositions about existing objects that oppose these propositions as objective realities. This importance was predominant until the 19th century.

At the end of the 19th century there was a “cutting of the cord from reality”. The systematic investigation of different axiom systems for different geometries ( Euclidean , hyperbolic , spherical geometry, etc.), which could not possibly all describe the actual world, had to result in the axiom concept being understood more formalistically and axioms as a whole taking on a conventional character in the sense of definitions . As pioneering the writings proved David Hilbert to axiomatic that the product derived from the empirical sciences postulate evidence of the formal criteria of completeness and consistency replaced. An alternative way of understanding an axiom system does not simply refer to the actual world, but follows the scheme: If any structure fulfills the axioms, then it also fulfills the derivations from the axioms (so-called theorems ). Such views can be located in implicationism, deductivism or eliminative structuralism.

In axiomatized calculi in the sense of modern formal logic, the classic epistemological (evidence, certainty), ontological (reference to ontologically more fundamental things) or conventional (acceptance in a certain context) criteria for marking axioms can be omitted. Axioms only differ formally from theorems in that they are the basis of logical deductions in a given calculus. As a "fundamental" and " independent " principle, they cannot be derived from other starting sentences within the axiom system and are therefore not accessible to any proof.

In the empirical sciences, axioms also refer to fundamental laws that have been empirically confirmed many times. Newton's axioms of mechanics are given as an example .

Scientific theories, especially physics, are also based on axioms. From these theories are inferred, the theorems and corollaries of which make predictions about the outcome of experiments . If statements of the theory contradict experimental observation, the axioms are adjusted. For example, Newton's axioms only provide good predictions for “slow” and “large” systems and have been replaced or supplemented by the axioms of special relativity and quantum mechanics . Nevertheless, one continues to use Newton's axioms for such systems, since the conclusions are simpler and the results are sufficiently precise for most applications.

By Hilbert a formal axiom term was dominant (1899): An axiom is any unabgeleitete statement. This is a purely formal quality. The evidence or the ontological status of an axiom is irrelevant and is left to a separate interpretation .

An axiom is then a fundamental proposition that

It is sometimes claimed that axioms are completely arbitrary in this understanding: An axiom is "an unproven and therefore not understood sentence", because whether an axiom is based on insight and is therefore "understandable" initially does not matter. It is true that an axiom - related to a theory - is unproven. But that does not mean that an axiom has to be unprovable. The quality of being an axiom is relative to a formal system. What is an axiom in one science may be a theorem in another.

An axiom is misunderstood only insofar as its truth is not formally proven, but presupposed. The modern concept of axioms serves to decouple the axiom property from the problem of evidence, but this does not necessarily mean that there is no evidence. It is, however, a defining feature of the axiomatic method that in the deduction of the theorems, conclusions are only drawn on the basis of formal rules and no use is made of the interpretation of the axiomatic signs.

The original formulation comes from the naive set theory of Georg Cantor and only seemed to clearly express the connection between extension and intention of a term . It was a great shock when it turned out that in the axiomatization by Gottlob Frege it could not be added without contradiction to the other axioms, but gave rise to Russell's antinomy . 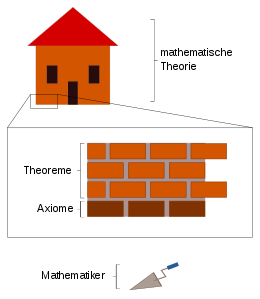 Axioms are the foundation of mathematics.

In general, terms such as natural numbers , monoid , group , ring , body , Hilbert space , topological space, etc. are characterized in mathematics by a system of axioms. One speaks, for example, of the Peano axioms (for natural numbers), the group axioms , the ring axioms , etc. Sometimes individual requirements (including the conclusions) are also called law in a system (e.g. the associative law ).

A special axiom system of the examples mentioned - the natural numbers with the Peano axioms possibly excluded (see below) - is to be understood as a definition . In order to be able to address a certain mathematical object, e.g. as a monoid (and then infer further properties), it has to be proven (with the help of other axioms or theorems) that the requirements formulated in the axiom system of the monoid all apply to the object. An important example is the sequential execution of functions, for which the proof of associativity is not completely trivial. If this proof is insufficient for one of the axioms, then the object in question

could not be regarded as a monoid. (The proof of the associativity of the Fibonacci multiplication, which goes back to D. Knuth , is extremely difficult .)

In this respect, many of the “axiom systems” mentioned are not at all (and are in direct contrast to) fundamental statements that are “ accepted without evidence” as “in-derived statements” .

Although there are other basic systems ( theories of the first order ), the Peano axioms are mostly used as a basis for counting in natural numbers without further reference. For example:

Proposals for the axiomatization of important sub-areas

Theories of empirical science can also be reconstructed “axiomatically” . In the philosophy of science , however, there are different understandings of what it actually means to “axiomatise a theory”. Axiomatizations have been proposed for different physical theories. Hans Reichenbach devoted himself a. a. in three monographs his proposal for an axiomatic of the theory of relativity , where he was particularly strongly influenced by Hilbert. Even Alfred Robb and Constantin Carathéodory laid Axiomatisierungsvorschläge the special theory of relativity before. For both the special and the general theory of relativity there are now a large number of attempts at axiomatization discussed in the philosophy of science and in the philosophy of physics . Patrick Suppes and others have proposed a much-discussed axiomatic reconstruction in the modern sense for classical particle mechanics in their Newtonian formulation, and Georg Hamel , a student of Hilbert, and Hans Hermes have already presented axiomatizations of classical mechanics. The company of Günther Ludwig is still one of the most popular proposals for axiomatizing quantum mechanics . For the axiomatic quantum field theory v. a. Arthur Wightman's formulation from the 1950s is important. In the field of cosmology , axiomatization and the like a. Edward Arthur Milne was particularly influential. For classical thermodynamics there are axiomatization proposals u. a. by Giles, Boyling, Jauch, Lieb and Yngvason. For all physical theories that operate with probabilities, especially statistical mechanics , the axiomatization of probability calculation by Kolmogorow became important.

Relationship between experiment and theory

The axioms of a physical theory can neither be formally proven nor, according to the view that has become commonplace, directly and collectively verified or falsifiable through observations . According to a view of theories and their relationship to experiments and the resulting idiom, which is particularly widespread in epistemological structuralism , tests of a certain theory in reality usually concern statements of the form “this system is a classical particle mechanics”. If a corresponding theory test is successful, z. If, for example, correct predictions of measured values ​​are given, this check can serve as confirmation that a corresponding system was correctly counted among the intended applications of the corresponding theory, and in the event of repeated failures, the number of intended applications can and should be reduced by corresponding types of systems become.

Articles in subject-specific encyclopedias and dictionaries