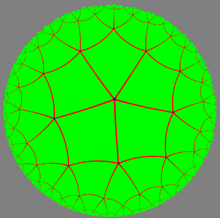 Model of a tiling of a plane with squares. More than four meet at the corners (depending on the size, here five).

The hyperbolic geometry (also called Lobachevskian geometry or Lobachevsky geometry ) is an example of a non-Euclidean geometry that is obtained if one adds the contradicting hyperbolic axiom to the axioms of absolute geometry instead of the axiom of parallels that characterizes the Euclidean geometries . This means that for a straight line g and a point P (which does not lie on g ) there is not just one, as in Euclidean geometry, but at least two straight lines ( h and i ) that go through P and are parallel to g . The fact that two straight lines are "parallel" to one another only means that they lie in the same plane and have no points in common, not that they have the same distance everywhere ( h and i only have one point P in common ).

Representations of the real hyperbolic plane

There are several ways in which the real hyperbolic plane can be represented in the real Euclidean plane. Most of these can be generalized to higher dimensions.

In each of these ways, the same abstract hyperbolic geometry is represented: the real hyperbolic plane. It is therefore possible to convert between these representations and statements in purely hyperbolic geometry are independent of the "model" used. Usually one speaks of different models in mathematics if two non-isomorphic structures satisfy the same system of axioms. In this respect, the following “models” describe the same structure, so they are just different representations of a model. However, these representations are always referred to as models in the literature, and this is also the case here. For hyperbolic planes over other bodies and more than two-dimensional hyperbolic spaces, see Metric absolute geometry .

In this representation developed by Eugenio Beltrami and Felix Klein , the following applies:

This representation is also known under the name "beer mat geometry". 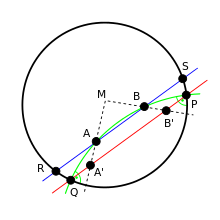 Distance between two points in a hyperbolic geometry

Are A and B , two points of the circular disk, so that by meets A and B extending chord the circle in two points R and S . The hyperbolic distance between A and B is now defined using the double ratio:

The following applies to the circular disk model by Henri Poincaré , which goes back to Beltrami :

Let A and B be two points on the disk. If the plane is understood as a complex number plane, the points A , B correspond to complex numbers a , b . The hyperbolic distance between A and B is now defined using these complex numbers:

In Henri Poincaré's half-plane model, which goes back to Beltrami:

The distance between two points of the upper half-plane is calculated using the following formula:

The hyperboloid model, which goes back to Poincaré, embeds the hyperbolic plane in the three-dimensional Minkowski space .

In the sense of Felix Klein's Erlanger program, hyperbolic geometry is the geometry of

The Beltrami-Klein model shows that hyperbolic geometry can be understood as part of projective geometry. 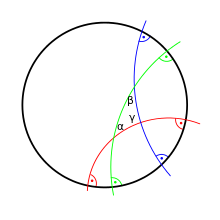 In real hyperbolic geometry, the sum of the angles in a triangle is always smaller than π (180 degrees; or two rights, if you want to avoid the angle measure). For very large triangles it can be made as small as you want. The area of ​​the triangle is calculated using Johann Heinrich Lambert's formula:

where α , β and γ are the respective angles, Δ is the area and the constant C is a scaling factor. The scaling factor C depends on the system of units used and should basically be set to 1. If the factor C is negative, one speaks of a (positive) Gaussian curvature . Similarly, Thomas Harriot previously defined the formula in 1603

for the area of ​​a triangle on a spherical surface that is formed by circles with the same radius as the sphere. The relationship applies here

Since the hyperbolic geometry requires a positive value for C , R must be due to

be about an imaginary radius.

Hyperbolic geometry in the context of differential geometry (geometries on surfaces)