János Bolyai [ ˈjaːnoʃ ˈbojɒi ] (*  December 15, 1802 in Klausenburg , †  January 27, 1860 in Neumarkt am Mieresch ), in German formerly Johann Bolyai, was a Hungarian mathematician . He worked as one of the first mathematicians in the field of non-Euclidean geometry .

Statue of János Bolyai in Cluj-Napoca

Memorial plaque in the collegiate church in Vienna

János Bolyai was the son of Farkas Wolfgang Bolyai , a professor of mathematics. Bolyai's own talent in mathematics as well as languages ​​and music was noticed early on. At the age of seven he learned the violin, made rapid progress and later appeared publicly as a violinist in Vienna. He received mathematics lessons from his father and only attended school from the age of nine, the Calvinist College in Neumarkt am Mieresch , where his father also taught.

After graduating from school in 1817, he began studying engineering at the Vienna Military Academy . The family could not afford the mathematics course they wanted abroad; his father's request to his friend Carl Friedrich Gauß to take his son in as a schoolboy had received a negative answer. János Bolyai successfully completed his engineering studies in 1822 and then devoted a year to scientific studies. In doing so, like his father, he first tried to prove Euclid's postulate of parallels and then developed fundamental features of non-Euclidean geometry by dealing with the foundations of Euclidean geometry. During this time he discussed some problems with his friend Carl Szasz (1798–1835), who went to Hungary as a teacher in 1821.

In 1823 János Bolyai became an engineer officer in the Austro-Hungarian Army (sub-lieutenant), where he initially worked on the Temesvár fortifications until 1826 . In the army he was known as an excellent fencer, as well as for his abstinence - he did not drink, smoke and stay away from the game. From 1826 to 1830 he was stationed in Arad , after 1830 initially in Lemberg . In 1827 he became a first lieutenant and in 1832 a lieutenant captain.

He developed his ideas on non-Euclidean geometry during his military service, but remained isolated and was only able to convince his father of the importance of his work during a visit in 1831. He then pushed for a publication as an appendix in his own work "Tentamen". The father also sent his book to Gauss, who acknowledged the importance in a reply letter and praised the son's achievement - he literally wrote that he was “extremely” surprised - but at the same time said that he had already made this discovery himself, something was a heavy blow for János Bolyai. At times he even suspected his father, an old student friend of Gauss, of having given him something from his previous communications.

Bolyai, who was stationed in Olomouc from 1832 , now suffered from poor health. According to his service record, there were also hypochondria and choleric tendencies. His superiors recognized the high mathematical skills, but complained about frequent ailments, a lack of inclination to work as an engineer and a tendency to isolate themselves from fellow officers and noted a pronounced passion for the game of chess. In 1833, Bolyai retired after he had previously unsuccessfully asked in 1832 - with reference to Gauss's letter - for a three-year leave of absence to devote himself to mathematics.

János Bolyai then lived on the family estate at Domáld together with Rozália Kibédi Orbán (Rosalia Orban von Kibed), with whom he had two children; As the amount of money to be raised was missing, the marriage did not take place until 1849. The marriage, which his father was hostile to, did not last long - in 1852 the couple separated. Bolyai continued to occupy himself with mathematics, for example he submitted a prize thesis in Leipzig on the role of complex numbers in geometry. In 1846 he moved to Marosvásárhely near his father. There he got to know the work of Lobachevsky on non-Euclidean geometry in 1848. Most recently he was mainly concerned with philosophy and left an extensive legacy of manuscripts that are in the Bolyai-Teleki library in Neumarkt am Mieresch. János Bolyai died in January 1860 of pneumonia in Neumarkt am Mieresch.

Like his father, J. Bolyai worked on studies of the parallel axiom . However, alongside Carl Friedrich Gauß and Nikolai Iwanowitsch Lobatschewski , he was one of the first to find a non-Euclidean geometry , an “absolutely true (hyperbolic) geometry of space”.

Little known is his philosophy, derived from mathematics, the basic ideas of which can only be reconstructed from fragments, his treatise on the soul , matter and spirit as well as from his letter to Emperor Franz Josef , which, among other things, provides practical suggestions for a new, more just financial system contains. The extensive estate of Bolyai has been deciphered by Elemér Kiss over decades.

The Babes Bolyai University of Cluj was named after Victor Babes and him . The asteroid (1441) Bolyai and since 1970 a lunar crater are also reminiscent of the mathematician . 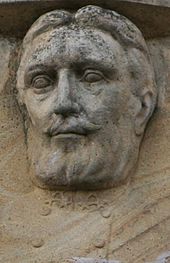 There are no portraits of Bolyai - the only one that Bolyai destroyed himself with a saber. An often copied picture, which also appeared on postage stamps on the 100th anniversary of his death in 1960 in Hungary and Romania, is not authentic, but probably shows an unknown contemporary; it is based on a painting by Mór Adler (1826–1902) from 1864, which, however, gave no information about the person depicted. Károly Lühnsdorf (1893–1958) made a drawing of it and incorrectly noted that it was a portrait of Janos Bolyai. The only representation that can possibly claim authenticity is a bust in front of the Kulturpalast in Neumarkt am Mieresch, made around 1911, when the son Dénes Bolyai (then a retired judge) and other people who knew him were still alive. But there are authentic portraits of his father, mother and son, so that in the 1990s, attempts were made to reconstruct the approximate appearance of Bolyai, for example by the painter Attila Zsigmond.

Attila Zsigmond's attempt to reconstruct the appearance of Bolyai