Olomouc is a redirect to this article. For the asteroid, see (30564) Olomouc . 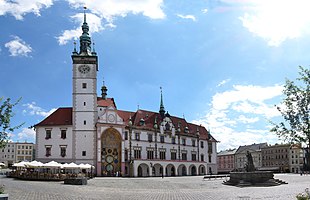 Olomouc ( Czech Olomouc [ ˈɔlɔmɔuʦ ]) is the sixth largest city in the Czech Republic and the administrative center of the Olomouc Region ( Olomoucký kraj ). The city is the seat of an archdiocese , the second oldest Czech university and one of the two Czech supreme courts. Until the 17th century it was the historical center of Moravia and today it is a commercial, cultural and administrative center.

Olomouc is located in the eastern part of the Czech Republic, in Moravia, in the Morava floodplain at the confluence of the Feistritz . The city is located in a plain open to the north-west and south-east, surrounded by higher geomorphological formations from the west and especially from the east. The city center is at an altitude of 219 m above sea level. M

The annual average temperature is 8.7 °C, the average annual precipitation around 570 mm. The average sunshine duration is 1616.7 hours per year.

The city of Olomouc consists of the districts and cadastral districts:

In the 12th century, Olomuc and Olmuc were the first surviving forms of names. In the 15th century an alleged first form Juliomontium ( Juliusberg ) was suspected, after Julius Caesar as the alleged founder. The original meaning is unclear. In Czech, Olomouc means 'bare mountain' (Old Czech holy 'bare' and mauc 'mountain'). The city's name is in the Moravian -Hanak dialect, a subgroup of the Central Moravian dialects of Czech, Olomóc or Holomóc , in German Olmütz , in Polish Ołomuniec , and in Latin Eburum or Olomucium .

Olomouc coat of arms from 1758

Description: In blue, a gold-crowned red and white chess eagle with gold armor ( Moravian eagle ) accompanied by the four gold majuscules S, P, Q, O in the four corners. The letters stand for Senatus populusque Olomucensis ( Latin for "Senate and People of Olmütz", analogous to SPQR ).

The coat of arms was decorated in 1758 with the Austrian shield and the initials "FMT" as a central shield . The occasion was the award of this part of the coat of arms by Maria Theresa in recognition of the steadfastness of Olmütz Fortress against Prussian troops under King Friedrich II. The initials stood for Emperor Franz I and the Empress. A chain was also placed around the shield as a sign of the city's fortifications. These crest improvements were removed in 1934.

In the late 7th century, the first Slavic settlement arose in what is now the district of Povel. Around 830 it was destroyed. A new castle was built on Petersberg (Předhrad), which by its size was probably one of the most important castles in the Moravian Empire. In the 9th century three churches were built.

Olomouc was first mentioned in writing in 1017, when Moravia became part of the Czech Přemyslid state . In 1055 it was the seat of a separate principality. In 1063 the diocese of Olomouc was founded by Vratislav II . Around 1070 a new castle was built. In 1077 the Hradisko monastery was founded. In 1126 Heinrich Zdik became bishop.

At the beginning of the 13th century the last Olomouc prince died, Moravia was united and placed under a margrave from the Přemyslid family. Olomouc was first mentioned as a royal town in 1248 . 1306 King Wenzel III. during a campaign to Poland in Olmütz and was murdered here, whereby the Přemyslid dynasty in the male line died out . The city developed very quickly economically and became the capital of Moravia .

In the Hussite wars , Olomouc was an integral part of the Catholic side. The Olomouc Charterhouse was founded in 1443 as a successor to the Dolein Charterhouse, which had perished in the Hussite Wars . It existed until it was abolished in 1782. In the 16th century, numerous Renaissance -style palaces were built . In 1566 the Jesuits came to Olomouc. They founded a school, which became a university in 1573. In 1588 the bishop was promoted to imperial prince .

During the Thirty Years' War , the city was taken by the Swedes in 1642 and occupied for eight years. After the Thirty Years' War, the largely destroyed and depopulated city lost its status as the Moravian capital and ceded it to Brno . Since a lot of damage had been caused by fires, a detailed "Fire Extinguishing Ordinance" was issued in 1711, which also discussed a number of preventive measures.

From 1794 to 1797 the prominent French-American soldier and politician Marquis Lafayette was interned in Olomouc as a political prisoner of the Danube Monarchy after being captured by the anti-French coalition in Flanders in 1792 and then imprisoned by Prussia for the time being .

In 1841 the city received a railway connection. In mid-1845 the railway from Olomouc to Prague ( kk Northern State Railway ) was put into operation ( Olomouc - Trübau , Trübau - Prague ). In 1848, the archbishop's palace housed the imperial court who had fled here because of the revolution in Vienna . On December 2, 1848, Emperor Ferdinand I transferred the government to eighteen-year-old Franz Joseph I. On November 29, 1850, the German Confederation was restored in Olomouc under Austrian leadership by the Olomouc Punctuation (also called the "Olomouc Treaty") between Prussia, Austria and Russia . In the years 1850 to 1866 the fortifications were expanded again. In 1886 the fortress status was abolished and Olmütz received a city ​​statute as the royal capital. In 1899 the first tram ran in the city. At the end of the 19th century, Olmütz had six Catholic churches, a Protestant church, an Israelite temple , a German and a Czech grammar school, a junior high school, a number of other educational institutions and was an industrial location and the seat of a district authority and a district court.

After the collapse of the Austrian Empire in 1918 and the founding of Czechoslovakia , the Czech townsfolk became the majority, which was mainly due to the influx of Czechs, the departure of Germans, but also the incorporation of surrounding communities with a partly Czech majority, such as the two towns of Hodolein ( Hodolany ) and Neugasse ( Nová ulice ) and eleven other communities (Bělidla, Černovír, Hejčín, Chválkovice, Lazce, Nové Sady, Nový Svět, Neředín, Pavlovičky, Povel and Řepčín) in 1919. In 1921, 57,206 inhabitants lived in Olomouc.

On March 15, 1939, the city, like the other areas of the Protectorate of Bohemia and Moravia established by the German Reich on the same day, was occupied by the Wehrmacht . In 1939 the Olomouc University was closed by the German occupation forces. Only in 1946 could it be restored under the name Palacký University in Olomouc .

In the 1970s and 1980s, several prefabricated housing estates were built on the outskirts .

The entire old town has been protected as a monument reserve since 1971. The flood in 1997 hit the city hard, about a third of the city area was flooded. In 2000, the Trinity Column was included in the UNESCO World Heritage List . After the administrative reform of 2000, the previous district seat became its administrative seat with the establishment of the Olomouc region.

The synagogue in Olomouc

The first Jews settled in Olomouc as early as 906. From 1060 they had to live in a ghetto and wear a yellow badge. In 1454 all Jews from Olomouc were expelled. This law was in effect until 1848. Six Jews were recorded in the 1857 census.

In 1865 a Jewish religious association was founded in Olmütz, from which the independent Jewish community Olmütz emerged in 1892, whose first rabbi was Berthold Oppenheim . The Olomouc Synagogue was built in 1895-1897. On the night of March 15th/16th, 1939, after the country was occupied by the Wehrmacht, the synagogue burned down as a result of arson. At the same time, around 800 Jews were arrested and later deported to the Dachau concentration camp . Some pews of the synagogue were removed, served for a long time as pews in a village church near Prostějov and were finally placed in the renovated synagogue in Krnov in 2004 . Some of them are now in the Loštice synagogue and commemorate the Jewish citizens who were murdered in the concentration camps. The honorary seat is dedicated to Berthold Oppenheim, the rabbi of Olomouc and Loštice.

During the Nazi era , 3,489 people were deported to the Theresienstadt ghetto in five transports, on June 26 and 30, 1942, July 4, 1942 and March 7, 1945 . Only 285 Jews from the town's population survived. This put an end to Jewish life in Olomouc for a long time. Only since 1989 has there been a revival of Jewish religious life in the city, and in 1991 an independent Jewish community in Olomouc was founded, also responsible for Šumperk , Jeseník , Bruntál and Přerov .

With 100,233 inhabitants, the city of Olomouc is the sixth largest city in the Czech Republic.

Olomouc has twinning agreements with the following cities:

Along with Ostrava , Olomouc is the most important economic and transport center in North Moravia.

Olomouc Main Train Station is on the main Prague – Česká Třebová – Olomouc – Ostrava / Žilina – Košice line . Other routes lead north to Šumperk and Krnov and west to Senice na Hané . Southbound routes lead to Brno and via Otrokovice (/ Zlín ) to Břeclav and on to Vienna .

The public international airport Olomouc-Neředín ( IATA airport code OLO, ICAO code LKOL) is located 3.8 kilometers west of the city center in the district of Neředín. The airfield operates under visual flight conditions only (daytime) and has two asphalt runways for microlight aircraft, 520 and 560 meters long and 30 meters wide, and two grass runways, 760 meters long and 30 meters wide. The air rescue service of the region is stationed at the airfield.

The largest facility is the University Hospital ( Fakultní nemocnice Olomouc ) with 1433 beds and 50 departments and clinics (as of 2006). From 1992 to 2004, the clinic was extensively expanded and modernized and is currently one of the most modern hospitals in the Czech Republic. The Olomouc Military Hospital ( Vojenská nemocnice Olomouc ) is the oldest military hospital in the Czech Republic. It was founded in 1748 and since 1802 has been based in the Hradisko Monastery , which is protected as a national cultural monument . There are two more private polyclinics in the town .

The food industry and mechanical engineering belong to the traditional economic sectors settled in Olomouc. by the OLMA dairy founded in 1970, the chocolate manufacturer ZORA founded in 1899 (today part of Nestlé), the pump technology manufacturers ISH and Sigma (today in Lutín near Olomouc), the Moravské železárny steel works, the salt processor Solné mlýny Olomouc or the chemical and pharmaceutical company founded in 1934 FARMAK.

The Palacký University with 21,277 (WS 2007) students is located in Olomouc. The university consists of 8 faculties and a university hospital. It was originally founded as a Jesuit college in 1573 and is the second oldest university in the Czech Republic.

The diocese was first mentioned in 1063. It was under the archbishopric of Prague until the 18th century . In 1777 Olomouc was raised to the archdiocese. At the same time, the Bishopric of Brno was established as a suffragan of the Archdiocese of Olomouc. Today the Archdiocese includes the region of North and Central Moravia. Archbishop and Metropolitan is Jan Graubner . 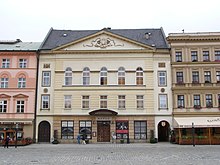 Moravian Theater on the Upper Ring

The famous Olomouc Quargel , a sour milk cheese with a strong smell, comes from here.

The historic city center was declared a municipal monument reserve in 1971.

In addition to numerous town houses, the house facades and historical portals are objects that are particularly worth seeing within the cityscape of Olomouc. These are on the Upper Ring (Horní náměstí).

Another plague column, the Mariensäule, is located on the Niederring.

The Olomouc fortifications include e.g.

The successful football club SK Sigma Olomouc and the ice hockey club HC Olomouc are based in Olomouc .

The Mattoni Olomouc Half Marathon is held annually in June . The run is classified as a gold race by the International Athletics Federation. The number of participants is over 4300 runners (2020).

Cities and municipalities in Okres Olomouc (district of Olomouc)