This article describes the city. For the settlement see Liboš .

Krnov (German Jägerndorf ) is located in the Czech part of Silesia and is the largest city in the Bruntál (Freudenthal) administrative district .

The city is located in the Moravian-Silesian Region (Moravskoslezský kraj) on the border with Poland and at the confluence of the Opava ( Oppa ) and Opavice ( Goldoppa ) rivers on the Lower Jeseníky , at the foot of the Castle Hill ( Přední Cvilínský kopec , popularly Cvilín ). The city is located in the Zuckmanteler Bergland (Oppagebirge), its southern (Šelemburk (Schellenberg), Cvilín (Burgberg), Mariánské Pole (Marienfeld), airfield) and western urban area (Kostelec (Weisskirch), Ježník (Mösnig)) on the Niederen Gesenke and the southeastern Červený Dvůr (Red Building) on ​​the Leobschützer Loesshügelland . The trunk road 45 leads through the city to the border crossing to Poland and south to Bruntál ( Freudenthal ). The international Ostrau - Wroclaw railway also runs through Krnov.

Main square with the parish church of St. Martin

Courtyard of the castle

The area was first settled in the Stone Age, around 3000 BC. Such a settlement was on the castle hill. In the 12th and 13th centuries, Bohemian dukes and kings called Germans into the country as farmers, miners, artisans, merchants and artists in order to allow them to develop and cultivate the outlying areas, which until then had been sparsely populated due to the Mongol raids. Jews and a few Wallachians also came to the country at that time. The first written mention of the place as Völkisch Kyrnow comes from a document from Wenzel I from 1240. The name Jegerdorf was used in 1253 in connection with the mention of the first Vogts Siegfried. The Latin name Carnovia can also be found in documents from the Middle Ages .

Around 1269 the hunting village belonging to the Moravian province of Opava came to the illegitimate son of the Bohemian king Ottokar II , Nicholas I of Opava , the founder of the Duchy of Opava . In 1273, the Minorite Order founded a monastery in Jägerndorf, which later developed into an important center of the order and spread far into Eastern Europe (Lithuania, Belarus, Ukraine). In 1281 the Teutonic Order also settled in Jägerndorf. It is not known when the town of Jägerndorf received its town charter, but it was confirmed in 1279 by the regent Kunigunde , the widow of the Bohemian king Ottokar II . The oldest city coat of arms dates from 1311 and shows three golden hunting horns and three silver stars on a blue background. At the beginning of the 14th century, the first handicraft businesses emerged that produced linen and cloth and thus established a tradition that was still going strong. For the first time in 1335 a lay judge was found in the city, which also had blood jurisdiction. With Peter Vogt, a mayor was mentioned for the first time in 1371. After the death of the Troppauer Přemyslid Nikolaus II. The Duchy of Troppau was in 1367 to his sons Přemysl I , Nikolaus III. , Wenzel I. and Johann I. split. Johann I received the Duchy of Ratibor as the sole heir , making him the progenitor of the Premyslid line of Opava-Ratibor. In 1377 the Duchy of Opava was divided again, with Johann I receiving the area of ​​Jägerndorf, which was elevated to the status of an independent Duchy of Jägerndorf and to which the Reign Freudenthal belonged. As a result, the owners changed frequently, several times associated with armed conflicts. In 1474 the city went up in flames.

On May 14, 1523, Margrave Georg the Pious of Brandenburg-Ansbach-Kulmbach acquired the Duchy of Jägerndorf from its previous owner, Duke Georg von Schellenberg, for 58,900 Hungarian guilders from the House of Hohenzollern . Georg soon introduced the Reformation and, among other things, secularized the Minorite monastery without encountering resistance from the population. However, he snubbed the resident Czech nobility by filling the important offices with Germans and repealing the Moravian land law. In addition to other fortifications for defense against the Turks, the margrave also had the city of Jägerndorf protected by a strong city wall and mighty city gates. Jägerndorf Castle was also included in the fortifications. The streets of the city were paved to improve hygienic conditions. When Margrave Georg expanded his power by acquiring further possessions in Silesia , he encountered resistance from the Habsburg rulers. So he could only enforce an unlimited right of inheritance for his successor for Jägerndorf. Under his son Georg Friedrich , who owned Jägerndorf from 1557 to 1603, the introduction of the Czech language in the judiciary in 1570 pacified the Czech aristocracy on an equal footing with the German. Between 1558 and 1564 the plague and numerous fires hit the city considerably. Since Georg Friedrich had no direct descendants, he bequeathed the Jägerndorfer Duchy to the Brandenburg Elector Joachim Friedrich . His son Johann Georg was commander-in-chief of the troops of the Palatinate "Winter King" Friedrich V , which is why his Bohemian possessions were confiscated by Emperor Ferdinand II after the Battle of the White Mountain . On March 15, 1623, the Emperor transferred the Duchy of Jägerndorf to his loyal supporter Karl I of Liechtenstein , who had owned the Duchy of Opava since 1613. He united the two duchies to form the Duchy of Troppau-Jägerndorf and carried out the re-Catholicization of the subjects. His descendants remained in possession of their Bohemian lands until they were expropriated in 1945.

The ruling dukes from the House of Hohenzollern were:

In the Thirty Years War the Danes, Wallenstein and Swedes devastated and plundered the area one after the other . A major fire destroyed large parts of Jägerndorf in 1706, including the Minorite monastery. In 1740 the Prussian King Friedrich II invoked the old Hohenzollern rights to the Duchy of Jägerndorf and used this as an opportunity to conquer Silesia . After the preliminary peace in Breslau , which ended the First Silesian War in 1742 , the Duchy of Jägerndorf remained with Austria , but lost areas around Leobschütz and beyond the Oppa to Prussia. The town of Jägerndorf became a border town. During the War of the Bavarian Succession in 1778, the Prussians and Austrians took part in a skirmish near the town of Weißkirch.

With the establishment of the central administration for Austrian Silesia in Opava , Jägerndorf lost much of its importance from 1793. With the introduction of the Austrian constitution of 1849 the Duchy of Jägerndorf became extinct. In the middle of the 19th century, however, Jägerndorf developed into an important industrial center. This was facilitated by the construction of the Moravian-Silesian Central Railway , through which the city was connected to both Wroclaw and the northern Vienna – Krakow railway. In addition, the line crossed there with the Upper Silesian Railway with connections to Racibórz in Silesia and Olomouc in Moravia. The products of the 27 companies in the Jägerndorfer cloth industry were world-famous. The Rieger Orgelbau company also achieved world renown . There were also several machine factories, including a large loom and weaving machine plant. 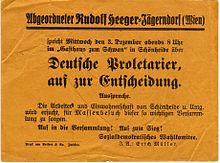 Rudolf Heeger was a member of the Jägerndorf parliament in Prague

Establishment of the Czechoslovak Republic

One of the successor states of Austria-Hungary after the First World War 1914–1918 was Czechoslovakia . They claimed the German-speaking areas of Bohemia, Moravia and Silesia for themselves, although their residents pleaded for them to remain with German Austria (later Austria ). The Treaty of Saint Germain ruled in favor of Czechoslovakia. With the establishment of the Czechoslovak administration, the city received the official place name Krnov and became the administrative center of the district of the same name.

The Great Depression in the early 1930s led to the decline of numerous businesses in the city. On December 1, 1930, 23,464 inhabitants lived there, 90 percent of them German. As part of the implementation of the Munich Agreement , German troops occupied the city in October 1938. Jägerndorf became the seat of the district of the same name . This was subordinated to the newly formed Reichsgau Sudetenland in April 1939 and was there under the administrative district of Troppau . By the census on May 17, 1939, the population had increased to 25,522. 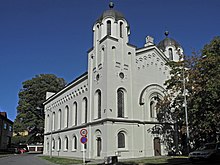 After the Jews were expelled from the Troppau-Jägerndorf area in the 16th century, 17 families had resettled in Jägerndorf by 1860, forming a cultural association that consisted of 55 families around 1870. After 1938 the Jewish community, which had around 600 members, was expropriated and some of them were deported to concentration camps. Among them were important personalities of the city such as the textile manufacturers Wilhelm and Jakob Bellak, the textile traders Geiringer and Schulhaber, the producer of the herbal liqueur grandfather Siegfried Gessler, the teacher at the Siegmund Langschur state secondary school, doctors and lawyers. Around 80 percent of them fell victim to the Holocaust , and a small number were able to flee. Transferring their property back after the war was extremely difficult. In the 2001 census, not a single inhabitant of Krnov claimed to be a member of the Jewish community.

End of World War II and after

In 1945, hunters village belonged to the district Jägerndorf in the administrative district of Opava in the Reich District of Sudetenland the German Reich . On May 6, 1945, two days before the end of World War II , the Red Army occupied Jägerndorf. After the end of the war, the city came back to Czechoslovakia. After the end of the war there were anti-German measures by national Czech militias and revolutionary guards. In June, a part of the German population was interned in three camps and the majority of them by the year 1946 after Germany reported . The city was mainly repopulated by Moravians, Slovak Sinti and Roma and civil war refugees from Greece .

The company Krnovské opravny a strojírny (KOS) (see also Aliance TW ), which emerged from the railway repair shop of the Moravian-Silesian Central Railway , with around 600 employees, started producing trams after 2001, based on types from Tatra . Another company is the beverage manufacturer Santa nápoje, which produces Kofola among other things .

In Krnov there was a study center of the Silesian University of Opava , which was closed in 2016.

Departure of a train at the Krnov railway station

Krnov is located on the Opava-Olbersdorfer Reichsstraße (today I / 57), which leads from the Polish part of Silesia to Slovakia . To the north of the city is the Bartultovice border crossing . The road I / 45 leads through the city to Leobschütz .

The local bus service is operated by Veolia Transport Morava .

Krnov located on the railway 310 from Opava ( Opava ) to Olomouc ( Olomouc ) and the track 292 on Bad Ziegenhals ( Głuchołazy ) according Freiwaldau ( Jeseník ) . Until 1945 there was also a railway line to Leobschütz in Poland .

Pilgrimage Church of the "Holy Mother of God in Sorrows"

Ansbach in Bavaria has been the sponsor town for Jägerndorf since July 14, 1954 . The sponsorship arose from the old historical connection and from the efforts of Bavaria to integrate the Sudeten Germans economically, culturally and socially. In the “Jägerndorfer Heimatstuben” set up in Ansbach, exhibits from the history of the Duchy of Jägerndorf can be viewed in six rooms . The city archive is located in the cultural center of the city of Ansbach, in which the “Jägerndofer Heimatarchiv” is also classified.

Mayor of the city

Honorary citizen of the city