The title of this article is ambiguous. Further meanings are listed under Karben (disambiguation) .

Karben is a town in the Wetterau district in Hesse . It is located about 15 kilometers northeast of Frankfurt am Main . The river Nidda runs through the districts of Okarben , Klein-Karben and Groß-Karben .

Karben consists of the districts of Burg-Graefenrode , Groß-Karben , Klein-Karben , Kloppenheim , Okarben , Petterweil and Rendel . Each of the seven districts has its own local council , each of which has a local mayor as chairman. The smallest district in terms of population is Burg-Graefenrode, in terms of area Kloppenheim. The largest part of the city by population is Klein-Karben, and by area again Groß-Karben.

The city of Karben was created on July 1, 1970 as part of the regional reform in Hesse through the voluntary amalgamation of the previously independent municipalities of Groß-Karben , Klein-Karben , Kloppenheim , Okarben and Rendel . The place name "Carben" is documented from the 9th century and appeared in the year 827 in dated transfers of goods to the monasteries of Lorsch , Hersfeld and Fulda . With its first documentary mention as “Rantuvilre” in 774, Rendel is the oldest part of Karben. During the Staufer period there was probably an imperial estate in what is now the district ; then there was one below the castle Münzenberg , for Freigericht Kaichen , for Friedberg and the Grand Duchy of Hesse . The Okarben district, formerly called "Akarben", was built on the site of a Roman fort .

L-shaped castle of the Teutonic Order in the Kloppenheim district

Manor house of the Leonhard Castle in Groß-Karben

In the Middle Ages two noble families can be identified who named themselves after the place: The Lords of Carben and the Dugel of Carben . Both provided several castle men and burgraves in the Reichsburg Friedberg . In the district of Kloppenheim there had been a Teutonic Order Coming since the 13th century , whose center was later formed by the Teutonic Order Castle Kloppenheim . The properties there are now popularly referred to as “Castle”, as is the property of the Leonhardi family in the Groß-Karben district. The upper castle is located in the Burg-Graefenrode district and served as the seat of the von Carben family until it died out in 1729. Hulshofen , another place between Okarben, Petterweil and Groß-Karben, became a desert in the 15th or 16th century .

The formerly independent municipality of Burg-Graefenrode was incorporated into Karben on December 31, 1971. On August 1, 1972, the further merger with the municipality of Petterweil took place . Alongside Dietzenbach and Neu-Anspach, the extensive commune was declared an exemplary development focus in the rural area just outside Frankfurt for a number of years. However, the 30,000 to 50,000 inhabitants forecast for Karben could never be reached in the following years either.

Due to the history of its origins, Karben had hardly any typical city structures until the 1990s . In the run-up to the regional reform in Hesse, city planners initially expected rows of buildings from Kloppenheim to today's indoor leisure pool. Concrete brutalism was to have a major impact on the city center, car traffic in turn should run on several levels and a cable car should regulate local public transport in the city. The amalgamation of the formerly independent municipalities prevented the formation of an urban center for decades ; For a long time, residents followed their errands in the respective districts or neighboring communities such as Bad Vilbel or Hanau .

From the mid-1990s onwards, the city government promoted various urban development measures with the aim of creating a new center along Bahnhofstrasse. The implementation of concrete first projects began in 1998 with the opening of the City Center at the intersection with Robert-Bosch-Straße, in the immediate vicinity of which another shopping center was built in 2005 and 2006 with the Selzerbrunnencenter . The Luisenthaler Straße building area followed in 2010 as well as another ensemble along the city roundabout, consisting of the Rewe store, Frankfurter Volksbank branch and the “Bellevue” residential and commercial building. As of 2017, both the residential area at Taunusbrunnen and a complex for shops, restaurants, hotels and living on the triangular property diagonally opposite were built in the city's core area.

Population development of Karben from 1945 to 2015

In the course of the regional reform in Hesse:

From the time the city was founded, the SPD initially had absolute majorities in the city council. Between 1997 and 2006 the city parliament was supported by a parliamentary majority of a red-green coalition . From the Hessian municipal elections in 2006, there was a majority coalition of the CDU , FWG and FDP , since the Hessian municipal elections in 2016 , the CDU has an absolute majority and works without a coalition.

The first mayor of Karbens was Gerd Klein. His term of office ended prematurely in 1972 after almost two years after Karben was legally forced to dissolve for a short time in order to incorporate the previously independent municipality of Petterweil. Klein and Petterweil's mayor Albert Schäfer were appointed state commissioners for the transition period; later Schäfer was elected as the new mayor.

The current mayor is Guido Rahn . He was directly elected as the new mayor on September 27, 2009, and on April 1, 2010 he succeeded the Social Democrat Roland Schulz. This makes him the first Christian Democratic mayor since the city was founded. In 2016, Rahn defended his position against a candidate from the SPD .

The three sheaves were taken from the local coat of arms of Okarben, originally they come from the coat of arms of the local aristocratic family Dugel von Carben , but there in silver on a blue background and not lined up. They make the coat of arms " talking " (sheaves = carbs). The eagle heads from the coat of arms of Rendel indicate that the place (and the other parts of the city today except Petterweil) belonged to the Kaichen court in the Middle Ages and the early modern period. They are modified imperial eagles, which is explained by the fact that this free court was in the possession of the Reichsburg Friedberg for a long time .

Karben is located around 15 kilometers north of Frankfurt am Main in the urban agglomeration of Frankfurt / Rhein-Main in the middle of the Niddaaue between Taunus and Vogelsberg . The city is accessed via the Frankfurt-Gießen transport axis with Bundesstraße 3 . The closest motorway connections are Friedberg ( federal motorway 5 , junction  16) in the north and the Preungesheimer Dreieck ( federal motorway 661 , junction 8) in the south. In addition, the route of the Main-Weser Railway runs over the Karben district. The city is connected to it with the Groß Karben train station on the outskirts of the Kloppenheim district and the Okarben stop . The two closest railway stations, the main train station Frankfurt and the separation station Friedberg are, with the S-Bahn - S6 reach.

The local city ​​bus network , which includes the three bus routes 72 (Friedberg - Groß-Karben), 73 (Petterweil (partly Rosbach) - Groß-Karben) and 74 (Rendel (partly Gronau) - Groß-Karben), is connected to the regular bus service in the evening hours, in turn, supplemented by a collective call taxi . Since December 2012, a night bus line has also been connecting Karben with Bad Vilbel and Frankfurt am Main between 1:30 and 3:30 a.m. Since June 2014 there has also been an express bus line which is an extension of an existing line between Bad Homburg and Königstein and runs every 60 minutes between Karben and Bad Homburg. It opens up the connection to the neighboring municipality after the city of Frankfurt discontinued the connection to Petterweils by bus route 65 in 2011 due to a lack of passengers.

Since the 1970s, due to the relatively high load of around 15,000 vehicles per day in the narrow Bahnhofstrasse in the Groß-Karben district, a northern bypass with connection and derivation of the L3351 and K246 has been required. This project was planned and approved by the State of Hesse around 2010; however, it has not yet been placed on the urgency list. In order to accelerate the construction project, the Karbens magistrate signed a contract at the beginning of May 2012 to pre-finance the construction costs of 16.2 million euros. After the preliminary archaeological investigations, the construction work for the 3.2 kilometer long bypass could begin in early 2013. Residents in the residential areas in the north of Groß-Karben had initially resisted the project; they received a special soundproof wall from funds from the city of Karben. The northern bypass was opened to traffic on November 30, 2016 and cost 17.5 million euros. 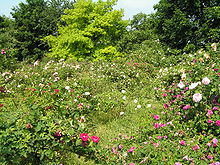 The Karben rose slope lies above the village at the cemetery. It is about 5000 square meters of land with old trees, on which over 700 different historical roses have been planted since 1993. The freely accessible rose slope is not a rose garden in the classic sense. The roses grow in a natural environment according to their natural habit. In many cases, the old rose varieties that have been planted only have one flowering phase per year. Especially in June, the rose slope is a sea of ​​flowers and scents. The Rose Festival has also been taking place in June since 2001.

In the geotope you can look at the soil layers and find fossils that come from the Wetteraussee, which covered the Rhine-Main area 23 million years ago. The west-exposed slope of the geotope is partly responsible for the fact that very little loess was blown there during the last ice ages . As a result, the ground cover is very low and access to the bedrock in the subsoil is easier to reach. This is very popular with scientists because it is easy to do research there.

Communities in the Wetterau district