The title of this article is ambiguous. Further meanings are listed under Nidda (disambiguation) .

Nidda is a town in the Hessian Wetteraukreis in the natural area Unterer Vogelsberg . It owes its name to the river Nidda .

Nidda from the southeast ( Valentin Wagner , 1633)

Nidda - Excerpt from the Topographia Hassiae by Matthäus Merian 1655

The noble free Volkold II. , But perhaps also his father Volkold I von Malsburg , whom he followed as Vogt of the imperial abbey of Fulda over their property in the northern Wetterau , built a circular moated castle in Nidda around 1100 , which the Hohenstaufen emperors to secure the passing trade routes served. (Soon after 1604, when Nidda fell to Hessen-Darmstadt , it was torn down and replaced by a Renaissance castle .) Volkold II moved his residence from Bingenheim Castle to Nidda and founded the family of the Counts of Nidda .

In 1187, Count Berthold II of Nidda transferred the parish of Nidda together with considerable property to the Order of St. John , which then set up a commandery in Nidda . The residential and farm buildings of the order then built determined the image of the city in the following centuries. In 1205, Count Ludwig I von Ziegenhain inherited the small county of Nidda , as his mother Mechthild, sister of the last Count of Nidda, Berthold II, who had died without a male heir, had been her brother's sole heir. In 1234, Nidda was first referred to as a city in a document from Count Gottfried IV and Berthold I von Ziegenhain; In 1218 and 1223 the place was still referred to as "villa".

From 1258 to 1311/1333, the counties of Ziegenhain and Nidda were again divided from one another after an inheritance. It was not until 1333 that reunification took place. Count Johann I von Ziegenhain married the daughter Lukardis (Luitgart) of Count Engelbert I from Nidda in 1311 . He died in 1330 and his daughter remained the nominal regent until 1333. In 1333 Johann von Ziegenhain then united both counties in his hand.

After the counts of Ziegenhain and Nidda died out with the death of Johann II in 1450, the county of Nidda came into the possession of the Landgraves of Hesse . Since then, the title “Graf von Nidda” has been part of the family name in the Hesse family. At that time, the county of Nidda included the office of Nidda with the courts of Widdersheim , Rodheim , Ulfa and Wallernhausen , the rule Lißberg , the Fulda Mark with half of the bailiwicks of Echzell , Berstadt , Dauernheim and Bingenheim (with the exception of the local castle ), and the courts Burkhards and Crainfeld . A late Gothic church tower was added to the Romanesque parish church in 1491, which was extensively renovated in 2012, including the roof tower.

The statistical-topographical-historical description of the Grand Duchy of Hesse reports on Nidda in 1830:

“Nidda (L. Bez. Gl. N.) city; lies in a swampy area on the Nidda, over which a bridge leads here, as well as on the Chaussee that goes from here to Berstadt, which connects there with the Chaussee that leads from Friedberg to Grünberg. The city that is walled and provided with gates. and 486 Hess. (374 Par.) Feet above the sea, and 7 hours southeast of Giessen, has 303 houses and 1700 inhabitants, who are Protestant apart from 3 Catholics and 40 Jews. Nidda is the seat of the district councilor, one district court and the principal collector. You will find 1 beautiful church, which was built in 1617, 1 churchyard chapel, 1 tower, called the Johanniter Tower, with a beautiful bell, 1 castle, 1 town hall, 2 mills, 1 post office, 1 pharmacy. One of the buildings of the castle is inhabited by the district administrator and the other by the district judge. The castle is surrounded by a wall, which is now used as a garden. The foundations of the Altenburg lie on a mountain nearby. Among the inhabitants there are 114 farmers and 108 who do civil trades, and among the latter there are particularly many linen weavers and hosiery workers, as well as tanners. 4 markets are held annually. In 1809 Nidda was so flooded that many families had to take refuge on the second floor and almost all food was carried away or spoiled. Most residents have their cellars in front of the city leagues, and there are few cellars in the city itself. - Nidda appears several times under the name Nitahe in older Fuldischen documents, but without time determination . The Counts of Nidda, who probably took their seat here in the last half of the 11th century, undoubtedly contributed a lot to the rise of the place. A Johanniter-Ordens-Commende existed here, but its origin is unknown. But already in 1234 this order had a pastor here. Ludwig II., Count von Nidda, sold Niederleisa and Jchelshausen to the order in 1278 for 60 marks. Heilwig, Engelbert's I. Count of Nidda widow, bought the goods of the Johanniter zu Nidda in 1330, whereby and since the annual income was only eight marks, the order ceased here. These goods were donated to the Hersfeld Monastery in the same year. In a document from 1206, Count Ludwig von Ziegenhain also listed his castle men ( Castellani in Nitehe ) and the local mayor. In the period from 1218 to 1223 Nidda is called a villa , and in 1234 an oppidum . In 1323, Johann I, Count of Nidda, was enfeoffed by Emperor Ludwig von Baiern with the castle and town of Nidda and affiliations, presumably for the reason that the Fuld monastery caused difficulties. Johann II., Who had also received the enfeoffment in 1420 from Emperor Siegmund, left Nidda to Landgrave Ludwig I, who received the enfeoffment as early as 1434, from the Abbot Johann of Fuld. On August 3, 1437, the landgrave paid homage to the city that the count had granted him during his lifetime. During the Thirty Years' War, an imperial patrol party of 400–500 men attacked the city, penetrated through the gate because of neglected guards on the part of the citizens, shot the porter and spread out to plunder. But the Hessian captain Blum, who was lying with his company in the castle, with the help of the armed citizens drove out the patrol corps, which deployed several times, but finally had to withdraw, but burned a few houses in the suburbs in revenge. After the French invaded the Upper County of Katzenellenbogen in 1688 and also occupied Darmstadt, the court moved to Nidda, from where it withdrew to Giessen. "

The following list gives an overview of the territories in which Nidda was located or the administrative units to which it was subordinate:

As part of the regional reform in Hesse , the previously independent communities of Borsdorf, Fauerbach bei Nidda, Geiß-Nidda, Harb, Kohden, Michelnau, Ober-Lais, Ober-Schmitten, Ober-Widdersheim, Bad Salzhausen, Stornfels, merged on December 1, 1970 Ulfa, Unter-Schmitten, Wallernhausen and the city of Nidda to form the new city of Nidda. On December 31, 1971 Schwickartshausen was incorporated . Eichelsdorf and Unter-Widdersheim as well as a sub-area of ​​the neighboring town of Hungen with then around 50 inhabitants followed on August 1, 1972 by virtue of state law.

The population of the city of Nidda is predominantly of Protestant faith.

At the beginning of the 20th century, around 100 Jews lived in Nidda. About half were able to emigrate before the war, the others fell victim to the Nazi regime. The first stumbling blocks were laid in Nidda in February 2014 .

In June 2011 the Ahmadiyya-Muslim-Jamaat opened the Bait-ul-Aman Mosque, which is equipped with a minaret and a dome.

The mayor of the Nidda district is Rudolf Allmansberger (as of June 2013) .

According to the Hessian municipal constitution, the mayor is the chairman of the magistrate , which in the city of Nidda includes seven councilors in addition to the mayor . The position of the First City Council is administered on a full-time basis. Since April 19, 2010, the mayor has been Hans-Peter Seum. His predecessor Lucia Puttrich ended her third term prematurely after receiving a direct mandate for the Bundestag in 2009. The past mayoral elections produced the following results:

Blazon : "In black above an eight-pointed star (goat grove) in the semi-arch a silver castle (Nidda) set off in red (gate and window)."

Flag description: "The flag shows the colors black and gold, in the upper third the city coat of arms" The flag is divided vertically, black on the left and gold on the right. The colors can be traced back to the Grafschaft Ziegenhain and Nidda.

Nidda has town twinning with Crest in France , Bad Kösen in Saxony-Anhalt , Weißenstein in Austria and Cromer in England . Negotiations are currently underway for a partnership with Nida in Lithuania and Salandra (Italy).

The municipal area covers a total area of ​​1,835 hectares, of which in hectares are:

Due to the abundance of forests and water as well as the quality of the water, the paper craft in Nidda has a long tradition. Some companies based in Nidda have further developed this craft and are now industrial manufacturers with modern systems and versatile product ranges. They are important employers in the region.

Nidda is located on the federal highways 455 and 457 and on the Gießen – Gelnhausen railway with stations in the districts of Nidda, Borsdorf and Ober-Widdersheim. The Nidda train station is also the end of the line to Friedberg .

The city, together with the Wetterau district, is part of the Rhein-Main transport association .

The German Limes Cycle Route runs through the Unter-Widdersheim district . This follows the Upper German-Raetian Limes over 818 km from Bad Hönningen on the Rhine to Regensburg on the Danube . The Hessian long-distance cycle route R4 runs through Nidda . Its motto is From Sleeping Beauty to the Nibelungs . The long-distance cycle path begins in Hirschhorn am Neckar and runs from south to north through Hesse, along from Mümling , Nidda and Schwalm to Bad Karlshafen an der Weser . The total length is approximately 385 kilometers.

View of the old town of Nidda with a mill and mill wheel. 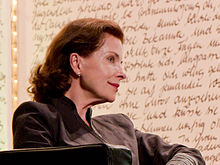 Gudrun Landgrebe in April 2012 at Nidda

Communities in the Wetterau district