The Hesse-Darmstadt extended at the end of the Old Kingdom far beyond what is now Hesse addition. The northernmost parts of the country were enclaves in the Principality of Waldeck , about the level of Kassel, the southernmost parts of the country on both sides of the Rhine , about the level of Strasbourg . The territory consisted of 10 larger, unconnected parts and also of a much larger number of smaller territorial splinters. 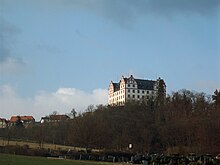 Lichtenberg Castle was built from 1570 for Landgrave Georg I, the founder of the Darmstadt line.

The sons of Philip the Magnanimous

After the death of the last (all) Hessian Landgrave Philip I ("the Magnanimous") on March 31, 1567, the Landgraviate of Hesse was divided among the four sons from his first legitimate marriage: Wilhelm received the northern one, now called Hesse-Kassel Part, Ludwig received Hessen-Marburg , Philipp Hessen-Rheinfels and Georg I received the southern part of the country, now called "Hessen-Darmstadt" .

The four ruling Hessian landgraves tried to agree on a binding legal system for all four parts of the country. However, the project failed. In 1589, Georg I therefore recourse to a legal collection that his chancellor, Johann Kleinschmidt , had compiled about 20 years earlier, and had it used by law enforcement officers in the Landgraviate of Hessen-Darmstadt.

→ Main article : Land law of the Upper County of Katzenelnbogen

After the Count of Diez , who came from the second marriage of Philip I, died out, the Hessian landgraves shared their inheritance. Hessen-Darmstadt received from this the village and castle Alsbach as well as a quarter of the Umstadt office, which was condominium with the Electoral Palatinate .

Since the Landgraves Philipp von Hessen-Rheinfels and Ludwig von Hessen-Marburg died childless in 1583 and 1604, their territories fell to their brothers, that is to Hessen-Kassel and Hessen-Darmstadt. Hessen Darmstadt inherited the offices of Schotten and Stornfels from Hessen-Rheinfels , the Hessen-Marburg inheritance was the starting point for a decade-long dispute between the two remaining lines.

To the dispute over the succession of Hessen-Marburg, there was also the denominational conflict: While Hessen-Darmstadt remained Lutheran , Hessen-Kassel turned to the Reformed branch of the Evangelicals . In response to the change of denomination forced by Moritz the Scholar (von Hessen-Kassel) at the entire Hessen University of Marburg , Hessen-Darmstadt founded the Lutheran University of Gießen in 1607 .

In 1622, the Landgraviate of Hessen-Homburg was spun off from Hessen-Darmstadt by dividing the estate .

In the Thirty Years War (1618–1648) the two Landgraviates fought on different sides, the Landgraviate of Hessen-Darmstadt on the imperial one. In this context, the unbalanced comparison of September 24, 1627 came about. As a result, Hessen-Darmstadt received most of the former Landgraviate of Hessen-Marburg, its area in Upper Hesse including the University of Marburg and its goods, the Lower County of Katzenelnbogen and the Hesse-Kassel district on the Umstadt condominium. But that did not last, rather it led to further military clashes between the two Hessian states, the Hessian War, a war within the Thirty Years' War.

The dispute was only settled with a treaty dated April 14, 1648, which was confirmed by the Peace of Westphalia concluded shortly afterwards . The profits made by Hessen-Darmstadt in 1627 were partially taken back. The Kassel Countess Amalie Elisabeth acted very successfully here. Upper Hesse was now permanently divided, Marburg and the Lower County of Katzenelnbogen (except for the Braubach Office ), the Schmalkalden Office and a quarter of the Umstadt condominium fell to Kassel, the rest remained with the Landgraviate of Hessen-Darmstadt:

In the following years, larger complexes could still be acquired:

In 1772/73 the Minister of State Friedrich Karl von Moser , who was in office from 1772 to 1780, achieved a debt settlement and restructured the disrupted state finances .

The end of the old kingdom

With the Reichsdeputationshauptschluss of 1803, Hessen-Darmstadt was able to gain considerable areas, which far outweighed the losses on the left bank of the Rhine to France:

Both Hessen-Darmstadt and the margraviate of Baden came into possession of areas that were much cheaper than the other's home lands and far removed from their own territory (according to the status of 1803). They therefore concluded an exchange agreement on March 14, 1803. After that there was

Before the territorial gains of 1803, the landgraviate had about 210,000 inhabitants, after which it had about 400,000. This massive gain exacerbated the long-standing problem that the historically grown administrative units were organized very differently and of different sizes.

The government tried to remedy this by means of two organizational edicts of October 12, 1803, which introduced a uniform administration at the top and middle levels for the entire country. Ludwig Minnigerode is believed to be the author of the edicts, and the reorganization in the margraviate of Baden, about six months older, is the model. The first edict restructured the administration, the second defined the business areas of these new administrations.

Thus the administration at the middle ("upper") level was uniform and reorganized - for the lower level this was only possible in two steps in the Grand Duchy of Hesse in 1821 and 1835. The reform of 1803 had significance beyond the end of the Landgraviate shortly afterwards, because it formed the basis for the then newly created Grand Duchy of Hesse .

A political intrigue, instigated in 1805 by Landgravine Luise Henriette Karoline von Hessen-Darmstadt , against the France-friendly Minister of State Carl Ludwig von Barckhaus, called von Wiesenhütten , led the Hesse-Darmstadt politics in an attempt to remain neutral, which pushed the Landgraviate to the edge of the Downfall maneuvered. Only the last minute of the Landgrave's turn to the French side in 1806 was only able to prevent this, but it resulted in the subsequent territorial gains being less than those of the neighbors Württemberg and Baden .

On August 1, 1806, the Landgraviate of Hessen-Darmstadt, together with the other territories, left the Holy Roman Empire of the German Nation , whereupon the Emperor laid down the crown on August 6, 1806. The empire had dissolved. On August 14, 1806, the Landgraviate of Hesse-Darmstadt was raised to the Grand Duchy of Hesse , against the position of high military contingents in France .

Coat of arms of the Landgraviate of Hessen-Darmstadt before 1736

The coat of arms of the Landgraviate is divided and split twice, fields 3, 4, 5 and 6 are each divided:

Heart shield : In blue a gold-crowned and armored lion divided nine times by silver and red ( Landgraviate of Hesse ).

The Handbook of Hessian History rates the Landgraviate of Hessen-Darmstadt as less imposing [… whose] bizarre composition can be traced back to the vicissitudes of dynastic rule .