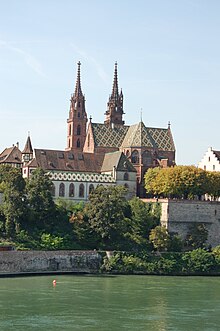 Basel Minster and Münsterpfalz, until the Reformation in 1529 the cathedral of the diocese and residence of the prince-bishop

Pruntrut Palace , residence of the Basel prince-bishops from 1527–1792

The prince-bishopric of Basel was the secular domain of the bishops of Basel , who were here as prince-bishops and imperial princes . The ruled area did not coincide with the area of ​​the diocese of Basel , but was much smaller; However, parts of the dominion belonged to other Catholic dioceses. Not only because of this, the prince-bishopric was an extremely complex structure: depending on the area, German or French was spoken and the Reformed or Catholic denomination was predominant, and parts of it had been part of the Swiss Confederation since the late Middle Ages.

The prince-bishopric existed from 999 until the secularization of 1803.

While Basel has been mentioned as a bishopric since around 400 AD, the history of the prince-bishopric as a secular territory began in 999 AD with the donation of the Münster-Granfelden Abbey by King Rudolf of Hochburgund to the diocese of Basel, whose bishop was at that time Adalbero II was. King Rudolf entered 1006 Basel as a pledge to his nephew, the German king Henry II. , From which the city - until then to Upper Burgundy belong - in the Holy Roman Empire annexing. Heinrich II, in turn, gave Bishop Adalbero the high level of jurisdiction over Basel and the right to mint coins. Although documents are missing, it is assumed that the bishop "had achieved complete spiritual and secular rule over the city of Basel around the year 1000."

The Roman-German King Frederick II granted the city the right to appoint a council that was independent of episcopal election or approval. However, this right to protest by Bishop Heinrich von Thun was revoked by imperial princes and king in 1218. Nonetheless, the city and citizens gradually gained self-government in the period that followed. In 1263, Bishop Heinrich von Neuchâtel gave the city a constitution. In 1273 the episcopal city bailiwick became an imperial bailiwick. Financial difficulties caused later bishops to gradually pledge their regalia to the city in exchange for loans, so that in 1386 the actual rule of the bishop over the city was extinguished. Formally, however, the city still gave the bishop an annual oath of allegiance until the Reformation (1521).

Franz Xaver von Neveu was the last prince-bishop of Basel from 1794-1803. In 1803 the prince-bishopric was dissolved like almost all spiritual principalities in the course of secularization after it had been largely occupied by France since 1792. In 1815, the Congress of Vienna allocated the French-speaking part and the Laufental to the canton of Bern . The Birseck was attached to the Canton of Basel .

The Principality of Basel had a seat and vote in the Imperial Council of Dukes . It was there one with the Bishopric of Brixen alternating Virilstimme and took a seat on the spiritual prince Bank one.

The prince-bishopric also had a virile vote in the district assembly of the Upper Rhine Empire .

The contribution to the Roman months fixed at the Diet of Worms in 1521 was two mounted soldiers and fifteen foot soldiers, or 94 guilders.

The princedom's estates consisted of four banks: clergy, nobility, cities and bailiwicks. The abbot of Bellelay Abbey held the office of President of the Estates.

Legally, the Principality of Basel consisted of two parts: the area north of the Klus von Court and Pichoux was part of the Holy Roman Empire and belonged to the Upper Rhine Empire; the area south of it was outside the legal system of the empire and was bound by the Swiss Confederation . The Moutier-Grandval provost was divided politically and religiously into the Catholic Prévôté sous-les-roches and the Protestant Prévôté sur-les-roches .

The Bishop of Basel used the red episcopal crook ( Baselstab ) on a white field as a coat of arms . The oldest colored evidence for the coat of arms can be found in the Zurich coat of arms roll around 1340.

Protected by the Confederation with a Protestant denomination

The bishop's chair in Basel was mostly occupied by the aristocracy of Upper Austria ; since the 16th century these have been the families Utenheim , Gundelsheim , Lichtenfels , Blarer von Wartensee (three prince-bishops), Rinck von Baldenstein , Ostein , Ramstein , Schönau-Zell , Roggenbach (two prince-bishops), Reinach-Hirtzbach , Reinach-Steinbrunn , Froburg (Montjoie) , Wangen-Geroldseck and Neveu . In general, the connection between the Upper Austrian seat of government Freiburg im Breisgau and the bishop's residence in Porrentruy was very close. A prime example is the career of the first archivist and provincial historian both in Front Austria and then in the diocese of Basel, Leonard Leopold Maldoner (born 1694 in Waldshut , died in Porrentruy in 1765), who first worked in Freiburg and in 1749 after a dispute with the front Austrian authorities became the employer changed. The country descriptions Brisgovia vetus et nova and Historia Basiliens , pioneering work for both countries, come from him. Today's Freiburg regional council of the state of Baden-Württemberg has its seat in Basler Hof . 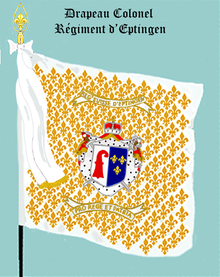 From 1758 the Prince-Bishop of Basel participated in the provision of Swiss troops in French service for the royal house of the Bourbons 1589–1792 by setting up the regiment of Eptingen with the Strasbourg garrison . The regiment of Eptingen received the number 70 and was designated as "Prince Bishop", 11th Swiss Regiment.

Used in 1769 for the conquest of Corsica and especially in garrison service in France. In 1791 the regiment became the 100th Infantry Line Regiment and in 1792 - with the dismissal of the Swiss - with French soldiers.