An imperial prince ( Latin princeps regni or imperii ) was a nobleman in the Holy Roman Empire , a prince who originally received his fiefdom only and directly from the king or emperor . So there was a feudal and constitutional imperial immediacy . When later also spiritual imperial princes gave individual secular imperial princes direct imperial dominions as fiefs, these fiefs (as imperial after fiefs) retained their immediate quality.

In the late Middle Ages , the imperial princes developed into a separate estate in the legal sense . The title of imperial prince and the imperial immediacy contained therein in connection with almost unlimited sovereignty formed a certain legal security against another, more powerful nobleman making a prince dependent on himself.

How exactly it came to the formation of a prince's own estate in the high medieval empire is often unclear due to a lack of sources. In many cases, extensive ownership (allodies) formed the basis of the sovereign rulers that were being formed. Before the middle of the 12th century, the term prince ( Latin princeps , "the first") was used in a general, broad sense and referred to high-ranking clergy and lay people, but sometimes also ministerials . The term was not precisely defined at the bottom. With "Prince" was meant the social rather than the legal role of the so named.

From around 1180 ( Gelnhausen document ) the title of prince or imperial prince was then reserved for a selected group of secular and clerical nobles who had special privileges. In order to belong to the secular imperial princes, the regalia , i.e. the assignment of originally royal rights, such as the levying of customs duties and the right to mint coins, had to be done by the king himself. As a result, they were assigned the third of the military shield levels in the Reichslehnsverband and made them partakers of the Reich's power. The first shield was held by the king / emperor, the second by the archbishops, bishops and abbots / abbesses. The dividing line thus ran between the third shield of the secular princes and that of the free lords who wore the fourth shield.

Originally it was also valid for the secular imperial princes that they must have received their fiefs directly from the king. However, since many secular nobles had received imperial abbey bailiffs as fiefs from clerical princes, it was probably also allowed with regard to these that a feudal dependency not only on the kingdom, but also on spiritual imperial princes could exist. The Sachsenspiegel accordingly assigned the secular princes the third stage of the military shield sequence.

However, the criterion of imperial immediacy of the fiefs was not sufficient for the later imperial princes (and imperial counts) to acquire imperial status, since many counts and free lords also had imperial direct property, but this alone did not allow access to the imperial princes. Therefore, there were other criteria under state law, that is, the prince had to have a superior territorial rule similar to a duchy over a country (almost sovereign sovereignty) with high jurisdiction. Since the beginning of the 13th century, a formal elevation to the imperial prince status had to take place, as was the case for the first time in 1235 with the elevation of the Guelph own property to the Duchy of Braunschweig-Lüneburg by Emperor Friedrich II , whereby Duke Otto also made the child the imperial prince was raised. Another example is the elevation of the Hessian landgrave Heinrich I to the rank of imperial prince in 1292 . However, no subsequent surveys were made for the territories that have long been considered imperial principalities, such as the margraviate of Brandenburg or the palatinate near the Rhine.

Around the year 1190, 92 clergy, but only 22 secular nobles, who were made up of 14 families, can be identified who were recognized as imperial princes. The secular imperial princes included the King of Bohemia , the Dukes of the Empire, the Margraves of Brandenburg , Meissen and Namur , the Count Palatine of the Rhine , the Landgrave of Thuringia and the Count of Anhalt . Up until the end of the Middle Ages, the numerical disproportion between ecclesiastical and secular imperial princes was somewhat corrected by elevation and division as a result of inheritance of territories and admission to the imperial prince class under customary law.

The process of the development and differentiation of the definition of the imperial prince's status dragged on until the 14th century. 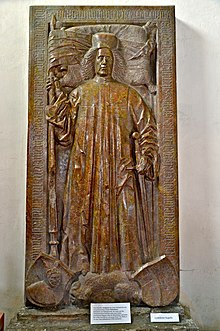 According to the imperial register of 1521 , the spiritual imperial princes included the four archbishops of Magdeburg, Salzburg, Besançon and Bremen as well as 46 other bishops. This number decreased to 33 by 1792, including the two archbishops of Salzburg and Besançon and 22 bishops. The Archbishoprics of Magdeburg and Bremen , which had become Protestant, and the dioceses especially in the north and northeast, which were initially under the rule of Protestant administrators after the Reformation , were largely secularized and divorced by neighboring princes in the decades after the Reformation and at the end of the Thirty Years War thus from the status of the spiritual imperial princes. There was also mediation and the withdrawal of areas from the empire. For example, the dioceses of Valais, Geneva and Lausanne became federal and Cambrai, Verdun, Metz and Toul became French. The imperial princes of the Middle Ages and early modern times also included the ruling houses from imperial Italy . The imperial property, especially in northern Italy, had been divided into numerous fiefdoms of the empire since the high Middle Ages . Among them were ten larger areas and about 250 smaller fiefdoms. In the empire, the archbishop of Cologne was responsible for Italy as the imperial arch-chancellor , the feudal recipients of the empire and thus the imperial princes included houses such as the Estonians (since 1452 in the Duchy of Modena ), the Medici (since 1575 in the Grand Duchy of Tuscany ), the Gonzaga ( since 1433 in the Duchy of Mantua ), the Ludovisi (in the Principality of Piombino ) or the Doria (since 1760 in Torriglia ). The Duchy of Savoy (in Piedmont ) belonged to imperial Italy at least until it was elevated to kingship in 1720; the country had a special role because it belonged to the Upper Rhine Empire and had a seat and vote in the Reichstag .

After all, the number of imperial princes was restricted by dynastic coincidences as early as 1582 at the Augsburg Reichstag . The imperial estate was tied to the territory of the prince. If a dynasty went out, the new territorial lord took over the imperial estate; in the case of inheritance divisions, they took over the heirs together.

The Reichsfürstenrat in the Reichstag, also known as the Fürstenbank, consisted of the Spiritual Bank and the Secular Bank. The basis for determining the right to vote of the imperial princes were the imperial registers, which name the imperial directors for the individual sexes. Especially in the 14th-16th In the 19th century, they are flawed in places because unauthorized genders “sneaked in” in order to increase their importance and to evade the national taxation of the large territories, even with their own territories of very dubious imperial immediacy.

The most important of the princes were at least superior to the ecclesiastical electors in terms of power and size of the ruled territories and therefore demanded political and ceremonial equality between the imperial princes and the electors since the second third of the 17th century.

Of the princes with imperial estate shaft , which is the direct imperial princes sit and vote in the Imperial Council of the Reichstag to distinguish, the mere Reich Titularfürsten, ie those princes who, without obtaining the imperial estate shaft by the Holy Roman Emperor her prince title as a mere Received a title that was valid throughout the empire, but neither meant an increase in status, nor implied the imperial status. With Section 197 of the Last Reichs Farewell of 1654, it was also determined for a number of named sexes who were to be raised to the imperial prince status that their elevation only takes place “ad personam” until they are provided with “immediate imperial imperial goods " to have. The House of Liechtenstein , for example, was elevated to the hereditary titular prince of the Holy Roman Empire as early as 1608, but it took almost a hundred years before the opportunity arose to buy the direct imperial rule of Schellenberg in 1699 and the county of Vaduz in 1712 , with an imperial diploma in 1719 Charles VI were united and raised to the Imperial Principality of Liechtenstein , which made admission to the Imperial Council of the Reichstag possible, since this was reserved for the introduction and admission.