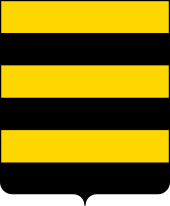 Gonzaga was the family name of the Dukes of Mantua , one of the most famous Italian noble families .

From 1329 they ruled the city commune in Mantua as imperial vicars, from 1362 as counts, from 1433 as margraves and from 1530 as dukes. The duchy was an imperial territory in imperial Italy . The dukes represented the interests of the Habsburg emperors. The main Mantuan tribe became extinct in 1627, sparking a war of succession between the emperor and France. The Gonzaga line of the Dukes of Nevers and Rethel, which followed with French help in Mantua, lost its rule to the Habsburgs in 1708 in the War of the Spanish Succession and was extinguished immediately afterwards. Side lines existed longer, one of which still exists today.

Ludovico III. Gonzaga and Barbara von Brandenburg with their children, fresco by Andrea Mantegna in the Castello di San Giorgio, Mantua, around 1470

Castello di San Giogio, a wing of the Ducal Palace in Mantua

The Gonzaga are proven under the name Corradi di Gonzaga since the 12th century as tenants of the Counts of Casaloldo at the Gonzaga Castle near Mantua . In Mantua, after the murder of their brother-in-law, they ruled from 1328 to 1708 as the successor to the Bonacolsi family , who had been in power there since 1276: in 1329 Emperor Ludwig IV enfeoffed Luigi I (also Ludovico I) Gonzaga with the imperial vicariate Mantua, in 1362 they were made counts. In 1433 Gianfrancesco I Gonzaga took the title of Marquis (Marchese) and in 1530 Federico II that of Duke of Mantua. Ludovico III. Gonzaga married Barbara von Brandenburg in 1433 , his son Federico I Gonzaga in 1463 Margarete von Bayern . In 1460 Andrea Mantegna became court painter in Mantua. In 1536 the family received the Margraviate of Montferrat (Monferrato) by marriage, in 1539 the county of Guastalla by purchase, and thus reached the height of its political and cultural importance. Politically, she leaned on the Habsburgs and represented their interests in the complicated Northern Italian game of the powers Savoy, Milan, Parma and Venice.

The main tribe went extinct in 1627, which sparked the Mantuan War of Succession . The emperor tried to withdraw Mantua as a completed imperial fief, but at the end of the war the Duke of Nevers and Rethel also received the Duchy of Mantua from a younger French line of the Gonzaga. France had intervened in his favor and the emperor needed his troops for other scenes in the Thirty Years War . Nevers and Rethel were sold to Cardinal Mazarin in 1659 . During the War of Succession, the Duchy of Mantua suffered a loss of three quarters of its inhabitants and a completely ruined state finances. As early as the 1680s, the duchy had to sell the strategically important Casale to France.

Only the War of the Spanish Succession (1701–1714) ended the dispute in the spirit of Emperor Leopold I. The last Duke, Ferdinando Carlo von Gonzaga-Nevers , Duke of Mantua and Montferrat, had sided with the French, which gave the emperor cause to withdraw the duchy - a pledge of the Holy Roman Empire - for gross infidelity to the liege lord on June 30, 1708. The area was united with the already Habsburg duchy of Milan . The rest of Montferrat fell to Savoy. The last Duke Carlo IV (1665–1708) died a few days later. He had no legitimate children from two marriages, but had six bastards with whom the line was extinguished.

Most of the Gonzaga branch lines also died out in the 18th century: The Princes of Bozzolo in 1703, the Counts of Novellara in 1728, the Dukes of Guastalla in 1746, the Marquis of Luzzara in 1794. Only one branch of the Princes of Vescovado, descendants of Giovanni Gonzaga ( 1474–1525), still exists today (see below).

The rule of Mantua

Coat of arms of the Dukes of Mantua

The regents of Mantuas from the Gonzaga family were:

The Duchy of Mantua then fell to the younger Gonzaga-Nevers line:

In 1708 Mantua was taken over by the Habsburgs as a result of the War of the Spanish Succession .

A sideline still flourishes today, the Gonzaga di Vescovato , descended from the youngest son of Federico I Gonzaga , Giovanni Gonzaga (1474-1525), who in 1519 acquired part of the Vescovato (Lombardy) rule . In 1559 they were made margraves and in 1593 imperial princes. The generals Maurizio Ferrante Gonzaga and Ferrante Vincenzo Gonzaga (1889–1943) belonged to this line . The current head of the line, Don Corrado Alessandro Marchese Gonzaga, Principe del Sacro Romano Impero (* 1941), bears (in primogeniture ) the title of prince of the Holy Roman Empire as well as the titles Marchese Gonzaga, Conte di Villanova, Conte di Cassolnovo, Marchese del Vodice , Signore di Vescovato, Patrizio Veneto. The family lives in their palazzo in Milan, built in 1906, as well as in the castle they inherited in Cavernago .

The duchies of Nevers and Rethel

Coat of arms of the Gonzaga de Nevers

The duchies of Nevers and Rethel were in 1659 by Carlo III. sold to Cardinal Mazarin . His son Carlo IV ruled the Duchy of Mantua until 1708. 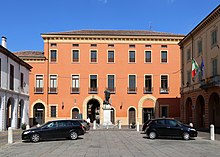 The regents of Guastalla from the Gonzaga family were:

Guastalla falls to the Habsburgs and is united with the Duchy of Parma and Piacenza.

The dominion of Montferrat (Monferrato)

The Margraviate of Montferrat , which was raised to the duchy , came about in 1533 through the marriage of Duke Federico II of Mantua with Margaret, daughter of Wilhelm XI. from Montferrat to the Gonzaga. The regents of Montferrat from the Gonzaga family were:

Carlo IV sold Montferrat to Louis XIV of France in 1681 . Montferrat fell entirely to Savoy in 1708 , which had already received parts in the Mantuan War of Succession in 1631.

From two families of Mantuan court officials who - without being related - were given the surname Gonzaga by Francesco II in 1506 (family Guerrieri) and 1518 (family Valenti) and who were soon given the nobility title Marchese :