Casale Monferrato ( Piedmontese Casal , in the local dialect Casà ) is a municipality with 33,592 inhabitants (as of December 31, 2019) in the Italian province of Alessandria (AL), Piedmont region .

The patron saint of the place is Sant'Evasio.

View of the Montferrat hills , summer 2005

The place is located on the right bank of the Po at an altitude of 116 m above sea level, surrounded by the hills of Montferrat . The municipality covers an area of ​​86.32 km² .

The bishop of Asti , Sant'Evasio, named the small village Casale (after the Italian word for country house). The first written mention of the name dates back to 988.

After Charlemagne gave the village to the church of Vercelli , it regained its freedom under the rule of Frederick Barbarossa . In 1215 it was sacked successively by the troops of Vercelli, Alessandria and Milan , and five years later it was rebuilt and fortified. From 1305 the place was ruled by the paleologists , between 1370 and 1404 it fell under the control of the Visconti and then returned under the Marquis of Monferrato , in 1474 the settlement was granted city rights.

As a result of the treaty concluded between France and Spain in the framework of the Peace of Cateau-Cambrésis in 1559, the city came under the rule of the Gonzaga family from Mantua , who made Casale a fortress. In the Mantuan War of Succession (1629-1631), French troops moved into Casale; Spanish troops besieged the city and the fortress in 1629 and 1630. In 1681 Duke Ferdinando Carlo von Gonzaga-Nevers sold the city ​​and fortress Casale to France for 100,000 pistols and an annual pension of 60,000 lire. Vauban had Casale expanded into the most modern fortress in Italy. However, as early as the War of the Palatinate Succession (1688–1697) it became apparent that the fortress was not as strong as hoped. When the troops of the Augsburg Alliance besieged Casale, the French garrison had to capitulate on July 9, 1695. In the War of the Spanish Succession , Duke Ferdinando Carlo von Gonzaga-Nevers sided with France; Emperor Joseph I thereupon recognized that he was betraying the empire , in 1708 seized the part of the Duchy of Montferrat , including Casale, which remained with the Gonzaga family , and in 1713 transferred it to the Savoy family.

On March 23, 1849, the day on which the Kingdom of Sardinia lost the First War of Independence against the Empire of Austria in the Battle of Novara, the city ​​and fortress of Casale withstood an attack by Austrian troops for a good 24 hours before the defenders had to surrender.

Towards the end of the 19th century, the city became known as the capitale del cemento (capital of cement ) because it was extracted from the surrounding hills. Cement is still an important industry today; there was also a large cement factory in the village , which was closed because of the severe environmental damage. The Buzzi Unicem company is based in Casale Monferrato.

In addition, the rice -Anbau and the cultivation of wine important economic factors. At Casale Monferrato, vines of the Barbera variety are grown for the Barbera d'Asti , a red wine with DOCG status. 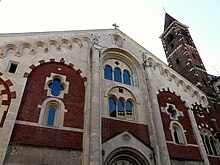 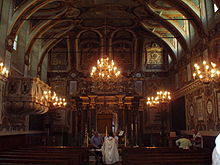 The A26 motorway leads past Casale Monferrato in a north-south direction , via which Vercelli in the north and Alessandria in the south and other motorways running there can be reached quickly. Various country roads connect Casale with the towns in the vicinity as well as with Turin and Milan . Casale is on the Mortara-Asti , Chiavasso-Casale Monferrato and Vercelli-Valenza railway lines . The city has a small airfield for general aviation . The nearest commercial airports are Turin , Milan-Malpensa and Genoa .

The city is rich in cultural features. The Romanesque cathedral Sant'Evasio, originally from 742, was completely rebuilt in the 12th century. In 1706 it was modified during a restoration, but returned to its medieval state in the 19th century. The church of San Domenico and some palaces should be mentioned as Renaissance buildings. The San Chiara Monastery in the center of the city houses pictures by Il Moncalvo .

The castle (castello dei Paleologi) was built as a military building from the 15th century with a hexagonal floor plan. The city's synagogue dates from 1595 and is considered one of the most beautiful in Europe.

In the 16th and 17th centuries, Casale was a center of Italian music. Many composers of the time worked in the place, among them Jean Mouton , Andreas de Silva and Giovanni Pierluigi da Palestrina . In the 17th and 18th centuries, opera premieres by Giulio Cesare Monteverdi , Pietro Alessandro Guglielmi and Pasquale Anfossi took place in Casale.

Casale is the setting for Umberto Eco's novel The Island of the previous day .

The city's football club, FBC Casale ASD , was founded in 1909 and won the Italian championship as AS Casale in 1913/14 . In 1934 he was relegated from Serie A and has not been top notch since. The Basketball Club Junior Libertas Pallacanestro played in the 2011-12 season for a season in the top Italian league, the Serie A .