The Castel del Monte (originally castrum Sancta Maria de Monte ) is a building from the time of the Hohenstaufen emperor Friedrich II in Apulia in southeastern Italy . The castle was built from 1240 to around 1250, but probably never completed. In particular, the interior work has apparently not been completed. 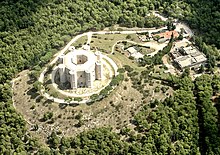 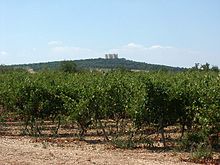 The Castel del Monte is located in the municipality of Andria , a town near Bari . Its floor plan is octagonal . At each of the corners there is a tower, also with an octagonal floor plan. The main octagon is 25 meters high, the towers 26 meters. The length of the sides of the main octagon is 16.50 meters, that of the towers each 3.10 meters. Six sides of the tower octagons are executed, two are omitted due to the connection with the main building. The main entrance faces east. The diameter of the inner courtyard, measured between opposite walls, is 17.63 to 17.86 meters. The deviations in the wall widths in the inner courtyard are remarkable, they are between 6.96 and 7.92 meters.

Interpretations of the function and form of the fort

Floor plan of the castle

The function of the castle has been puzzled over, and the octagonal floor plan inspired fantastic thoughts. The more objective interpretations range from a hunting lodge to a building for the safekeeping of the state treasure. The interpretation of the stone crown of Apulia (Willemsen), as which Castel del Monte was supposed to symbolize the power of Frederick II , was particularly popular in the 1930s to 1950s . The Castel del Monte is often referred to as the fortification and the favorite seat of Frederick II. The reason for the numerous assumptions is not least the sparse data situation. What is certain is that Frederick II, in a letter dated January 28, 1240, ordered Richard von Montefuscolo, Justitiar of the Capitanata, to make preparations for the construction of a castrum . The construction should take place at the church of Santa Maria del Monte. However, there are no facilities on the building such as trenches, arsenals, loopholes or crew quarters that suggest it was used as a fortress. Instead, the building was decorated with jewelry on the main portal and the windows, elaborate sanitary facilities and chimneys.

Irregularities in the dimensions - for example in the wall widths of the inner courtyard - have led to considerations as to whether these were deliberately planned to produce certain effects. The length of the shadow on the day of the autumn equinox corresponds to the width of the courtyard, a month later it corresponds to the sum of the width of the courtyard and hall, and a further month later it extends to the outer edge of the towers. 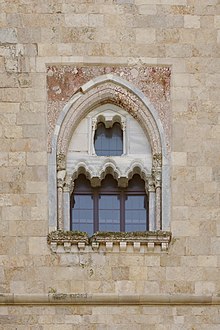 Cross ribs of the room ceilings

The building block of the wall jacket is light yellowish or gray-white limestone broken in the area. The material of the entrance portal and some selected structural elements is Breccia rossa (= red breccia ), a conglomerate rock , some of the columns in the interior are made of gray-orange marble. The original colored mosaic floor is only preserved in traces.

The rooms are arranged on two floors around an eight-sided inner courtyard. The outer corners of the octagon are in turn occupied by eight towers, each of which has two sides integrated into the wall so that six sides are exposed. Only three contain spiral staircases, the other five contain rooms for different purposes, u. a. Bathrooms and toilets, housed. Each room on the ground floor has a simple monoforium , and on the upper floor a Gothic-influenced biforium . The exception to this is the hall towards Andria , which has a triforium . The vaults are accentuated by strong cross ribs that run out on half-columns and at the intersection of which there is an ornate keystone in almost all rooms .

Outside staircase and entrance portal

The client paid particular attention to the entrance portal, as in his other buildings. The emperor's claim to power is conveyed to the visitor at the entrance: the sculptural emphasis on the portal, i.e. its pilaster frame , the architrave in between and the flat gable, allude to antiquity, the capitals are reminiscent of the Cistercian Gothic style and the flat rectangular surrounds of the upper portal area is influenced by Islamic architecture. The colorful splendor of the portal also seems almost oriental. The lions on the pillars belong to the Apulian Romanesque. All of this is brought into a new unit here in the portal architecture, just as Frederick II himself wanted to reunite the empire under his rule from the beginning.

There is a narrow slot in the masonry between the outer shell and the resulting inner portal zone. A portcullis used to be lowered here to keep unwanted visitors out. According to an older theory, such security measures against enemies also determined the structure of the passage system inside the castle. 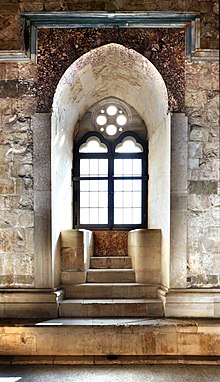 Castel del Monte is criss-crossed by an extremely sophisticated system of corridors. You couldn't get into every room from every entrance, two rooms can only be reached through a single entrance. So you can only get from the entrance room, where you have to pay admission today, to the room on the right (now a souvenir shop), and from there only to the inner courtyard. The latter portal, like all the others from Breccia rossa, is decorated on the inside, on the outside, towards the inner courtyard, but unadorned. In the case of the other two, differently designed portals to the inner courtyard, it is the other way round, the decorated side is on the outside. This means that the decorated side is always facing the visitor on the given path. The rooms without a portal only have unadorned monoforias or oculi . The two rooms, which have only one entrance, not only have a fireplace, but also sanitary facilities in the adjacent tower. In one of the two rooms there are small remains of a mosaic floor.

The upper floor is structured by pointed arches and pilasters . Three arched windows, also made of Breccia rossa, stand out here, only one of which is located above a portal on the ground floor. Since there was a surrounding wooden balcony on the upper floor, they probably also served as access to the balcony. The other rooms have only simple monoforias as windows. The walls are partially decorated with opus reticulatum , the marble panels were removed during the looting of the 18th century.

It used to be believed that the emperor had reason to be on the lookout for attacks and that he secured himself in his alleged "hunting lodge" by ensuring that everyone who wanted to visit him in his rooms could not help but one after the other Passing a set number of other rooms where one could examine him for weapons etc. De Tommasi points out, however, that the different rooms simply had different functions and that the aspect of social ranking played a role here and not the unproven hypothesis of a labyrinth to protect the emperor.

In the towers, the corridors turned into spiral staircases, carefully built of stone. In other palace complexes and also in the stair towers of the churches, wood was mostly used in such cases. At the top, the tower was closed with a small ribbed vault, the corbels of which were shaped like heads. It is a building that has been carefully thought out in every detail and, in some respects, is still a mystery today. 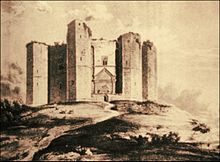 From 1522 to 1876 the castle belonged to the Carafa family , who were elevated to dukes of Andria and Castel del Monte in 1552. After centuries of relative oblivion, the cultural and architectural rediscovery of the fort began after it was first mentioned by Pacichelli (1690) with a first systematic description of the building by Troyli (1749). It was not until Henry Swinburne (1743–1803), who dealt with the mysterious building in his travelogues, that a broader interest sparked, which also marked the beginning of scientific work on and discussion of this building across Europe.

Two young German architects, Heinrich Wilhelm Schulz (1808–1855) from Dresden and Anton Hallmann (1812–1845) from Hanover, deserve the credit of having carried out the first architectural survey and historical documentation of the building in 1831. The aim of her work was "to take stock with measurements and building description as well as the historical location of the building by means of systematic document studies", the results of which were only published posthumously in 1860. Their reports, which Schulz and Hallmann presented in Rome in the winter of 1835/36, formed the basis and pointers for two French, the historian Huillard-Bréholles (1817–1871) and the architect Baltard (1805–1874), who were on the trail The two Germans were able to create their own documentation of the Castel with detailed plans of the building and publish it in Paris as early as 1844. Duke Honoré Théodoric d'Albert Duc de Luynes sponsored this project financially.

In 1876, after many decades of vacancy and looting, the Italian state acquired the Castel for 25,000 lire. Around 1900, restoration work began, which was carried out in the taste of the time: All damaged stones were replaced by replicas, the original state of construction was reproduced with modern materials, the interim history of the building was covered and whitewashed. In the end, the exterior of the Castel was "like new" again. The structure has been a national monument of Italy since 1936 . The order of the Ribbentrop Office and the German-Italian Society, Walther Wüster and others, can be seen as an example of the ideological reception of the Staufer Emperor Friedrich II and his buildings in Fascist Italy and National Socialist Germany , 1940 a model of Castel del Montes on a scale of 1 : 50 to be made, which was handed over to Adolf Hitler personally in Berlin at the turn of the year 1941.

At the beginning of the first restoration work (more followed in the 1970s and 1980s) - as older photographs show - there was still a cone of rubble over two meters high around the Castel. In order to expose the main access stairs, this pile of rubble was removed without any further structural investigation. This cone of rubble contained - as the files at the time indicate - many sculpted elements and broken wall blocks.

Modern surveys under Wulf Schirmer 1990–1996 created the basis for a factual study of the Castel del Monte structure.

Castel del Monte has been a UNESCO World Heritage Site since 1996 and has been depicted on the reverse of the Italian 1 cent coin since 2001 .

In the film The Name of the Rose , modeled on Castel del Monte, the mysterious aedificium , which contains the library around which the plot of Umberto Eco's novel revolves, was built at an even higher level .