The north facade of the palace

The baroque Royal Palace of Caserta (Italian Palazzo Reale di Caserta , also called Reggia di Caserta (German: Castle of Caserta )) in Caserta , Italy , about 40 kilometers north of Naples , is one of the largest castles in Europe.

The palace was built as the residence of the Bourbons for their rule over the kingdoms of Naples and Sicily . Construction began in 1751 under Charles III. (Spain) according to the plans of Luigi Vanvitelli and was essentially completed under Karl's son Ferdinand . The palace has been a UNESCO World Heritage Site since December 1997 .

As a result of the Vienna Preliminary Peace of 1735, the Spanish king's son Karl became King of Naples and Sicily . As Charles VII of Naples, he was the first ruler in 230 years to move his residence to the empire that had come to him and not to rule it from afar from his home country. 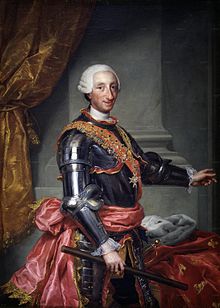 Under Charles, the arts began to develop in Naples, but the city did not seem representative enough as the capital. Like many princes of absolutism , he wanted a planned city as the new seat of government, which, following the example of Versailles, would become the center of politics, society and culture. The area for the new palace city was found north of Naples in what is now the province of Caserta : Karl acquired a correspondingly large property for his building project there in 1750 for the price of 489,343 ducats from Count Michelangelo Caetani di Sermoneta . However, it could also be possible that the property was confiscated because of an "offense against the Bourbons" committed by Gaetani. Luigi Vanvitelli, a student of Filippo Juvarra , who was actually in the service of the Pope in Loreto at the time with the restoration of the basilica there , was hired as the architect . After Vanvitelli presented his final design on November 22, 1751, Charles VII began building his new residence that same year. For the festive laying of the foundation stone on January 20, 1752, the monarch's birthday, two regiments and several squadrons of horsemen were set up in the form of the floor plan of the new palace.

Vanvitelli was supported by Marcello Fronton in the construction of the palace building . Francesco Collecini was responsible for the realization of a large aqueduct for the water supply, while Martin Biancour acted as head gardener for the extensive gardens and parks that were laid out from 1753. The main work was completed around 20 years after the laying of the foundation stone and amounted to 8,711,000 ducats. Vanvitelli's successor after his death on March 1, 1773 was his son Carlo. It would take almost 100 years for the palace to be fully completed.

Charles VII rarely visited the huge palace. Soon after the construction work began, it came into the possession of the Spanish crown in 1759 and was named Charles III. King of Spain. Since it was contractually regulated that he could not rule both kingdoms in personal union, he went back home and left the large construction site to his son Ferdinand, who continued his father's work.

During the Second World War, the capitulation of the German armed forces in Italy was signed on April 29, 1945 in the Castle of Caserta .

For the construction of the palace, Charles VII was inspired by the Palace of Versailles , but also by the Palacio Real of La Granja in his native Spain. At that time, the Versailles Palace served as an absolute model for castles all over Europe and was reflected in the mighty, uniformly structured facades of Caserta, while the echoes of La Granja - especially in the gardens - were intended to remind the king of his homeland. Karl himself made suggestions for the building project to the architect, but Vanvitelli did not take these into account in his designs.

Vanvitelli designed a gigantic building with a rectangular floor plan with sides of 247 and 184 meters, and a height of 38 meters. It is pierced in a cross shape by two inner wings, giving the palace four large inner courtyards. Some of its walls are over 5.5 meters thick.

Inside the castle there is space for more than 1200 rooms, and the facades are pierced by 1970 windows. The city and garden sides of the palace were emphasized with portals in the form of triumphal arches . An oval square was placed in front of the city side, which was to be framed by low side buildings. However, for cost reasons, these wings were only built halfway in length. Also for reasons of cost, one deviated from the original plan to emphasize the corner projections with tower-like structures and to erect a dome over the cross-shaped central building.

View through the stairwell

The room layout and furnishings have been changed several times over the last two centuries, but much of the furniture from the time it was built has been preserved and exhibited there. The rooms therefore reflect very well the taste of the respective era in which they were designed. The castle rooms now include the Museo Vanvitelliano , which documents the history of the castle through drawings, models and sketches by the architect, and the Pinakothek with an important collection of Bourbon portraits.

The chapel is very similar to the chapel of the Palace of Versailles . It has a rectangular floor plan measuring 36.5 by 11.7 meters and a barrel vault . The painting above the altar is by Giuseppe Bonito . Seven other paintings were on display there prior to World War II , but these were destroyed by bombing.

In order to be able to enter the royal apartments, the visitor must first cross three large halls , one behind the other . The first hall of the halberdiers measures 22.5 by 14.25 meters and has a ceiling fresco by Tommaso Bucciano . It is followed by the hall of the life guard with its vaulted ceiling decorated with stucco and arabesques . Behind it is the Alexander Hall , whose precious marble cladding comes partly from the Temple of Serapis in Pozzuoli . 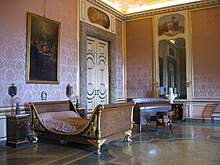 From the Alexander Hall , you will find the old apartment on the left , which owes its name to the fact that it was the first to be occupied. The sequence of rooms comprising eleven rooms includes, among other things, an oriental-style study, the queen's study with an associated, luxuriously equipped bathroom, and Ferdinand II's bedroom , in which Ferdinand II died in 1859.

The library laid out by Ferdinand's wife Maria Karolina also belongs to the old apartment . It contains over 12,000 books that are stored in three rooms. To enter it, you first have to cross two magnificently decorated reading rooms.

The library is followed by the Pinakothek. In its ten rooms, works by Italian and Dutch artists of the 18th century are shown. In addition, an iconographically important collection of paintings with works on the Bourbon dynasty is kept there. 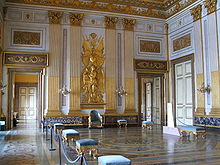 The 13 rooms of the New Apartment can be reached through a door in the west wall of the Alexander Hall . It is so named because it was completed in 1845 as the last part of the palace after 38 years of construction. In addition to three ceremonial halls, it also houses the king's private apartments.

Measuring 16.55 by 12.20 meters, the Mars Hall is designed in the Empire style. It got its name from the many depictions of Mars in the wall reliefs . In the enfilade system, the Astraea hall follows with a floor made of various types of marble. From there the visitor enters the throne room . The 36 by 13.50 meter room is adorned with numerous gold decorations and portraits of some of the kings of Naples . His ceiling fresco by Gennaro Maldarelli shows Charles III. at the laying of the foundation stone of the castle.

View from the hill of the park to the castle

Simultaneously with the Palace of the huge, well 100 was  hectare large castle park started. Unlike Versailles, Charles VII wanted a garden that would remind him of his homeland Spain, and so the mountainside in Caserta was integrated into the park over a large area, as Charles knew it on a smaller scale from the castle in La Granja. The baroque garden was conceived as a mountain park and has a central visual axis three kilometers long, which leads from the northern garden side of the castle onto the slope. It was equipped with water basins, fountains and cascades . The numerous waterfalls and cascades in particular not only had an aesthetic purpose, they also served to compensate for the slope of the ground.

The park's numerous fountains include the simple Margherita Fountain surrounded by busts and the Dolphin Fountain at the northern end of a 47.5 by 27 meter fish pond, also known as the dolphin waterfall . The fountain, built between 1776 and 1779 under Carlo Vanvitelli, got its name from three large dolphin statues erected on rocks, from whose mouths jets of water flow, which feed the adjacent fish pond. More wells are the Äolusbrunnen , are obtained from the original 54 statues still 23, and the 322 by 17 meters measured large Ceresbrunnen with seven small waterfalls and a large Ceres statue at its center, of nymphs , dragons, dolphins, Nereids and Tritons is surrounded. To the north of this is the Venus Fountain with 12 small waterfalls. The name results from a marble group that depicts the statue of Venus , surrounded by nymphs, dogs, boys and cupids , trying to dissuade Adonis from the hunt. The fountains arranged along the visual axis culminate in the Diana and Actaeon fountain with a large waterfall. 14 statues of hunters flank its sides. In the center of the fountain are two marble statues that together form the Diana and Actaeon group by Paolo Persico, Pietro Solari and Angelo Brunelli.

However, Caserta could not provide the amount of water necessary for the many wells and pools. To feed this, a 42-kilometer-long water pipe was necessary, the so-called Carolinian aqueduct ( Italian Acquedotto Carolino ), which collected water from the springs in the area and led it to Caserta. The building, also known as the Vanvitelli aqueduct, is expressly a UNESCO World Heritage Site.

The shepherd boy fountain in the English landscape garden

The lawns in front of the south façade of the palace were originally planned and laid out as broderie parterres , but their baroque design is only available in rudiments today.

The north-eastern area of ​​the park was expanded by an English landscape garden under Queen Maria Karolina . Begun in 1782 according to plans by Carlo Vanvitelli, there are artificial ruins as well as a chalet and the remains of a Roman temple. The garden still has exotic and rare plants such as camphor trees or Lebanon cedars and was the first place in Europe in 1880 where camellias from Japan were planted. The German-English gardener John Andrew Graefer was specially hired for the design and care of the valuable and rare plants .

The Palace of Caserta is subordinate to the Italian Ministry of Cultural Property . As a landmark of national interest, the palace is listed by the ministry as an “institution with special autonomy”. The national administration college Scuola Nazionale dell'Amministrazione (SNA) maintains a branch in one part of the building complex . In the south-western part of the park there is a technical school for the Italian Air Force .

The palace was the backdrop for various film productions. For example, parts of the film Star Wars: Episode I - The Phantom Menace were filmed in the castle's interiors , and part of the filming of the Illuminati film took place here in 2008 .