This article deals with the title of nobility - for other meanings see Graf (family name) and Graf (disambiguation) .

Crown of rank of a count: an attached decorative attachment as a helmet crown

Count , female countess , is a title of nobility . The Old High German forms Grafio and gravo probably date from the Middle Latin graffio from the Byzantine- Greek Grapheus " writer ". The Latin expression comes (French comte and comtesse , Italian conte and contessa ) was the name of a high-ranking imperial tax officer (comes largitionum) in the late Roman period . The nobility title "Graf" had a wide range, ranging from the rank of imperial prince to titular count ( letter nobility ).

The titles Landgrave , Margrave and some Count Palatine , derived from the Count, belonged to the prince class in the Holy Roman Empire and were above the count class in its order. In addition, there were increases in rank in the form of "Fürsteter Graf" (so-called Reichsgraf ).

Count as a title of nobility

Origins of the title of count

In the Merovingian and Franconian empires , a count was a royal official who exercised royal sovereignty in an administrative unit ( county , Gau ) and was the king / emperor's deputy in certain areas (march, royal castle, palatinate, royal estate). He came from the Frankish imperial nobility and was often represented in his county with his own property. The count was initially given military sovereignty and jurisdiction , later also financial and administrative sovereignty . The county constitution of the Franconian Empire was adopted by England ( county ), Spain and Hungary ( county ) in addition to its successor states Germany , France and Italy .

Right from the start there was a tendency towards heredity due to the frequent election of counts from the local nobility. A king had to put forward good reasons to prevent the son of a count from succeeding his father. Since the Ottonians , the meaning of the title of count changed from the original office to the term for the summarized rights of a nobleman in a certain area due to its increasing heredity and integration into the feudal system . The count's rights were treated more and more under private law through exchange, sale and inheritance divisions. As an outward sign of this development, the name of the county after the count's center of rulership instead of a Reichsgau became increasingly popular. The Salians tried to achieve the reorganization of the counties through their ministerial service nobility without lasting success. In the High Middle Ages, most of the counties, and with them their rights, came under the control of noble families or those who had emerged from ministeriality or of the already powerful dukes . The title of count was therefore largely no longer associated with an official county. However, it was preserved as a feature of a noble rank.

The German nobility was gradually divided into high and low nobility. Counts originally had the lowest rank among the high nobility , provided they ruled directly under the Empire; if (in modern times ) they were only awarded the title of count (without the imperial estate), they belonged to the lower nobility, which also applies to the so-called "imperial counts", whose (unofficial) "imperial title" only meant that they were given the title of count from " Reich ”, that is, was conferred by the emperor, who was the only source of“ counts ”in the empire until the early 18th century (with the exception of the Kingdom of Bohemia, whose king was identical to the emperor); The new Kingdom of Prussia began in 1701 with independent counts, the other imperial princes required imperial confirmation for counts to be raised until the fall of the Old Kingdom in 1806.

The wife of a count is "Countess", the descendants of counts are usually also counts. The unmarried daughter of a count is a countess, but has also been referred to as "Comtesse" (French: comtesse "Countess", German: Komtesse , also Komtess ) since the 17th century , which was no longer used in the 19th century. Counts were entitled to the salutation high-born , ruling and formerly ruling, i.e. noble counts, the salutation exalted (see under noble houses in the genealogical handbook of the nobility ) or the second division of the high nobility .

There was also the primogenous title of count, which was only given to the Fideikommissherrn , i.e. usually the owner of the Fideikommiss property, and after his death to the eldest son and heir, but not to the other members of a noble family. His descendants were (with the exception of the heir after the commencement of the succession) either barons or barons or, more simply, from nobles.

In 1919 the nobility and their privileges were legally abolished in Germany and Austria. While the use of the former nobility titles was banned in Austria, the former nobility titles in Germany were made into mere parts of the surname, without being titles. In Germany, since 1919, the spelling has been based on the first name and then the former title of nobility as part of the surname. In contrast, before 1919 the title of nobility was placed before the first name (in Austria, however, it was customary until 1919 to insert the title of nobility between the first and last name). According to common usage, the oral salutation is Count / Countess So-and-so (omitting the “from”), while z. B. When addressing letters in private correspondence, instead of "Mr. Woldemar Graf von XY", the following is sometimes written: "SH Graf Woldemar von XY".

Graf as a non-civil official title 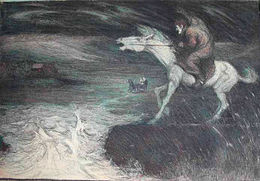 The dikemaster on his horse: Hauke ​​Haien is the title character from Theodor Storm's novella Der Schimmelreiter

Some non-aristocratic officials are also traditionally referred to as counts .