As Old High German or Old High German (abbreviated Ahd. ) Is the oldest written form of German that has been used between 750 and 1050. Your previous language level , Pre-Old High German , is only documented by a few runic inscriptions and proper names in Latin texts.

The word “German” appears for the first time in a document from the year 786 in the Middle Latin form theodiscus . In a church assembly in England the resolutions “ tam latine quam theodisce ” were read out, that is “both Latin and in the vernacular” (this vernacular was, of course, Old English ). The Old High German form of the word is only documented much later: In the copy of an ancient language textbook in Latin, probably made in the second quarter of the 9th century, there was an entry of a monk who apparently did not use the Latin word galeola (crockery in the shape of a helmet) understood. He must have asked a confrere the meaning of this word and added the meaning in the language of the people. For his note he used the Old High German early form " diutisce gellit " ("in German 'bowl'").

Old High German is not a uniform language, as the term suggests, but the name for a group of West Germanic languages that were spoken south of the so-called " Benrath Line " (which today runs from Düsseldorf - Benrath approximately in a west-east direction). These dialects differ from the other West Germanic languages ​​by the implementation of the second (or standard German) sound shift . The dialects north of the “Benrath Line”, that is, in the area of ​​the north German lowlands and in the area of ​​today's Netherlands , did not carry out the second sound shift. To distinguish them from Old High German, these dialects are grouped under the name Old Saxon (also: Old Low German ). Middle and New Low German developed from Old Saxon . However, the Old Low Franconian , from which today's Dutch later emerged, did not take part in the second sound shift, which means that this part of Franconian does not belong to Old High German.

Since Old High German was a group of closely related dialects and there was no uniform written language in the early Middle Ages , the text that has been handed down can be assigned to the individual Old High German languages, so that one often speaks more appropriately of (Old) South Rhine Franconian , Old Bavarian , Old Alemannic , etc. These West Germanic varieties with the second sound shift, however, show a different proximity to one another, which is the reason for the later differences between Upper , Middle and Low German . For example, Stefan Sonderegger writes that with regard to the spatial-linguistic-geographical structure, Old High German should be understood as follows:

"The oldest stages of the Middle and High Franconian, d. H. West Central German dialects one hand and the Alemannic and Bavarian, ie Upper German dialects on the other, and. in time ahd the first time tangible, but at the same time already dying language level of Lombard in northern Italy . The Ahd remains clearly separated. from the Old Saxon in the subsequent north, while a staggered transition can be determined to the Old Dutch-Old Lower Franconian and West Franconian in the northwest and west . " 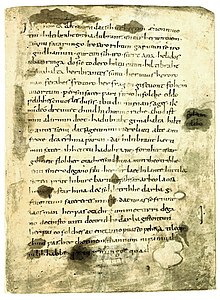 Part of the Hildebrandslied , written in Old High German

The Latin alphabet was adopted in Old High German for the German language. On the one hand, there were surpluses of graphemes such as <v> and <f> and, on the other hand, “uncovered” German phonemes such as diphthongs , affricates (such as / pf /, / ts /, / tʃ /), and consonants such as / ç / < ch> and / ʃ / <sch>, which did not exist in Latin. In Old High German, the grapheme <f> was mainly used for the phoneme / f /, so that here it is fihu (cattle), filu (a lot), fior (four), firwizan (to refer) and folch (people), while in Middle High German The grapheme <v> was predominantly used for the same phoneme, but here it is called vinsternis (darkness), vrouwe (woman), vriunt (friend) and vinden (to find). These uncertainties, which still affect spellings like "Vogel" or "Vogt", can be traced back to the grapheme excesses described in Latin.

The oldest surviving Old High German text is the Abrogans , a Latin-Old High German glossary. In general, the Old High German tradition consists largely of spiritual texts ( prayers , baptismal vows, Bible translation ); only a few secular poems ( Hildebrandslied , Ludwigslied ) or other language certificates (inscriptions, magic spells ) are found. The Würzburg mark description or the Strasbourg oath of 842 belong to public law, but these are only passed down in the form of a copy by a Romance-speaking copyist from the 10th and 11th centuries.

In connection with the political situation, the written form in general and the production of German-language texts in particular decreased in the 10th century; a renewed use of German-language writing and literature can be observed from around 1050. Since the written tradition of the 11th century differs significantly from the older tradition in phonetic terms, the language is called Middle High German from around 1050 onwards . Notker's death in St. Gallen 1022 is often defined as the end point of Old High German text production .

Characteristics of language and grammar

The Old High German primary umlaut is typical of Old High German and important for the understanding of certain forms in later language levels of German (such as the weak verbs that are written back ) . The sounds / i / and / j / in the following syllable cause / a / to be changed to / e /.

Characteristic of the Old High German language are the endings, which are still full of vowels (see Latin ).

The weakening of the final syllables in Middle High German from 1050 is the main criterion for the delimitation of the two language levels.

The noun has four cases (nominative, genitive, dative, accusative) and remnants of a fifth ( instrumental ) are still present. A distinction is made between a strong (vowelic) and a weak (consonantic) declination .

Nominative and accusative are quite arbitrary in the plural and differ from dialect to dialect, so that an explicit separation of which of these forms expressly describes the accusative and which the nominative is not possible. In addition, on the basis of this list, one can already see a slow collapse of the various forms. While there are still many quite irregular forms in the nominative and accusative plural, the dative and genitive, both in the singular and in the plural, are relatively regular.

A distinction is also made between strong (vowel) and weak conjugation in verbs. The number of weak verbs was always higher than that of strong verbs, but the second group was significantly more extensive in Old High German than it is today. In addition to these two groups, there are the past tense , verbs that have a present tense meaning with their original past tense form.

In the case of strong verbs, in Old High German there is a change in the vowel in the basic morphem , which carries the lexical meaning of the word. The inflection (inflection) of the words is indicated by inflectional morphemes (endings). There are seven different ablaut series in Old High German, the seventh not being based on an ablaut , but rather on reduplication .

The weak verbs of Old High German can be morphologically and semantically divided into three groups via their endings:

Verbs with the ending -jan- with a causative meaning (to do something, to bring about) are elementary for understanding the weak verbs with back umlaut that are very common in Middle High German and are still partially present today , as the / j / in the ending is the primary umlaut described above effected in the present tense.

The Old High German verb sīn ' to be' is referred to as the verb noun substantivum because it can stand on its own and describes the existence of something. It is one of the root verbs that have no connecting vowel between stem and inflection morphemes. These verbs are also known as athematic (without connective or subject vowels). The special thing about sīn is that its paradigm is suppletive, i.e. is formed from different verb stems ( idg. * H₁es- 'exist', * bʰueh₂- 'grow, flourish' and * h₂ues- 'linger, live, stay overnight'). In the present subjunctive there is still the sīn, which goes back to * h₁es- (the indicative forms starting with b , on the other hand, go back to * bʰueh₂- ), but in the past tense it is given by the strong verb wesan (nhd. Was , would ; see also nhd. Essence ), which is formed after the fifth ablaut row.

In Germanic there were only two tenses: the past tense for the past and the present tense for the non-past (present, future). With the onset of writing and translations from Latin into German, the development of German equivalents for Latin tenses such as perfect , past perfect , future I and future II in Old High German began. At least approaches to having and being perfect can already be made out in Old High German. The development was continued in Middle High German .