The Middle Low German language is a developmental stage of Low German . It developed from the Old Saxon language in the Middle Ages and has been documented in writing since around 1225/34 ( Sachsenspiegel ).

A Middle Low German inscription on a half-timbered house in Hameln : "All the warlde herlicheyt is alse ene blome de huete wasset un tomorrow vorgheit. The word of the Lord blifts yn ewicheit" - All the world's glory is like a flower that grows today and goes away tomorrow. The word of the Lord remains forever. (Cf. 1 Petr 1,24-25  EU ) 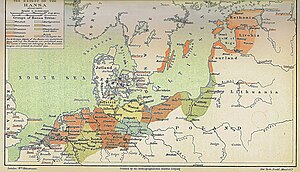 The Hanseatic League around 1400

The Middle Low German language was the leading written language in northern Central Europe during the Hanseatic period from around 1300 to around 1600 AD and served as the lingua franca in the northern half of Europe. It was used in parallel to Latin for diplomacy and documents . Most of the Hanseatic League's correspondence in Central and Northern Europe was carried out in Central Low German. There are Middle Low German documents from London in the west to Novgorod in the east and Bergen in the north to Westphalia in the south. Middle Low German was also communicated in Visby on Gotland, Riga , Reval and Dorpat . There is still a handwritten dictionary of Middle Low German-Russian by Tönnies Fonne from 1607 in the Danish Royal Library in Copenhagen. During this period in particular, Low German had a considerable influence on the Scandinavian languages Norwegian , Danish and Swedish , which is characterized by numerous loan words. Some Scandinavians believe that around half or even more of the Swedish vocabulary goes back to Low German. It should be noted, however, that these are less the most common words (pronouns, conjunctions, prepositions, etc.) and more rather rare nouns (job titles, etc.).

Regional expressions of the written language

In the 15th and early 16th centuries, through the Devotio moderna, Eastern Middle Dutch exerted an influence on the Münsterland written Middle Low German.

Some linguists assume that southern Ostfälisch influenced the rest of the Ostfalen with written language influences . Southern Ostfalen is considered to be the strongest intellectual center of early Middle Low German.

This article or section needs to be revised: grammar is missing, cf. z. B. with Middle High German # grammar , Gothic language # grammar
Please help to improve it and then remove this marking. 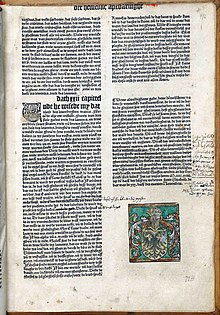