The identifiers defined in the standard are used, among other things, in lexicography , linguistics , in libraries, information services and in data exchange. They are used to clearly indicate languages ​​and their identification in documents. They were not introduced as abbreviations because, among other things, there is not always a similarity with the designated language.

The code is defined in lower case. This clearly differentiates between the language code (lower case) and the country codes according to the ISO 3166 standard (upper case).

The language codes in this standard include natural languages and planned languages , but not languages ​​created for machine processing such as: B. Programming languages .

The officially introduced sub-standards are:

*)With Bihari (bh), ISO 639-1 includes a collective language code for a language group.

Part 1 of the standard was created for use in terminology , lexicography and linguistics . Until it was officially adopted in 2002, it was operated under the name ISO 639. Precursors are the Requests for Comments (RFCs) RFC 1766 (March 1995) and RFC 3066 (January 2001). ISO 639-1 is not only intended to cover the languages ​​most widely used in literature, but also to include the most “developed” languages ​​with a “specialized” vocabulary. Not only individual languages but also language families are included. Each language is represented by a two-letter identifier ( alpha-2 code ). For example stands defor the German language or frfor the French language . Altogether, different identifiers are possible by using the 26 Latin letters , of which 209 are occupied (as of March 2014). The standard is administered by the International Information Center for Terminology (Infoterm) founded by UNESCO .

The inclusion of further language codes is planned, but only for identifiers that are added to the ISO 639-2 standard at the same time. Two-letter identifiers are no longer assigned to existing entries in ISO 639-2. This is to ensure compatibility.

The later standard ISO 639-2 expands ISO 639-1 by a larger number of languages . Every language code defined in ISO 639-1 can also be found in this standard with a three-letter code ( Alpha-3 code ).

For the second ISO 639 standard, the identifier was expanded to three letters so that theoretically language codes are possible. So far, 506 (as of March 2014) identifiers for individual languages and language families have been included (including the languages ​​according to ISO 639-1). The aim of the standard is to use “terminology and bibliography” in order to meet the needs of libraries and to enable the broadest possible labeling of works from around the world. Languages ​​were included for which a suitable amount of literature had been published. Since the focus is on the written language, a distinction was not made between languages ​​which, although they have great similarities in their written form, differ in their spoken form. For example, there is no distinction between the Chinese languages ​​such as standard Chinese and Cantonese .

The US Library of Congress takes care of this sub-standard and publishes the current code list.

The ISO 639-2 standard extends ISO 639-1 and includes all language codes there. The two-letter identifiers are continued with three letters in this standard, whereby for the most part only one additional letter is added and a similarity is guaranteed (see below for the special case of the identifiers ISO 639-2 / B). The basis for the language codes of this standard was the MARC Code List for Languages , which has been in use since 1968 and also administered by the Library of Congress.

The standard does not provide a description for the assignment of individual languages ​​(without their own entry) to one of the collective language codes offered by ISO 639-2. The Library of Congress , however, refers to the above-mentioned list of the MARC Code List for Languages that can fulfill this function.

Another difference to ISO 639-1 and the other sub-standards is the use of terminology (English terminology code ) and bibliographic codes (English bibliographic code ), which are referred to as ISO 639-2 / T and ISO 639-2 / B. This distinction is made for 22 entries and is largely due to the fact that before the standard was used, there were already conventions in the library system for three-letter identifiers, which differed greatly from the naming of the standard ISO 639-1 for two letters. The German language is one of these cases, their B code is spacious , the T-Code eng .

As a continuation of ISO 639-1 was aimed for in the naming, it was decided to introduce two codes in cases of different identifiers. The terminological identifier continues the designation according to ISO 639-1, while the bibliographic identifier is used for reasons of compatibility and reflects the previous, extensive designation. The standard allows the mixture of T and B codes not and called for a definition of the kind used before the data exchange by the parties concerned of.

It is possible to add and change language codes as well as to change their description, while ensuring stability in the standard described. Language codes according to ISO 639-2 / B, which are only intended to ensure compatibility, are excluded from changes. A code abandoned after changes should be reused after five years at the earliest.

The ISO 639-3 standard was published on February 5, 2007 and, based on the first two sub-standards, is intended to provide comprehensive coverage of all languages ​​in the world. The three-letter identifiers from the previous ISO 639-2 standard are continued and thus ISO 639-3 can theoretically also have 17,576 different identifiers (practically limited, among other things, by the fact that ISO 639-5 also includes alpha-3 codes that disjoint (foreign to the element) to those from ISO 639-3). All known languages ​​are recorded, including all living, extinct, historical and constructed languages. More than 6,900 languages ​​have been included in the standard so far. The complete list is intended primarily for use in information technology , where a complete listing of all languages ​​is desirable. This also includes entries for the Swiss-German dialects ( gsw , German SWiss), Kölsch ( ksh ) and the Bavarian dialects ( bar ).

It is managed by the organization SIL International , which uses the Ethnologue to record living languages ​​(with exceptions) and language codes. In the 15th edition of the Ethnologue, the codes previously assigned by SIL were adapted to those of ISO 639-2 in order to enable conformity. Other historical and artificial languages ​​are from Linguist List .

In contrast to languages ​​that are represented by collective language codes, macro languages ​​are intended to summarize individual languages ​​if, from certain points of view, it appears necessary to consider these languages ​​as a single one. The registration authority gives examples of this:

Macro-languages ​​can, as a concept, bring together the various approaches of the sub-norms -2 and -3. A single entry from ISO 639-2, which subsumes several entries from ISO 639-3, is inserted into the structure of the third sub-standard. Every macro language code has an equivalent in ISO 639-2 with the exception of the Serbo-Croatian language (as of August 2007), which originally had an entry in ISO 639-1 that is now obsolete.

When summarizing in macro languages, as with the Malay language , name conflicts can arise. While the code mlydenotes the individual language, msaMalay stands for the entry as a macro language . In order to avoid confusion, the names of these entries are given a qualifying addition in the list of identifiers.

An explanation of the application of the standards from ISO 639 can be found in the ISO 639-4 standard. This standard itself does not define any language codes. The publication took place in July 2010.

This sub-standard offers a hierarchy of language families and allows the codes from sub-standards 1–3 to be structured. This enables a different gradation in the generalization for marking speech data.

Integration and relationships of the individual norms

The language codes defined in the various sub-standards interact and allow labeling with different granularity. This integration will only be completed with the publication of the ISO 639-4 and ISO 639-6 standards. 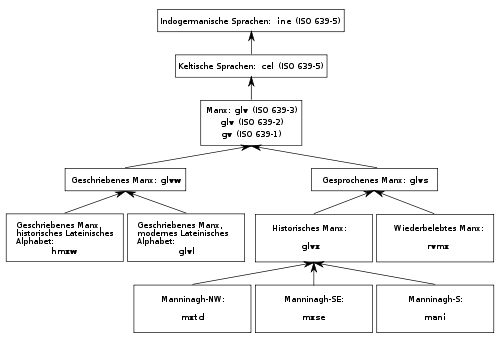 Representation of the integration of the individual language codes from the various sub-standards using the example of Manx . The alpha-4 codes are from the draft ISO 639-6 and are subject to change prior to publication.

The standards of the ISO 639 series are related to one another in different ways. ISO 639-3 defines the set of all individual languages ​​(supplemented by the macro codes), while Part 5 defines a hierarchy of language families. These clearly delimited sets can be found in part in the two older sub-norms -1 and -2 and their elements are juxtaposed there in an unstructured manner. ISO 639-1 is a subset of Part 2, since there are stronger criteria for inclusion than two-letter codes.

Representation of the quantity relationships defined by the sub-standards.

The management of the identification lists is carried out by selected registration authorities, whose task is to accept and review requests for the inclusion of new identifications and changes to existing entries. The registry for ISO 693-1 is Infoterm , for ISO 639-2 the Library of Congress and ISO 639-3 is administered by SIL International .

The naming of the identifiers should, if possible, follow the national language name of the coded language. Exceptions may be made if countries in which the language concerned is spoken wish to use a different name.

The two standards ISO 639-2 and ISO 639-3 have special identifiers to enable flexible handling of the identification of texts, including mis(from English missing code for "missing code") for languages ​​to which no code has yet been assigned .

The IDs from qaato qtz(including the alphabetic IDs in between) are registered for local use and are not assigned by the registration authority.

Designation of the language according to RFC 5646

A combination of the language codes of the ISO 639 standard with other standards for identifying languages ​​and scripts is given by Request for Comments 5646 ( RFC 5646 ). There the interaction of language codes (ISO 639), geographic codes ( ISO 3166-1 ) and script codes ( ISO 15924 ) is described.

The ISO 3166-1 standard identifies geographical entities and can thus be used to designate languages ​​and dialects of a specific region. Like ISO 639-1, ISO 3166-1 also uses two-letter abbreviations. It is recommended there to display geographic codes in capital letters. Language and region codes overlap, so designated deaccording to ISO 639-1 the German language and DEaccording to ISO 3166-1 the country Germany, frthe French language and FRanalogously the territory of the state France . However, the same codes in the various standards can also mark different terms, such as BEfor Belgium and befor the Belarusian language (“Belarusian”), EUfor the European Union and, euon the other hand, for the Basque language (“Euskara”). In practice, however, these overlaps do not play a role, as the language code always comes first, before the hyphen.

An example of a code according to RFC 5646 is fr-Latn-CAfor French according to the Latin alphabet as it is written in Canada .

Examples of the language codes according to ISO 639

This table shows (sorted by language code) the various language entries and shows the relationships between the sub-standards of ISO 639. Living, historical and artificial languages ​​are listed. Some identifiers do not exist in the other standards, or they exist in a different form.