Upper Sorbian is one of the officially recognized minority languages ​​in Germany according to the European Charter for Regional or Minority Languages. In the official settlement area in Upper Lusatia there are, among other things, bilingual road and place signs and state schools with Upper Sorbian as the language of instruction or Sorbian as a foreign language.

A uniform Upper Sorbian written language has only existed since the 19th century. Before that, there was a Catholic and a Protestant variant, some of which differed in spelling, grammar and vocabulary and had been coined and coded by clergy. In terms of spelling, the Catholic variant was more based on Czech , the Protestant variant more on German . With the so-called "Sorbian rebirth" under the leadership of the Maćica Serbska , the two written languages ​​became a single, non-denominational one. Important pioneers for this process were a. Jan Arnošt Smoler , Michał Hórnik and Handrij Zejler .

For the linguistic conditions of the present see the article Sorbian language .

The consonantic phonemes of Upper Sorbian are as follows: 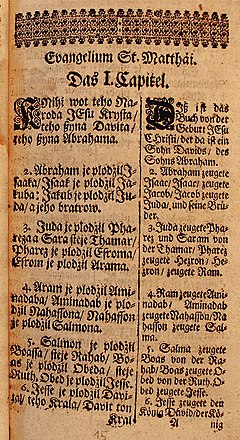 In Upper Sorbian both final hardening and regressive assimilation of the phonation occur:

The vowel phonemes are as follows:

The vowels on the left of the dots are not rounded ( spread ), those on the right are rounded . 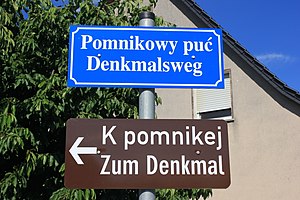 In alphabetical sorting , no distinction is made between the letters n and ń and between o and ó . For example, nósk (= nose ) is sorted before nosorohač (= rhinoceros). If two words differ only in these letters, the alphabetical order is also taken into account here, for example with won (= out, out) - wón (= he) - wóń (= scent).

Ě, Ń, Ó and Ř never appear at the beginning of a word, which is why the corresponding capital letters are very rare and are only used when the whole word is written in capital letters (e.g. RÓŽEŃ (= (grill) grate; skewer) ). 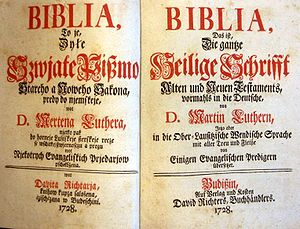 Upper Sorbian is an inflectional language , which means that the declination and conjugation are made using endings and often small changes in the stem. There are multiple declensions and multiple conjugations as well as numerous irregularities. The word order is relatively free and allows stylistic differentiations.

In addition to the categories number and gender, the nouns have the category case with the seven cases nominative , genitive , dative , accusative , instrumental , locative and vocative , whereby the vocative in colloquial language only occurs in the singular of the masculine animate nouns .

The grammatical gender of the nouns can usually be recognized by the word ending. Male nouns usually end with a consonant, feminine nouns with -a and neuter nouns with -o or -e. An article is usually not needed.

In the singular, the nouns are regularly formed as follows:

The vocative as a case of addressing and calling has different forms from the nominative only in the singular masculine nouns, but mostly differs in terms of intonation .

In Upper Sorbian, as in most Slavic languages, the principle of congruence applies to adjectives, i.e. the formal agreement with the determined noun, e.g. B. rjana kniha ("beautiful book"), rjany štom ("beautiful tree") and rjane wokno ("beautiful window").

In addition to the categories number and gender, the verb has the categories of aspect (perfect and imperfect) and tense (present, future, past tense), person and mode (imperative, conditional). The aspects are expressed partly by different inflection suffixes, partly by prefixes (usually perfecting imperfective verbs), in a few cases also by two different stems.

Map of the Sorbian dialects

The Sorbian-speaking area in Upper Lusatia is historically divided into several dialect zones. The various dialects differ mainly in pronunciation, but to a lesser extent in vocabulary and grammar.

The most lively Sorbian dialect to this day is the Catholic variant of Upper Sorbian, which is spoken in the villages on Klosterwasser . A characteristic feature is the realization of the written y as ó (dark o). Further north are u. a. the dialect areas of Nochten / Wochozy , Hoyerswerda / Wojerecy and Runde / Slepo , which are referred to as border dialects and are more closely related to Lower Sorbian. In the villages around Bautzen and in the city itself, the so-called (Protestant) Bautzner dialect is spoken, which formed the most important basis for the Upper Sorbian written language and therefore does not differ significantly from today's standard language.

The Muskau dialect , the Löbauer dialect and the so-called mountain dialect formerly spoken in and around Großpostwitz / Budestecy are considered to have died out in the 20th century . The few speakers remaining in these regions now use the Upper Sorbian standard language.

That variant of German that is spoken today in the linguistically assimilated villages of the Sorbian settlement area is known as Neulausitzisch .