The title of this article is ambiguous. Further meanings are listed under Z (definition of terms ) .
Currently 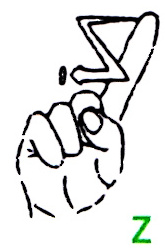 The letter Z in the finger alphabet

The finger alphabet for the deaf or hard of hearing represents the letter Z with the closed hand pointing away from the body while the index finger points upwards and writes a 'Z' in the air in the form of a zigzag movement .

In the Greek alphabet , the letter was adopted as zeta . For the Greeks, the zeta stood for the sound value [z] and for the affricate [dz]. In various dialects, the zeta was also pronounced as a voiced or voiceless dental fricative [ð] or [θ] (like the English th: th in [θɪn], "thin"; th is [ðɪs], "dies"). At the beginning, the zeta still had the form of the zajin, similar to the I. Until the classical period, however, the longitudinal bar tilted to the right, probably because it was so quick to write, possibly also because of the similarity to the iota .

The Etruscans adopted the zeta in the form similar to the I in their alphabet. However, since Etruscan had no voiced plosives, [dz] became [ts]. This letter was also adopted by the Romans. However, the affricate [ts] did not exist in Latin and so it was used in the 5th century BC. Chr. By the (from the letter, the I-shaped Z in the alphabet C newly created) G with the phonetic value [g] replaced.

The Greek Zeta was included in the Latin alphabet by the Romans together with the Ypsilon in the first century in order to be able to correctly reproduce the Greek words and proper names. Hence their place at the end of the alphabet. Marcianus Capella reports that the revolutionary statesman Appius Claudius Caecus rejected the Z: "Z idcirco Appius Claudius detestatur, quod dentes mortui, dum exprimitur, imitatur." The dead man's wide open mouth corresponds to the position of the teeth when pronouncing the Z. Um in the picture to stay: Life begins with the amazed "A" and ends with the "Z". A to Z.

The Z with underslung

Berlin street signs with "z with sub-sling" in Latin sans serif in Eszett ( ß ) and the ligature tz.

A graphic variant is the “Z with sub-slings” or “tailed Z”, which also appears in Latin cursive scripts based on the broken scripts (such as Fraktur ). In some Latin antiqua and sans serif fonts, this variant can be found as a single letter similar to “ʒ” and in ligatures (e.g. “ſʒ” to “ß”).

The Latin letter Ezh ( Untersch ), as it is used in the International Phonetic Alphabet as a symbol for the voiced postalveolar fricative , is a graphic variant of the Z with an underling .

Another graphic variant is the ȥ (Z with hook), a graph which is intended in the standard transcription of Middle High German for the Middle High German coronal fricative , in contrast to the affricate designated with Z (Z without hook) .

Development of the German z

Until the Middle High German period, the sound that emerged from the second sound shift from a short t was written with z or zz: Middle High German daz, ez, ezzen as opposed to Low German dat, et, eten. This sound was probably a voiceless alveolar fricative pronounced [s] as our current unvoiced s and remained for a long time from the old Germanic s different, that as alveolopalataler unvoiced fricative [⁠ ɕ ⁠] was pronounced. From very early on, instead of zz also sz writing to make it better from tz to distinguish. This is how the German ß came about . In the twelfth century the z / zz sound coincided with the old s / ss sound. As a result, the two spellings were soon mixed up and, after many centuries, the current distribution of the letters ß, ss, s emerged.

Long tt and t the word or syllable beginning were, however, a ts-sound, the [⁠ TS ⁠] in the phonetic alphabet , which is pronounced to this day as such. B. in numbers , sitting in contrast to Low German Tahl , morals .

Comparison with other European languages

In many languages, the pronunciation of "z" is different from the German Zett and corresponds to the voiced S , which in the IPA phonetic alphabet as [⁠ for ⁠] is displayed. Some examples are English zoo , zero or French zéro , Émile Zola . This also applies to the Slavic languages ​​with the Latin alphabet. For the Greek, see the examples at Zeta .