This article deals primarily with the origin, representation and pronunciation of the letter P. The different meanings of this character can be found under P (disambiguation) . For technical reasons, #P also forwards here; for the complexity class see therefore Sharp-P . 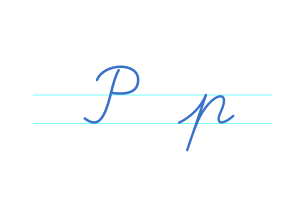 uppercase and lowercase P in the Latin original font 1953
Pp

p is a hard stop and also stands for the voiceless bilabial plosive in the International Phonetic Alphabet (IPA) . At the end of the word, in the standard pronunciation of b, final hardening occurs - Examples: rubbed [ˈʁiːp]; Sieve [ziːp]; stayed [bliːp]. The corresponding fortis is the P. Together with an h it is pronounced as “ph” like an f .

When spelling and in abbreviations it is spoken together with an “e” as “pe” or - in echoes of the Greek alphabet and for a clear acoustic differentiation from the letter “b” - with an “i” as “pi”. In the spelling alphabet it says "Paula" or "Petra", or in the international spelling alphabet ( ICAO , NATO and USA) "Papa".

The early form of the letter P in Protosinaitic script is possibly the symbol for a throwing stick . However, this exit symbol is only partially accepted in the literature; some sources do not give an exit symbol. What is certain is that there is a letter in the Phoenician alphabet called Pe (mouth), which is similar to the throwing stick of the Protosinaitic script and has the shape of a loop open to the left. The phonetic value of the Pe among the Phoenicians was [p].

The Greeks took over the letter with this sound value and gave it the name Pi . At the beginning, the Pi was still similar to the Pe, but became increasingly geometrical as the writing tools were changed. The originally different length vertical lines of the pi were brought to the same length until the classical Greek alphabet. In addition to aesthetic reasons, this could also have been caused by the possibility of confusion with the gamma .

The early Greek form of the pi was adopted into the Etruscan alphabet. Unlike the Greeks, the approach was not lengthened, but rounded off. The Etruscan form of the P was adopted in the Latin alphabet, but it was mirrored when the writing direction changed from right-to-left to left-to-right. As a further modification, the rounded part was connected to the letter approach.

According to DIN 55301 (design of statistical tables), the minuscule p ( English p for p reliminary ), which is placed after a value (number) in a table compartment, stands for "preliminary number" as a value-supplementing character, also quality indicators (in contrast to value-substituting characters). This is exactly how the symbol is used in tables of official statistics .

The finger alphabet for the deaf or hard of hearing represents the letter P with the palm facing down, the index finger pointing forward and the middle finger and thumb forming a circle. The remaining fingers are on the palm.

This flag P in the flag alphabet (also known as Blue Peter ) is set to indicate that a ship is about to leave the port within the next 24 hours. It is a sign for the crew on shore leave to come aboard and that local suppliers should present outstanding invoices. At sea, on the other hand , the P flag means : "My nets have got stuck in an obstacle".

"P the german writers hark the plaser, even has a little underschaid of b, one is taken for the other." "[...] the b and p is made with the life, torn open by the force of the breath that one holds the breath mouths with closed mouth, which he pushes open in his cheeks like a whistler, and then lets the breath faren through open life; the p is herter. ”Quotes from the Grimm dictionary