The Hebrew Alphabet ( Hebrew אָלֶף־בֵּית עִבְרִי alef-bet Ivri ) is composed of 22 letters existing alphabet of the ancient and modern Hebrew and the biblical and Talmudic Aramaic . In addition, other Jewish languages or forms of language were and are sometimes written with it, for example Yiddish and Ladino . 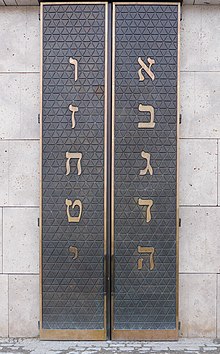 The first ten Hebrew letters Aleph to Jod stand as numerical values ​​for the Decalogue , here from top to bottom and from right to left on the doors of the main synagogue Ohel Jaʿakov , Munich (see also Abecedarium )

This section needs to be revised: For "German translation": "According to the Hebrew naming convention of the German-language Wikipedia." - that is more like TF and this naming convention only refers to "modern Hebrew (Ivrit)".
Please help to improve it , and then remove this flag.

The Hebrew language was originally written using the ancient Hebrew script , which is very similar to the Phoenician script (example:ב, a house symbol rotated by 90 °:,

From the fifth to fourth centuries BC Chr. Were with the rise of the Persian Empire and after the Babylonian exile Imperial Aramaic , the language of administration and the letterforms of the Aramaic alphabet to commonly used font for Aramaic and other languages. The use of ancient Hebrew characters was slowly being replaced.

In the Dead Sea Scrolls , the ancient Hebrew script is still occasionally used to denote the name of God, and coins from the revolt of Bar Kochba still have such characters.

The ancient Hebrew script was finally declared unusable for sacred texts by the rabbis in the 2nd century AD . In their place they established the Hebrew book script or square script, which is customary in Hebrew to this day, developed from the Jewish- Aramaic style , as the only canonical script . The Samaritan Pentateuch is still written in a further development of the ancient Hebrew script.

In addition, there are a number of epoch-dependent regional cursive scripts, which reproduce the square script with handwritten sweep, and a modern italic script , which developed in the German-Ashkenazi area in the 19th century.

The Hebrew script is left-handed , it is written and read in the primary direction from right to left, and secondarily from top to bottom. There is no difference between upper and lower case , but five of the letters at the end of a word are given a special final form, which appears in the table to the right of the standard form.

All letters are originally pure consonants , but four of them are used in addition to their consonantic meaning to represent vowels , especially long vowels , as so-called matres lectionis (mothers of reading) . This is how the two vowels become in the wordתורה "Torah" (instruction) written as consonants Waw and He: ת Taw - ו Waw - ר Resch - ה Hey However, not all vowels are written like this, especially short vowels mostly remain unmarked. In biblical texts, spellings with ( plene spelling ) and without matres lectionis (defective spelling) occur for the same word . Only when spelling Yiddish is the Hebrew script no longer a consonant script, in this case all vowels are written as letters: e asע Ajin, a and o as א Alef, as well as i, u, ei and oi with the help of י Iodine and ו Waw.

In the 2nd century BC Chr. Old numerals were replaced by numerical values ​​assigned to letters , which are marked as numbers with two slashes (called Geresch and Gerschajim ) between the last two digits. In sacred texts, numbers are usually written out in words in order to prevent reading and typing errors. In today's everyday life, numbers are mostly written with the Arabic numerals that are common in Germany , but the letter spelling is still common for dates in the Jewish calendar , for example .

The oldest form is unvocalized text, as it is in old Bible manuscripts and is still used today for scrolls with Bible text. It already contains matres lectionis , but neither punctuation marks nor diacritical marks of any kind.

In order to fix the reading of the consonant text of the Holy Scriptures for the worship service, various systems of vocalization (Hebrew Nikud, literally "dots") were developed. The Tiberian system has been fully developed since the 8th century and has prevailed over the Palestinian and Babylonian systems. The name is derived from the place Tiberias , where this system originated. Vowel signs consisting of dots and small lines are placed under the consonants according to which they are pronounced. However, Cholam is placed on the left above the preceding consonant or on the right above the following letter, and Schuruq is a point to the left of the Vaw. A vowel that is written in the unvocalized text by a mater lectionis appears in the vocalized text as a vowel mark, which is followed by the mater lectionis - this is retained, and after removing all vowel marks, the biblical unvocalized spelling is available again. The dots comment on the text without changing it.

This form has a high degree of clear legibility due to the fact that, with very few exceptions, consonant and vowel signs are always alternating, the former consisting of exactly one letter and the latter either just a punctuation mark or an additional mater lectionis . It is therefore also used in modern texts when absolute uniqueness is important, for example in dictionaries (in which you can then dispense with the pronunciation of the pronunciation), also in poems and sometimes in children's books for easier reading, in sacred scriptures intended for study and in most prayer books, but not in everyday texts. The vocalization is also used in the Masoretic text to distinguish between Ketib (= 'written, it is written as it is written') and Qere (= 'Read!'), To indicate that a word is to be read differently than the text or that there are alternative forms of text. Handwritten Torah scrolls as used in worship, as well as certain religious texts, do not contain any vocalization, as they reduce the ambiguity of some words to a certain meaning and thereby restrict and interpret the text , as is comparable with the division of the text into chapters and verse happens.

The following can occur as matres lectionis :י Iodine according to Sere or Chiräq, very rarely also according to Qamaz or Seggol;ו Waw after Choläm or (mandatory) as part of Schuruq and Choläm magnum;א Aleph after almost all vowel markers;ה Hey only at the end of the word. Vowels with mater lectionis are always long; Chiräq and Seggol are long precisely when they have a mater lectionis . The matres lectionis almost never appear in Latin transcription.

The terms “long” and “short” and the distinction between the two Schwa are important for the syllable structure; As far as today's debate is concerned, however, they are meaningless. The long vowels appear in most of the open syllables (not terminated by a consonant) and in stressed final syllables terminated with only one consonant; Schwa is not counted as a vowel. Today only the vowels written as iodine and the open, stressed final syllables are spoken long; for example "shalom" (שָׁלוֹםSchin-Qamäz-Lamed-Choläm magnum meme), despite its two “long” vowels, pronounced like “Schallomm” (short, unstressed a and short, accented o) instead of “Schahlohm” (both vowels long). The Schwa mobile is also omitted - except in some prefixes - if the rest remains pronounced.

In vocalized texts, diacritical marks not only designate the vowels, but also specify some consonants in their pronunciation:

In addition to the diacritics of the previous section, the masoretic Bible text contains other characters, the teamim , which structure the Bible verses in a similar way to punctuation marks and determine the melody used when chanting. They are only used in Bible texts.

In post-biblical times, even before the development of the Tiberian vocalization, the letters Jod and Waw were used more often than in the biblical model as matres lectionis, sometimes also for short vowels. If these two letters appear as consonants, this is indicated in many positions by doubling to distinguish them from Matres lectionis. Overall, this increases the legibility compared to the unvocalized text such as in Bible manuscripts. Modern Hebrew texts are written this way throughout.

The rules for using the additional letters are relatively complex. A full outline can be found in Simon's textbook; Only the most important differences to vocalized writing are listed below.

In some places Matres lectionis are written where there is only one vowel mark in the vocalized text:

In addition, consonant iodine and vav are used within the word, i.e. H. after the first consonant of the word stem and before the last letter of the whole word, written twice - Waw always, iodine not before or after matres lectionis .

These rules are not or not all applied if this would lead to an accumulation of iodine and vav. There are also additional rules that ensure that different forms of the same word - and vice versa, analog forms of different words - are written more similarly than would be the case if the above rules were applied mechanically.

Some small, frequent words do not change their word image compared to the vocalized spelling - and thus the biblical model. Biblical names too, e.g. B.

are mostly written with the traditional consonant inventory, even if they are the names of people today. Foreign words and names tend to get even more matres lectionis than according to the above rules, e.g. B. historja היסטוריה, Bali באלי.

The language committee, later called the Hebrew Language Academy, published rules for non-vocalized writing in 1949 and 1968. According to them, the letter Vav should be dotted when it is used as mater lectionis , and dots that change the pronunciation of consonants (Dagesch in Bet, Kaf and Pe; dot on Sin; Mappiq in He) should also be used. These rules did not prevail. However, you will occasionally find texts that adhere to some or all of these rules.

In some dictionaries you will find words that have a mater lectionis or a double-written letter only in the modern non-vocalized spelling, the simultaneous indication of punctuation and additional letter. It should then be possible to draw conclusions about both spellings and the pronunciation. This is particularly the case when the alphabetical sorting is based on the modern non-localized spelling. This notation is not used for continuous texts.