The title of this article is ambiguous. Further meanings are listed under Alphabet (disambiguation) . 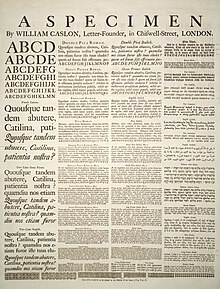 An alphabet (early New High German from church Latin alphabetum , from ancient Greek ἀλφάβητος alphábētos ) is the entirety of the smallest characters or letters of a language or several languages ​​in a fixed order. The letters can be linked to words using orthographic rules and thus represent the language in writing. The alphabetical order of the letters allows the alphabetical sorting of words and names, for example in dictionaries. According to some definitions, the alphabet does not mean the set of letters in their fixed order, but the order itself.

Alphabet fonts , like syllabary fonts, belong to the phonographic fonts and are thus in contrast to pictographic or logographic systems in which the characters stand for terms (e.g. cattle, sunrise, friendship ). In contrast to syllabary fonts, alphabetical letters usually only denote one sound ( phoneme ). In this way, the abstraction that is essential for learning to speak is saved to a high degree in writing and the learning of completely new symbols for everyday objects is saved. The so-called Abugidas , to which the Indian scripts belong, represent an intermediate form of alphabet and syllabary .

The alphabet is also used to learn to read and write ; The letter tables were an aid to memory . Someone who can read is technically also referred to as an alphabet , the opposite is illiterate . An important goal of cultural policy is the literacy of the respective population - that is, the mastery of reading and writing by everyone.

The German alphabet is a variant of the Latin alphabet . From this come 26 letters:

Overview of the alphabets used worldwide

The letters of an alphabet are written symbols for the smallest, meaningful, phonetic units of the language, the phonemes ; For example, different ⟨ t ⟩ and ⟨ s ⟩ in ⟨ skin ⟩ and ⟨ House ⟩ the meaning of words (see also minimal pair and allophone ).

In an ideal alphabet , each letter corresponds to a phoneme and vice versa. In practice, however, there are always deviations:

If characters for phonemes are missing in a writing system, linguistic (content) differences may not be reproduced in writing. Some alphabets originally only consisted of consonants ( consonant writing ). Later they were supplemented with symbols for vowels, which could be added as small additions (e.g. dots, dashes) to the consonants (e.g. Arabic and Hebrew alphabet).

If, on the other hand, there are too many characters for phonemes in a writing system, semantic (content-related) differences can be expressed in writing even with the same sound. For example, in the German ⟨ lark ⟩ and ⟨ larch ⟩.

The writing systems for most European languages ​​use variants of the Latin alphabet . Similar sounds of the respective language were assigned to the characters for Latin sounds. The same characters were used in the various languages ​​for sometimes different sounds. In addition, it has come in the course of language development to more changes in pronunciation (see. ⟨ J ⟩ in German and English).

Since the number and type of phonemes in the various languages ​​is different, the character set of the Latin alphabet was often insufficient. Therefore, the representation of the respective phonemes letter combinations were (z. B. ⟨ ou ⟩, ⟨ ch ⟩, ⟨ sz ⟩) and diacritics (z. B. on ⟨introduced ö ⟩, ⟨ š ⟩).

An absolutely phonetic alphabet would be useless in practice because it would have a large number of characters due to the diverse nuances of a language. An alphabet that has been optimized in terms of phonetic reproduction is the IPA , which assigns a graphic symbol to as many sound nuances as possible.

A phonemic notation treats different pronunciations of the same phoneme in the same way. For example, in the German orthography regional differences (phonetic) pronunciation of the phoneme / g / in ⟨ day ⟩ as a North German [ taχ ] and High German [ Tak ] not be considered. In addition, morphemic spellings ensure a more constant typeface in inflection, e.g. Example because of the plural one writes days not * ⟨ Tak ⟩ but ⟨ day ⟩, and in Derivation, z. B. ⟨ daily ⟩ instead ⟨ teglich ⟩.

When people verbally tell each other the correct spelling of a word by naming all the letters of that word one after the other, this process is called spelling (verb: spelling ). Here are consonant letters mostly with the help of additional vowels pronounced in English, for example, [be] for B or [KA] for K (see naming the letters ). To avoid misunderstandings, you can also pronounce specific names or words that begin with the letter in question, for example "Anton" for A or "Berta" for B (see spelling table ).

→ Main article : History of the alphabet

From the cuneiform scripts used in the Middle East , traders in Ugarit developed around 1400 BC. The first alphabetical script, the so-called Ugaritic script . From this writing around 1000 BC. Among other things, the Phoenician alphabet developed, which in turn was the starting point for the alphabets in use today. The Phoenicians used elements of existing picture scripts. They completely detached the signs from their figurative meaning and assigned them sound values. The Phoenician script ran from right to left. Despite the great differences in the shape of the characters, the Phoenician letters can be associated with the cuneiform characters of the Ugaritic script.

The Phoenician script was a pure consonant script . This corresponded to the structure of the Semitic languages . The Hebrew and Arabic script that emerged from it have (largely) dispensed with vowels to this day . When the Greeks around the 10th or 9th century BC When they took over the Phoenician script, they used symbols for certain Semitic consonants that did not appear in their language to denote vowels, e.g. B. the letter H for a rough breath in the Greek alphabet became a sign for a vowel (see letter Eta ). Some characters for consonants that the Phoenician language did not know have been recreated, e.g. B. the psi . In 403 BC The alphabet was standardized in Athens. It thus became the writing system for all of Greece.

Beginning of the 4th century BC Greek settlers brought the alphabet to Italy, where the Etruscans (in what is now Tuscany) adopted it during the 4th century. In the 3rd century BC The Romans based themselves on the Greco-Etruscan script and handed it down in the 1st century BC. To Central Europe.

The alphabet created a system with comparatively few characters. In order to understand the records of the ancient Egyptians , one had to learn hundreds, and later even thousands, of hieroglyphs . Now two dozen characters were enough to write down all the thoughts that could be formulated at all. The simplicity of this system made it easy to spread across half the world.

"Although human speech tools can generate a huge number of sounds, almost all languages ​​are based on the formal recognition of only about forty of these sounds by the members of a society." ( Jack Goody ).

The order of the Greek and Latin alphabet follows globally (with a few exceptions) the order of the Phoenician alphabet, as the characters were also linked to a numerical value.

Alphabets in the broader sense 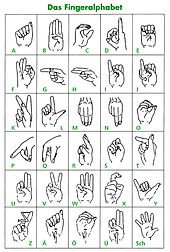 The letters (characters of an alphabet) usually consist of lines and can be written on paper, for example. The defining characteristic of a letter, however, is not its form, but its function, to represent a speech sound or a sound connection. That is why one speaks in a broader sense of alphabets for the following character systems:

In computer science , the terms alphabet and letter are used in a generalized sense. A “letter” here can also be a number or other symbol - “alphabets” and “words” can contain any such symbols. See also alphabet (computer science) and formal language .