The Aramaic script was used by the Aramaeans for their Aramaic language around 900 BC. Developed from the Phoenician script and laid the foundation for most other Semitic scripts . It was widespread in the area from Asia Minor to India . Nowadays, descendants of the script ( Arabic , Hebrew , Syriac , Mandaean , etc.) are used for writing .

Relief of Bar-Rakib (8th century BC) with Old Aramaic inscription: "I am Barrakib, son of Panamu (wa) "

The oldest verifiable language level of Aramaic, Altaramaic , has been inscribed since the 10th century BC. Occupied. The Phoenician script was initially used for this, for example for the inscription Zakkurs from Hamath or the inscriptions of the Bar-Rakib from Sam'al from the 8th century BC. Only gradually did a separate Aramaic script develop, which finally found general distribution in the Achaemenid Empire .

Imperial Aramaic papyrus (427 BC) from Elephantine , which in a will determines the release of two female slaves. The text begins: "On Siwan 20 , that is the 7th day of Phanemoth, in the year 38 of King Artaxerxes ..."

The oldest surviving Aramaic papyri have been found on the Upper Egyptian island of Elephantine in the Nile , that is, on the outermost edge of the Achaemenid territory. There was u. a. a Jewish military colony. The Elephantine papyri contain literary texts, letters and private law contracts from the 5th to 4th centuries. Century BC And are written in the so-called Imperial Aramaic. The Aramaic script is already fully developed there.

The Aramaic script retained until the turn of the 3rd and 2nd centuries BC. BC in most of the Near East a very uniform form. From then on, aided by the political fragmentation that led to the formation of various political and cultural special communities, it splits into several branches, each of which has its own, e.g. Some of them developed very significantly. These are the Hebrew , Syrian and Nabataean script (from which the Arabic script was also formed). 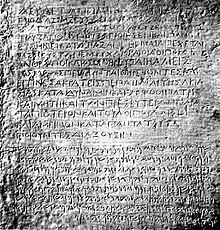 Bilingual inscription of Ashoka in Greek (above) and Aramaic (below) from the 3rd century BC. Chr.

The Mandaean script and the ancient Indian Kharoshthi script also emerged from Aramaic . The origins of the Brahmi script , from which today's Indian scripts are derived, are unclear, but it is likely that it either derives directly from the Aramaic script or was modeled on it. In the inscriptions of Ashoka from the 3rd century BC The Aramaic script is used alongside the aforementioned Indian scripts.

It was not until the 7th century AD that the Aramaic language and script slowly gave way to Arabic . In language islands, it has only survived for a long time in Lebanon, Syria, Iraq, Turkey and Iran ( see: Syrian language ).

The word “Aramaic” in East Syriac script, in the Syriac language

The Aramaic script has found the most widespread use of the northwestern Semitic scripts. Since 900 BC It was used in the course of the use of the Aramaic language as a lingua franca in Babylonia , Assyria ( Akkadian ), Syria and Palestine . It has split into different branches, many of which have survived to this day, including the Arabic script and the Hebrew script . In late antiquity, Aramaic (in the form of " Syriac ") was the most important language of the oriental Christians and was used as a lingua franca as far as China.