This article is about ceramics. For clay, see bolus armenicus 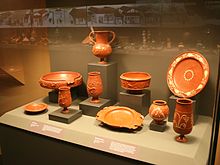 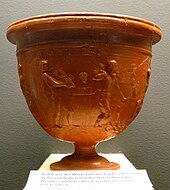 Samian ware (TS) is the modern name of a particular category Roman tableware made of ceramics that towards the end of the 1st century. Was developed in Italian workshops ( Arezzo ). The upscale tableware was produced in large quantities in craft businesses ( manufactories ), which usually provided their goods with a manufacture seal. The goods were sold in various variations throughout the Roman Empire .

The dishes covered in glossy red are basically divided into smooth goods or vessels decorated with reliefs made with models . Both were made with the rapidly rotating potter's wheel, but the production of the relief-decorated goods was more complex. For the production mostly thick-walled bowls, so-called shaped bowls, were made. The inside was decorated with individual (positive) hallmarks. A so-called egg stick usually closes the decorated zone at the top. With picture bowls in South Gaul, edges with notched ornamentation are common. After the fire, numerous individual vessels could be shaped in a mold in which the decoration appears negative. The vessels designed in this way, especially bowls, were then turned (attaching the foot and shaping the edge).

The vessels received the smooth-walled glossy coating ( engobe ) in a leather-hard condition. To do this, they were dipped in very fine clay. The color of the coating varies between dark and orange-red, the latter is often characteristic of Rheinzabern Sigillata. It depends on the iron content of the clay and the various oxidation levels of the iron in the fired clay.

The vessels were oxidized in special ovens for about five days at temperatures of around 950 ° C. Disturbances in this process could result in high losses, which are well documented by the discovery of false fires at the manufacturing sites . The ovens had a reinforced threshing floor and a long poking channel. Fragments of pottery invoices from La Graufesenque near Millau in southern France show average furnace fillings with 30,000 vessels.

Bowl or bowl drag. 30 in the Antiquarium in Milan 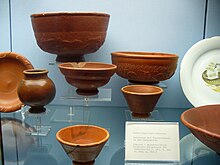 In the medieval drug trade, terra sigillata referred to compressed and sealed healing earths in tablet form , which were based on fatty and heavy clay and were traded in several shades. The seals that are applied to the small shaped bales should authenticate the origin. The sealing earths differed in color, consistency, smell and taste and accordingly in the healing properties attributed to them. The most common remedies were soils from the Mediterranean region (for example Eritrea , Crete , Samos , Limnos and Malta ). The bolus armenicus, also traded as terra sigillata, originally came from Armenia .

In addition to healing earths from other places of production (for example the Geisloch near Münzinghof ), the sealing earth from the Silesian town of Striegau , now the Polish Strzegom in the Lower Silesian Voivodeship , achieved great fame in Europe under the name Terra sigillata Strigonensis and the place achieved a monopoly position with corresponding wealth. The Paracelsist Johannes Scultetus Montanus is considered to be the discoverer of the sealing earth in Silesia and its medical significance . The sealing earth was regarded as a miracle cure against almost all ailments, but especially as an antidote for poisoning . This was even verified by several German provincial princes in controlled studies on animals and humans, which is considered to be one of the first clinical studies . In two cases, dogs were poisoned by the mayor of Jülich and by Landgrave Wilhelm IV of Hessen-Kassel (whose personal physician Georg Marius published a paper on terra sigillata as a medicine in 1589 ), with one group also receiving the sealing earth and surviving, while the other dogs died (or in the last test a dog was saved by the sealing earth). Count Wolfgang II von Hohenlohe then had his doctors try out the sealing earth on a prisoner who also survived the poisoning. In addition to various other clays, Marius also examined a red and white earth that he found on the Königsstuhl near Heidelberg and called it "Bolus Heidelbergensis". Terrae sigillatae, especially imported during the Levant trade , were particularly popular as medicinal products in Europe, were accordingly expensive and were accordingly adulterated with local products or replaced by them (e.g. in the form of marl ).

The term Terra Sigillata was only transferred to ancient ceramics in the 18th century because of the potter's stamp. A name from ancient times is not certain. The term Samian Ware, used in the English-speaking world, comes from the mention of vasa Samia by Pliny the Elder , of which, however, it is not entirely certain whether it refers to TS. Research into the Terra Sigillata has a long tradition in archeology . The chronology is based primarily on the forms, as well as the manufacturer and picture stamp. The first chronological classifications come from Hans Dragendorff (1896) and Robert Knorr . In particular, the pottery stamps, the decorations and the distribution of the material have made TS a preferred means of dating in Provincial Roman archeology . The manufacturers are known by name from numerous production locations due to the manufacturer's stamp. In addition, there were observations at well-dated sites such as the Roman camp Haltern , the forts of the Odenwald Limes or the Niederbieber fort . The further use and molding of the hallmarks made it possible to determine the chronological order of the individual potters at the production sites. All of this has led to the fact that the time when a decorated or stamped TS vessel was manufactured can usually be dated to within a few years. Similar exact dates can only be achieved with coin finds or through dendrochronology , depending on the material found .

In addition to the hallmarks and potter's stamps, the shape of the vessel is also suitable for dating, as this depended on fashions and, for example, in the case of the TS mortars, on table manners. The current names of the vessel shapes mostly go back to well-known researchers (Dragendorff, Knorr, Déchelette ), or to sites (Haltern, Hofheim).

As an inexpensive imitation of metal vessels, glossy crockery was widespread in the Hellenistic Mediterranean area centuries before the emergence of the terra sigillata. The so-called Campana used in southern Italy , however, was fired in a reducing process and therefore predominantly black. First attempts with oxidizing fires are known in the case of the Eastern Sigillata from northern Syria. Around the middle of the 1st century BC A group of potters in Arezzo seems to have adopted this technique. The pottery quickly gained great popularity and was widely exported as the empire expanded.

Production came from Italy to the north-west provinces, initially to southern France. The earliest production took place at Lugdunum ( Lyon ) as a subsidiary of the Italian pottery. Soon afterwards, large pottery centers in southern Gaul formed, for example in Montans , La Graufesenque or Banassac . As in Lyon, they first made vessels based on Italian models, and then established their own shapes. The steep-walled Dragendorff 29 and 30 bowls are popular vessel shapes in South Gallic pottery; later, the Drag bowl was added to these ornate shapes. 37, which has a more rounded wall and the shape of Drag. 29 replaced. Ornaments often consist of tendrils and other floral motifs.

In the 3rd century, production was dominated by the large companies in Rheinzabern ( Tabernae ) and Trier ( Augusta Treverorum ), which primarily had good transport options and raw materials. The Terra Sigillata Museum is dedicated to the production of Terra Sigillata in Rheinzabern , where numerous production finds are exhibited. The knowledge about the production of the hallmarks seems to have gradually been lost during this period. Their quality declines in the course of the 3rd century, as does that of the goods as a whole. The coating is often rubbed off on TS finds from the 3rd century. Frequent impressions make the shape of the counters more coarse. Instead of the hallmarks, so-called barbotine decoration is now often used - splashes of very finely muddy clay with which round plastic decorations were applied to the vessels. The emergence of TS grating bowls (with a spout and fine grits on the inside; mostly drag. 43 and 45) suggests a change in eating habits, namely the preparation of food at the table.

The East Gaulish production location Rheinzabern in the Palatinate had several branches established at the end of the 2nd century, which produced the so-called Swabian goods: in Nürtingen , Waiblingen and Stuttgart- Kräherwald. Further manufacturers east of the Rhine were in the provinces of Noricum and Raetia , z. B. in Pfaffenhofen am Inn and Westerndorf (Rosenheim) . In England only one TS manufacturer is known from Colchester .

In late antiquity, new workshops were set up in the Argonne , which no longer continued the model-shaped relief ornamentation, but applied simple roller stamp decorations directly to the vessels (wheel sigillata).

The late antique argon sigillata is the last major phase of sigillata production. The factories in what is now the Argonne region produced ceramic vessels from the 2nd century AD to the 4th century AD (in some cases even in the 5th century in Chatel-Chéhéry). The main production center of this phase was today's Lavoye. Decorated argon sigillata is different from the earlier terra sigillata, as it is no longer decorated with shaped bowls, but with so-called "rolling wheels". These scroll wheels are used when the clay is leather-hard to decorate the goods with decorative ribbons. The tools that were used for this were mostly made of flint or bone. Argon sigillata was made from Gault clay, which was greyish green to greyish blue in color.

Imitation of the terra sigillata technique

The technology was already being imitated in Roman times, mostly without reaching the technical standard of the TS. Examples of such local imitations are the so-called marbled goods , Raetian varnish goods , Terra Nigra or frequent in the lower Main area Wetterauer goods .

In the area of ​​today's Switzerland, TS imitations defined by Walter Drack were widespread, which can be found particularly in Augusta Raurica, Vindonissa and Baden.

In 1906, the Bavarian art potter Karl Fischer received a patent for the reinvention of the terra sigillata production from the imperial patent office in Berlin. Today the ceramic handicrafts produce partly imitated Terra Sigillata vessels.