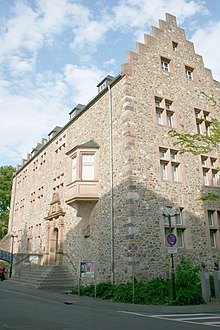 The Upper Hessian Museum is a universal museum in the central Hessian city ​​of Gießen . The museum is housed in the old castle in Gießen , the Wallenfels'schen Haus and the Leib'schen Haus . The city of Giessen is responsible for this.

The old castle of Gießen was built around 1330 under Landgrave Heinrich II to reinforce the medieval city fortifications. Over the centuries it served as a landgrave's residence, city and fortress command, chancellery, police headquarters, barracks and warehouse. In 1893, Grand Duke Ernst Ludwig of Hesse and the Rhine donated the Old Castle, which he owned privately, to the city, which in turn had to undertake to renovate the now dilapidated building and use it as a museum. In 1905 the renovated building was made accessible to the public and the collections of the Upper Hessian Association for Local History were shown together with the Gail collections - a foundation of "antiquities and objects of ethnology" by the industrialist Wilhelm Gail (1854-1925). In addition to the new museum rooms, Grand Duke Ernst Ludwig received an apartment in the old castle donated by the citizens of Giessen, which the sovereign used as a prestigious shelter. The famous Art Nouveau artist Joseph Maria Olbrich was hired for the plans and execution .

The first director of the museum was Karl Kramer (1850–1928), who from 1896 headed the collection of the history association and then - until his death - headed the Upper Hessian Museum. The first full-time director was Herbert Krüger in 1938 , who ran the museum with interruptions in 1942 and 1948 for thirty years. The old castle was almost completely destroyed in bombing raids in December 1944 and only rebuilt in the late 1970s. From 1978 to 2013, Friedhelm Häring , who has a doctorate in art history, was director of the museum, who has also been director of the city's cultural office since 1991. The construction of the three historical museum buildings and the extensive expansion of the collections took place during this period.

In 2013, the Museumsgesellschaft Gießen - Association for the Promotion of the Upper Hessian Museum was founded, which supports the museum as a recognized non-profit association.

In November 2014, the art historian Sabine Philipp, originally from Franconia, took up a four-year position as museum director. Before the end of the contract, she left the museum to take over the management of the Stadtmuseum am Markt in Wiesbaden in January 2018. In November 2018, the Berlin art historian Katharina Weick-Joch took over the management of the museum.

In 1980 a new building was opened, which preserved the external, historical shape of the castle, but dispensed with a reconstruction of the interior. Since then, the castle has housed the picture gallery and the arts and crafts department of the Upper Hessian Museum, the “Gail's collections”, as well as the administration of the museum. The picture gallery includes works from the baroque to art nouveau to the present day. The focus of the collection is on paintings from the 19th century. The painters represented include Carl Geist , Franz von Stuck , Carl Spitzweg and Heinrich von Zügel . Recent paintings include works by the Quadriga group and the ZEN 49 group .

The ballroom, named after Giessen's Israeli twin city Netanya , is located on the ground floor and is used for concerts, readings, lectures, vernissages and conferences. In an exhibition room also on the ground floor, changing exhibitions on contemporary art and occasionally on cultural-historical topics are shown. Around 220 exhibitions have taken place since 1980, at which works by Conrad Felixmüller , Bernhard Jäger , Walter Stöhrer , Herlinde Koelbl , Barbara Heinisch and Elvira Bach were on view.

The Leib'sche Haus is a four - story half - timbered house built in 1350 . The former Burgmannenhaus is a rudiment of a moated castle built by the Counts of Gleiberg in 1152. The individual departments show exhibitions on the city's history , folklore , civil cultural history from the 18th to the early 20th century, as well as regional craft and industrial history .

The Wallenfels'sche Haus is located right next to the Leib'schen Haus and is structurally connected to it. It houses the collection for prehistory, early history, ethnology and archeology. In addition to finds from Hessen , exhibits from the Mediterranean area are also shown in the museum. These are items on loan from the Archaeological Institute of the Justus Liebig University in Giessen . There is also a large collection on Tibetan culture in Wallenfels' house , which includes a Tibetan sand mandala .