As the son of a village miller , Franz Stuck attended the Königliche Kunstgewerbeschule in Munich from 1878 to 1881 , where he was encouraged by Ferdinand Barth to continue his artistic training at the Munich Academy until 1885 . He was first successful as a draftsman. Even during his school days he provided illustrations for magazines.

During his studies he created humorous drawings and designs for the arts and crafts. The twenty-two-year-old artist became known beyond Munich in 1882 with his allegory and emblem designs for the Gerlach & Schenk publishing house in Vienna, a portfolio in which other young artists such as Max Klinger and Gustav Klimt also collaborated. In another collection from the same publisher, cards and vignettes , Stuck successfully continued his witty drafts of classic picture tasks in 1886.

Stuck's name became popular through a series of caricatures for the magazine Fliegende Blätter , for which his teacher at the Ferdinand Barth School of Applied Arts had already worked, whose style the young Stuck was also inspired by. It was not until 1887 that he began to experiment with oil painting.

In 1892, Stuck and Wilhelm Trübner founded the “ Munich Secession ” in opposition to the established artists . Nevertheless, along with Franz von Lenbach and Friedrich August von Kaulbach , he is counted among the Munich painter princes . This is an outward designation, because from an artistic point of view, Stuck was the opposite pole to Lenbach in the dispute that culminated in the establishment of the Munich Secession in the 1890s . During these years he was also a member of the Munich Association for Original Etching , which was close to the Secession.

From 1895 Stuck was a professor at the academy and taught among others Wassily Kandinsky , Paul Klee , Josef Hengge , Georges Kars , Paul Stollreither and Heinrich Strieffler . On behalf of the Cologne chocolate producer Ludwig Stollwerck, he designed collecting pictures for Stollwerck scrapbooks , including the series "The Muses" for the Stollwerck scrapbook no. 4 from 1899.

In 1897 Whistler founded the International Society of Sculptors, Painters and Gravers in London, Stuck was one of the members. In 1903 Franz Stuck was one of the founding members of the German Association of Artists and, as a jury member, also on the extended board of the DKB. At the first Künstlerbund exhibition in 1904, which was still organized by the Munich Secession, Stuck was represented with four large oil paintings.

Prince Regent Luitpold awarded him the Knight's Cross of the Order of Merit of the Bavarian Crown on December 9, 1905 . Associated with this was the elevation to the personal nobility status and he was allowed to call himself "Ritter von Stuck" after his entry in the nobility register on January 2, 1906. In 1912 he received the commander of this order.

In 1906 Stuck was also a founding member of the German Monist Association . In 1914, Stuck signed the Declaration of the Manifesto of 93 , which turned against Allied atrocity propaganda.

At the end of February 1919, Stuck was hostage of the revolutionary Red Guards for a few days during the Munich Soviet Republic . Captured in the Munich suburb of Haidhausen , he met the surgeon Ferdinand Sauerbruch , who had provided medical care to the Eisner assassin Anton von Arco in Munich (later Stuck was part of the domestic affairs of the Sauerbruch couple).

An example of Stuck's idea of ​​a total work of art is his villa, completed in 1898 and built by the Heilmann & Littmann construction company , on Prinzregentenstrasse in Bogenhausen, with furniture and sculptures that he made himself. For this achievement, shortly before his death in 1928, he was awarded an honorary doctorate from the Technical University of Munich . Today the Villa Stuck is a museum ; it reopened in March 2005 after thirteen years of planning, building and restoration work .

For a long time Stuck was seen as a representative of Munich Art Nouveau . This also led to the fact that his villa was later run as an Art Nouveau museum with the seat of the "Art Nouveau Association Franz von Stuck". The art historian and interim director of the museum, Alexander Rauch , first recognized and emphasized the great importance of Stuck as an artist of symbolism through the exhibition Franz von Stuck, which was shown in Passau, Munich, Vienna, Aschaffenburg etc. in 1992 . This resulted in a completely higher reassessment of his work. Above all, the later works of the 1920s - at first far less attention - were recognized as important creations of German, especially Munich, symbolism. The catalog text also analyzes the entire facility and its sequence of images as a refined scenario of symbolist ideas in which biographical and personal elements are interwoven with esoteric and ancient ideas.

Von Stuck was buried in the forest cemetery in Munich / Alter Teil in grave no. 95-W-16. He was the stepfather of Otto Lindpaintner . His only biological child, Franziska Anna Marie-Louise, called Mary (1896–1961), came from a love affair with Anna Maria Brandmaier (1875–1944). Mary was used in 1904 with the approval of the Prince Regent by her father Franz von Stuck and his wife Mary. Lindpaintner (1865–1929, married March 15, 1897). The daughter Mary married the then 31-year-old consul and building contractor Albert Heilmann in 1917 .

For oil painting by stucco today to more than 500,000 dollars paid. 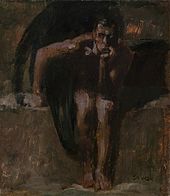 Stuck's poster for the VII International Art Exhibition in Munich (1897) 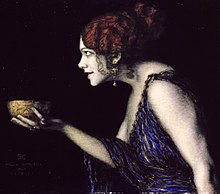