Manifesto of the 93rd

To the cultural world! , known as the Manifesto of 93 , was a manifesto writtenby Ludwig Fulda as secretaryin September 1914, signed by 93 scholars, artists and writers in Germany, and published in October 1914. The manifesto is aimed primarily at thestates that were still neutralduring the First World War and denies the allegations that the war opponents made against Germany.

In the course of the German invasion of neutral Belgium at the beginning of the First World War, there were numerous attacks by the German military on the Belgian civilian population. The German advance was under considerable time pressure, since the strategic concept of the Schlieffen Plan provided for the military overthrow of France in the shortest possible time, in order to be able to take action against the Russian offensive in the east. In many cases, the German military reacted drastically to actual or alleged acts of sabotage by Belgian civilians. Several thousand Belgian civilians died in the process ( Rape of Belgium ). The destruction of the university town of Leuven also aroused particular consternation and outrage in neutral foreign countries when, among other things, an irreplaceable inventory of medieval books and manuscripts in the Leuven university library went up in flames. The German armies were therefore portrayed as culture-destroying barbarians and "Huns", especially in the Anglo-Saxon region.

In response to these allied allegations, leading German journalists and intellectuals decided to draft a manifesto in which the allegations were presented as unjustified and the German measures presented as self-defense in self-defense. The tenor of the manifesto reflects the nationalistically excited mood of the August experience . In terms of the number of signatories, but also the radical nature of the statements, the manifesto was exceeded by the declaration of the university lecturers of the German Reich with more than 3000 signatories of October 16, 1914.

The appeal was initiated by the businessman Erich Buchwald, who had already talked to the writer Hermann Sudermann about this matter . In addition to various scientists and writers, representatives of the Foreign Ministry, the head of the news office of the Reichsmarineamte Heinrich Löhlein and other political figures were involved in the preparation . Ludwig Fulda finally wrote the manifesto based on the language of Martin Luther's 95 theses .

The initiators have been soliciting supporters personally and by telegram since September 19, 1914. There was a wide range of signatories. Designated pacifists such as Albert Einstein , Friedrich Wilhelm Foerster (son of Wilhelm Foerster) or Hermann Hesse were not even asked. Many of the signatories, especially members of the Goethe Bund , probably signed without knowing the text. Lujo Brentano , for example, very soon publicly distanced himself from the appeal, stating that he did not know the text when consent was given. Even Max Planck later made his distancing claimed, but had about two weeks later (like Otto Hahn ) signed the Declaration of University Professors.

It was published in all of Germany's major newspapers.

“ To the cultural world! An appeal

As representatives of German science and culture, we protest in front of the entire cultural world against the lies and slander with which our enemies seek to defile Germany's pure cause in the difficult struggle for existence that has been forced upon it. The iron mouth of events has refuted the spread of fictitious German defeats. All the more eagerly one now works with distortions and suspicions. We speak out loudly against them. She should be the herald of the truth.

It is not true that Germany caused this war. Neither the people wanted him, nor the government, nor the emperor. On the German side, the extreme has been done to avert it. The world has documentary evidence of this. Often enough, in the 26 years of his reign , Wilhelm II has shown himself to be the patron of world peace; often enough even our opponents have recognized this. Yes, this same emperor, whom they now dare to call Attila , has been mocked by them for decades for his unshakable love of peace . Only when a superior force, lurking at the borders for a long time, attacked our people from three sides, did they rise up like a man.

It is not true that we have deliberately violated Belgium's neutrality. There is evidence that France and England were determined to injure them. It can be shown that Belgium agreed to this. It would have been self-destruction not to forestall them.

It is not true that the life and property of a single Belgian citizen have been touched by our soldiers without the bitterest self-defense requiring it. Because over and over again, in spite of all warnings, the population shot at them from ambush, mutilated the wounded, and murdered doctors while they were doing their Samaritan work . There is no more vile falsification than hiding the crimes of these assassins in order to make the Germans a crime of the just punishment they suffered.

It is not true that our troops raged brutally against lions . With a heavy heart they had to retaliate with a heavy heart by bombarding a part of the city against a frenzied population who treacherously attacked them in the neighborhood. Most of the lions have been preserved. The famous town hall is completely intact. With self-sacrifice, our soldiers saved it from the flames. - If works of art were destroyed or are still being destroyed in this terrible war, every German would complain. But just as we do not allow anyone to surpass ourselves in our love of art, we resolutely refuse to buy the preservation of a work of art with a German defeat.

It is not true that our conduct of war disregards the laws of international law . She does not know of unbridled cruelty. In the east, however, the blood of the women and children slaughtered by Russian hordes soaks the earth, and in the west dumdum bullets tear the chests of our warriors. Those who ally themselves with Russians and Serbs and offer the world the shameful spectacle of inciting Mongols and Negroes against the white race have the least right to act as defenders of European civilization .

It is not true that the fight against our so-called militarism is not a fight against our culture, as our enemies hypocritically pretend. Without German militarism, German culture would long ago have been erased from the face of the earth. For her protection he emerged from her in a country that for centuries was plagued by raids like no other. The German army and the German people are one. This consciousness fraternizes 70 million Germans today, regardless of education, class or party.

We cannot wrest the poisoned weapons of lies from our enemies. We can only shout out into the whole world that they bear false witness against us. To you who know us, who have hitherto guarded the highest property of humanity with us, we call out to you:
Believe us! Believe that we will fight this struggle to the end as a cultured people to whom the legacy of a Goethe , a Beethoven , a Kant is just as sacred as his hearth and his clod.

We vouch for this with our name and with our honor! " 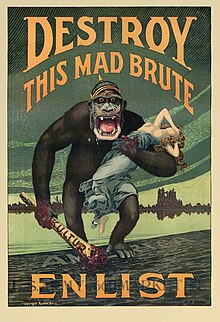 Destroy This Mad Brute - Enlist , 1917 US propaganda poster depicting Germany as a wild beast. The stick is labeled "Culture" in allusion to the 93 manifesto.

The manifesto received considerable attention both at home and abroad as a means of propaganda during the First World War . Critics saw it as an example of an arrogant and naive self-overestimation of the German intellectuals of the time.

At home, the call contributed to general enthusiasm for war in Germany (and was also a consequence of it). The justification of the war with the concept of culture was generally perceived as an expression of a national “ special path consciousness ” (“The world should recover from the German being”).

In contrast, German counter-statements received hardly any attention. The alleged reply in Ludwig Stein's magazine Nord und Süd with the signature of around forty personalities never existed. The " Appeal to the Europeans ", written by Georg Friedrich Nicolai at the same time, was only signed by Albert Einstein, Otto Buek and Wilhelm Foerster (who thereby withdrew his previous support for the Manifesto of 93), while the vast majority of those who wrote to it declined, to support him publicly, so that Nicolai decided not to publish it in Germany immediately.

As expected, the reaction to the manifesto in the neutral Netherlands, Sweden and the USA was cool and distant at best. The public in Great Britain was hardly impressed. British scholars published their answer to the German professors on October 21, 1914 . The appeal in France increased the hatred of Germany.

In December 1918, the French Prime Minister Georges Clemenceau described the declaration of the 93 as the worst German war crime, worse than the devastation of France and the kidnapping of civilians.