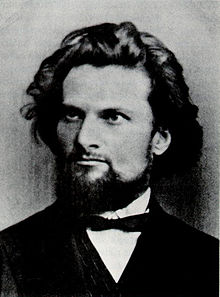 Alois (also Aloys ) Adolf Riehl (born April 27, 1844 at the Riehlhof near Bozen ; † November 21, 1924 in Neubabelsberg near Potsdam ) was an Austrian philosopher and representative of Neo-Kantianism .

Alois Riehl was born as the second of five children of the innkeeper Josef Riehl and his wife Marie at the »Riehlhof« near Bozen in South Tyrol . After attending the Franziskanergymnasium in Bozen and graduating from high school , he studied philosophy , geography and history at the universities of Vienna , Munich , Innsbruck and Graz . In 1866 he passed the state examination for the higher teaching post in Graz. In 1868 he was promoted to Dr. phil. PhD at the University of Innsbruck.

In 1870 he completed his habilitation at the University of Graz, where he was initially a private lecturer and from 1873 an associate professor of philosophy. In 1878 he was appointed full professor of philosophy. In 1882 he was offered a position at the Albert Ludwig University of Freiburg as the successor to Wilhelm Windelband . In 1896 he was appointed to the Christian Albrechts University in Kiel and in 1898 to the University of Halle . In 1905 Riehl was Wilhelm Dilthey's successor on the chair for philosophy at the Friedrich-Wilhelms-Universität Berlin .

In 1906, Sophie and Alois Riehl commissioned the then twenty-year-old Ludwig Mies van der Rohe to plan their house, the "Villa überm See" (also affectionately known as "Klösterli" by the Riehls) in Spitzweggasse 3 in the historic villa colony of Neubabelsberg, which is now is located in the Babelsberg district of Potsdam . The house was used by the Babelsberg film school during the GDR era .

In 1907, a group of German university professors, including Riehl, Richard Oehler , Richard Heinze and Hans Vaihinger , made the official proposal to award the 1908 Nobel Prize for Literature to Elisabeth Förster-Nietzsche .

Josef Riehl was a brother of Alois Riehl. His wife Sofie Riehl, b. Reyer, was an aunt of Frieda Gross, b. Schloffer, the wife of the Austrian doctor, psychoanalyst and revolutionary Otto Gross .

Alois Riehl was buried in the old cemetery of Klein Glienicke in Potsdam . A tomb - designed by Ludwig Mies van der Rohe - adorned the grave for a long time.

Within Neo-Kantianism , Robert Reininger , who published works on the psychophysical problem and the philosophy of values , and Alois Riehl as a representative of criticalism : For Riehl, philosophy is not a doctrine of worldview , but above all a critique of knowledge . Riehl emphasizes a continuation of Kant, in that new knowledge of the natural sciences and mathematics (e.g. non-Euclidean geometry ) are included.

Alois Riehl's position can also be determined through his student Richard Hönigswald : The basic problems of the given and human cognition are opposed to one another. Philosophical investigations into the thing in itself are based on thought-psychological considerations in which a connection between consciousness and object is described. It is language necessary for consciousness and only through language that can objectivity of an object are produced.

Holder of the chairs for philosophy at the University of Graz