Main building of the University of Innsbruck

The Leopold-Franzens-Universität Innsbruck ( LFU or LFUI for short , Latin Universitas Leopoldino-Franciscea Oenipontana ), founded in 1669, is the largest educational and research institution in western Austria and the most important university in Austria after Vienna . It is considered the state university of the Austrian federal states of Tyrol and Vorarlberg . Historically, she also performed this function for South Tyrol , Welschtirol (Trentino), Liechtenstein and Luxembourg , but this is no longer the case today due to the establishment of their own universities in these countries. Measured by the number of students, it is Tyrol's largest educational institution before Trento and Bolzano .

In 1562 the Jesuits built a grammar school in Innsbruck . Financed by a special tax on the Haller Salz, a full university with four faculties was founded on October 15, 1669 by Emperor Leopold I , including the law faculty in 1671/72 and the medical faculty in 1674/75. On November 29, 1781 Joseph II. Back to a lyceum reduced, took place in 1826, the restoration of the University of Innsbruck by Emperor Francis I . In honor of both founding fathers, the University of Innsbruck is called Leopold-Franzens-University Innsbruck .

At the time of National Socialism it was established in March 1941 by then-rector Raymond of Klebelsberg in German Alps University renamed. As in all universities, there were “cleanups”. Opponents of the National Socialists were disempowered and excluded from scientific operations. In 1945 it was reopened under the name of Innsbruck University after the end of World War II .

The second half of the 20th century brought further expansion steps at the university: in 1969 the Faculty of Civil Engineering and Architecture and in 1976 the Faculty of Humanities and Social and Economic Sciences, which emerged from the law and political sciences. The Faculty of Medicine was spun off in 2004 and the School of Education was founded in 2012 , which was renamed the Faculty of Teacher Education in 2018. 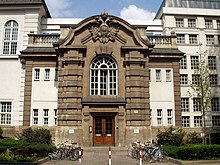 Position in Austria and Europe

Since 2011, the University of Innsbruck has been ranked in the Times Higher Education Rankings as the second best university in Austria after Vienna in places 201–225 (not broken down further). In the partial evaluation "International Outlook" published since 2013 to record the most internationally oriented universities in the world, the University of Innsbruck ranks seventh worldwide. The evaluation is based on an assessment system in which research, teaching and the international reputation of the universities are assessed in particular. The evaluation of the international visibility of the research results is particularly positive. In the QS World University Rankings (QS Ranking) it is regularly in the ranks between 260 and 280. In the Shanghai ranking , it ranks as the second best Austrian university in the ranks between 201 and 300. The Handelsblatt Ranking 2015 includes the business administration faculty the 15 best business administration faculties in German-speaking countries.

The university ranking U-Multirank , initiated by the EU , does not create any rankings, but makes the universities comparable using 34 different indicators. Here the University of Innsbruck is one of the Austrian universities with the highest grades. In the Leiden ranking, which is based on bibliometric data, the Leopold-Franzens-University does particularly well in the "Collaboration indicators". Measured by the number of publications that were written with foreign partners, the University of Innsbruck will be ranked 12th worldwide in 2020 and shows the high level of international networking.

The originally six faculties were divided into 15 faculties in 2004. In 2012 the School of Education was established as the 16th faculty; this step served as the basis for the further expansion of teacher training.

As part of the implementation of the University Act 2002 , the former medical faculty was spun off as Innsbruck Medical University in 2004 . Since then, the University of Innsbruck is no longer a full university in the traditional sense. Since this separation came about against the will of the faculty, the reintegration is discussed again and again.

Building of the SoWi Faculty in front of the Nordkette

The botanical garden in the district of Hötting

The buildings of the University of Innsbruck are spread over the city area, so it is not a “ campus university”.

The University of Innsbruck is a public corporation with the right of self-administration. The university is run by a rectorate. He is supported by the University Council and the Senate.

Senate: The Senate consists of 26 people: 13 representatives belong to the curia of university professors, 6 to the curia of university lecturers and academic staff in research and teaching, one mandate represents general university staff , and six students represent the student body. Senate chairman was Christian Smekal from 2003 to 2005 and Ivo Hajnal from 2005 to 2019 . In October 2019, Walter Obwexer was elected to succeed Ivo Hajnal as Chairman of the Senate for the term of office until September 2022, Walter-Michael Grömmer remained his deputy .

The University of Innsbruck offers 41 bachelor programs including teacher training programs, 56 master’s programs, 4 diploma programs and 27 PhD / doctoral programs (as of the 2015/16 academic year) in the fields of architecture, humanities, natural sciences, law, social and economic sciences as well as theology and technical sciences.

Selection of graduates
See also : Category: Graduates from the University of Innsbruck