After attending grammar school in Prague, Josef Georg Böhm entered the seminary and began to study theology. However, he soon switched to the philosophy faculty of Prague University , where he attended lectures in mathematics, physics and astronomy. After receiving his doctorate, he became an assistant at the Vienna observatory under Joseph Johann von Littrow in 1833 . He then worked at the observatory in Ofen and as a sub- professor for mathematics at the University of Salzburg . In 1839 he was appointed full professor for mathematics and practical geometry at the University of Innsbruck . In 1848 he was elected rector. At the same time he was also secretary of the kk agriculture society for Tyrol and Vorarlberg. In 1852 he was appointed director of the Prague observatory and succeeded Karl Kreil as a full professor of theoretical and practical astronomy at Prague University . In 1863 he suffered severe pneumonia from which he did not recover. In addition, there was an abdominal disorder and a hearing loss that led to almost deafness. On January 26, 1868, he died in the Prague Clementinum of pulmonary tuberculosis . 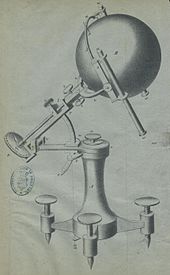 Böhm was interested in many things and worked in a wide variety of fields, mainly in the field of astronomy, but also physics, geomagnetism, meteorology, ballistics and agriculture.

In his capacity as secretary of the kk Landwirthschafts-Gesellschaft für Tirol und Vorarlberg, he published a report on fertilization experiments with guano in 1843 and published a brief guide to hop growing in 1846 .

In astronomy he dealt among other things with the observation of sunspots and the derivation of the rotation elements of the sun and developed a new method to determine the geographical latitude and the azimuth at the same time. In 1864/65 he was involved in the restoration of the Prague town hall clock without much success .

Böhm developed the uranoscope, a device for the easy identification of stars. When the instrument is pointed at a star, a pointer on the connected celestial globe points to the star being observed. This is an improved version of the Astrodeiktikon (Astrognostikon) by Erhard Weigel . Böhm brought the instrument onto the market in 1847 after showing it to a small group of interested people a few years earlier. The uranoscope appeared in several editions with celestial globes of different sizes. This was 4.5 "(12 cm) in diameter in 1847, 12" (32 cm) in 1850, and 3 "(8.5 cm) in 1854. The 1860 edition, produced in collaboration with the Prague globe maker Jan Felkl was created, had a celestial globe with a 6 "(15.8 cm) diameter, showed stars up to 5th magnitude and appeared in two versions, one with the German, one with the Latin names of the constellations .

Josef Georg Böhm was an extraordinary member of the Royal Bohemian Society of Sciences in Prague from 1853 . In 1857 he was elected a member of the German Academy of Sciences Leopoldina . For his ballistic experiments he was awarded the Knight's Cross of the Franz Joseph Order in 1862 . He was also the holder of the Saxon Albrechts Order and the Danish Dannebrog Order .