The University of Salzburg (full name Paris-Lodron -Universität Salzburg , today internally abbreviated to PLUS mainly in the administrative area ) is an Austrian university in Salzburg . It was founded in 1622 as a Benedictine university and existed in this form until it was dissolved in 1810. In 1962, the university was re-established under state sponsorship.

The total of 26 buildings are spread across the city, and in recent years there has been an increasing number of settlements in the old town ( old town university , revitalization of important monuments). In addition to the central administration of the university and parts of the Faculty of Law in Kapitelgasse , the Catholic Faculty and the Salzburg University Library in the Old University, departments of the Faculty of Law and the Humanities are also located in the Old Residence and the House of Social Sciences at 42 Rudolfskai. In addition, in the Nonntal district there is the Unipark Nonntal of the Faculty of Culture and Social Sciences with over 5500 students as well as the central building of the Faculty of Natural Sciences in Freisaal with the Botanical Garden of the University of Salzburg and the Salzburg Pharmacist Garden .

With over 16,500 students and 2,900 employees, the university is the largest educational institution in the city and state of Salzburg . The proportion of women among the students is around 60%, the proportion of foreigners around 30% (66% of them from Germany due to the proximity to the border ).

On July 23, 1622 Albert III. Keuslin appointed the first Rector Magnificus of the Benedictine University of Salzburg. On October 5, Emperor Ferdinand II elevated the Benedictine grammar school in Salzburg to a university and on October 8, 1622 the university was officially opened by its founder, the Archbishop of Salzburg Paris Count von Lodron . At that time, a group of Salzburg, Swiss, South German and Austrian Benedictine monasteries took over the building and maintenance of the university. They sent professors and their students there. As early as the first half of the 17th century, theological and philosophical lectures as well as legal and medical lectures were held. In 1718 Abbot Rupert Neß von Ottobeuren took over the chairmanship of the university.

Sundial fresco at the Old University

In 1810, after Salzburg was incorporated into the Kingdom of Bavaria , the university was dissolved and a lyceum (with theological and philosophical content) and a medical school were built in its place . The theological section of the Lyceum was raised again to the rank of a university faculty in 1850 (Salzburg has been part of Austria again since 1816), and the Lyceum was dissolved. The structure of the old university is expressed with the sundial fresco by Georg Jung, member of the Sonderbund of Austrian Artists , on the south facade of the old university building: The Madonna (from the miraculous image of Maria Plain ) acts as the patron saint of Salzburg and hovers over the three faculties of theology, Philosophy and Jurisprudence.

During the First World War , the Salzburg University Association tried in vain to move the Franz Joseph University from Czernowitz to Salzburg. It was not until 1962, around 150 years after it was closed, that the University of Salzburg was re-founded. 1964 was the year in which the inauguration of the first rector and the resumption of study at the Faculty of Philosophy took place. It was later gradually expanded to include today's four faculties: Catholic theology, law, cultural and social sciences and natural sciences.

The elimination of tuition fees and entrance tests resulted in a sharp increase in the number of students from 13,599 in the 2006/07 winter semester to 15,722 in the 2009/10 winter semester. This particularly affected the subjects of psychology and communication studies , the latter lectures of which had to be held repeatedly in external event halls. Since the proportion of students from Germany was over 40%, in the winter semester 2010/11 - in accordance with the other Austrian universities - an entry restriction and an entrance test for the fields of communication science and psychology were introduced.

In spring 2014 the university received the HR Excellence in Research Award from the European Commission , which is presented for the implementation of the European Charter for Researchers, the Code of Conduct for the recruitment of researchers and for the commitment to the realization of attractive working conditions. The aim of the initiative is to identify and reward institutions that offer fair and transparent recruitment procedures and good career prospects and thus promote the mobility of researchers in Europe . 206 institutions across the EU received the HR Excellence in Research Award; in Austria these are, in addition to the University of Salzburg, the FWF Science Fund , the Medical University of Graz and the University of Natural Resources and Life Sciences, Vienna .

The university maintains numerous Erasmus partnerships with universities in other European countries (European Union, Iceland , Norway , Liechtenstein , Turkey and Switzerland - currently suspended). In 2013 the University of Salzburg was voted the most popular and attractive university in Austria by Erasmus students; The university is one of the ten most popular universities for this group of students across Europe. In addition, there are joint study and exchange programs with partner universities around the world, international summer schools together with other universities and exchange opportunities in the International Student Exchange Program (ISEP). There are also numerous opportunities for academic staff to undertake short and long-term teaching and research stays abroad. The University of Salzburg currently has 400 cooperation agreements with around 230 universities worldwide.

The Media & Communication Management Program (MCM) of the Sino-Austrian Center for Media & Communication Management has existed together with the Fudan University in Shanghai since 2004 . The core of the partnership is a reciprocal student exchange between master’s students from the Communication Science Department in Salzburg and the Fudan University Journalism School in Shanghai as well as the Beijing Foreign Studies University in Beijing and the Nanjing Normal University in Nanjing . Since 2007, joint research projects and conferences have been carried out by the partners and there are exchange programs at employee level and for doctoral students . In January 2015, the joint event Shanghai-Salzburg Seminar Series (SSSS) of both institutes took place for the first time in Salzburg, under the umbrella of Internet studies there were lectures and workshops on the topics of digital economy , social media , eParticipation and culture & values . A new edition of the Shanghai-Salzburg Seminar Series is planned for 2016 in Shanghai.

The university does not have an explicit main building. Since it emerged from the old Benedictine university, today's theological faculty, the newer departments were primarily created in the Nonntal district south of the old town. Since the 1980s, attempts have been made to relocate university life more to the city center (old town university ) . For this purpose, historical old buildings in public ownership, which have to be preserved for monument protection reasons, are gradually being adapted for university purposes. It also counteracted the threat of inner- city ​​evacuation in Salzburg . Today, the university is spread over a large number of locations, and only the four faculties each have a representative main building. The adaptations of the old town as well as the new buildings include several contributions to modern architecture that will be integrated into the UNESCO World Heritage Historic Center of the City of Salzburg . 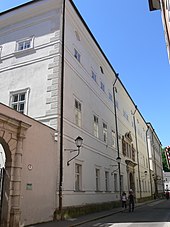 The Rector of the University of Salzburg was the Austrian theologian Heinrich Schmidinger from 2001 to the end of September 2019 , who also chaired the Austrian University Conference between 2011 and 2015 . On February 21, 2019, the German internist Hendrik Lehnert was elected Rector by the University Council for the following term of office (October 1, 2019 to September 30, 2024). Heinrich Schmidinger had not applied for this term.

The administration is now located in the three chapter houses in Kapitelgasse in the old town . The large university auditorium ( Mozartaula ) on Max-Reinhardt-Platz and the library auditorium in the university library in Hofstallgasse function as university ballrooms .

According to the university's organizational plan, the University of Salzburg today consists of four faculties : The Catholic-Theological Faculty (Dean: Alois Halbmayr ), the Law Faculty (Dean: Michael Rainer ), the Faculty of Culture and Social Sciences (Dean: Martin Knoll ) and the Faculty of Natural Sciences (Dean: Arne Bathke ). The four faculties are subdivided into 30 departments, there are also three inter-faculty departments and the School of Education as the central facility for teaching training . This structure replaces the old division of the faculties into institutes. Some of the earlier institutes have been continued as departments since 2004, others have been merged as a new department.

In addition to the departments, there are special institutions and focal points as further organizational units for research and teaching tasks:

Other institutions and university-related organizations:

The student body at the University of Salzburg represents the students on three different levels. It also offers students help with an advice center and publishes the Uni: Press magazine every quarter.

The university student body is the most important collegial body of the student body at the University of Salzburg and is re-elected every two years, most recently in May 2019. The current coalition since July 1, 2019 is between the Greens and Alternative Students (GRAS), the Association of Socialist Students inside in Austria (VSStÖ) and the list of critical & independent students (LUKS), which together hold 10 of the 15 seats. The chairwoman of the ÖH Uni Salzburg has been Keya Baier from GRAS since July 1, 2019 , the first deputy chairwoman is Hande Armagan (VSStÖ), the second deputy is Raphaela Maier from LUKS.

The 15 mandates of the university representatives have been filled as follows since the last election:

At the level of the faculty and study representatives, there is a choice of persons, but not a list.

The ÖH advisory center helps with matters relating to the study department as well as with official matters (study grant authority, tax office, etc.). There are answers and assistance to all questions and concerns about studying such as B. Choice of study, registration / continuation, change of study, tuition fees and intervenes - if necessary - with the appropriate offices. The ÖH advisory center also offers free legal advice on tenancy law as well as labor and social law. The advice center is located in the new Unipark Nonntal (Erzabt-Klotz-Straße 1). Organizationally, the advice center is part of the ÖH university representation. Elba Frank has been the head of the advice center since October 1, 2017.

Rectors of the newly founded University of Salzburg