As a teacher training scientific and practical school training is considered by teachers to qualification for the teaching profession in schools should lead. Similar to other courses of study (such as medical studies), the scientific foundations are laid in a first phase at a university or an equivalent scientific college . In a second phase, school-related, so-called “practical school” training follows, which takes place in study seminars and in connection with schools. The training phases are usually concluded with the first (scientific) and the second (practical school) state examination . In Lower Saxony there has been a special regulation according to §§ 8 and 13 paragraph 1 NLVO education since 2010. The length of the teacher training course and its didactic and content design depends on the type of school and grade chosen.

In Germany , content- related specialist studies, subject didactics and educational science components are coupled with one another and supplemented by practical components in the form of school internships. The proportions of specialist and educational sciences vary depending on the country and the type of school envisaged. The teacher training course usually contains at least two subjects and can - depending on the country or university - as an undergraduate course (with basic and main courses), which concludes with the first state examination , or as a tiered course (with a bachelor's and master’s degree) to be completed. In some countries no further subject has to be studied for art or music, sometimes also for religious studies . In special education , as a rule, no subject is studied, but one or two special education subjects (e.g. education for the visually impaired or pedagogy of educational assistance) are studied.

More information on the individual subjects can be found under the articles on the specialist studies, e.g. B. Mathematics studies and physics studies .

In Bavaria , the possible subject combinations are regulated in detail in the Teaching Examination Regulations I (LPO I).

In Brandenburg , according to the teaching qualification examination regulations (LPO), only the subjects history and civic education, lifestyle-ethics-religion (LER), as well as Russian and Polish cannot be combined with each other, and in the teaching profession for elementary schools and secondary level I also not the subjects mathematics and computer science as well as LER and history. With the new version of the Brandenburg Teacher Education Act, which is due to come into force in the summer of 2013, the intention is, however, to introduce a core subject binding analogy to that of North Rhine-Westphalia in the individual teaching posts.

In North Rhine-Westphalia , the Teacher Training Access Ordinance (LZV) issued by the Rüttgers cabinet in 2009 introduced a core subject binding: One of the selected subjects in the teaching profession for secondary and secondary schools must be one of the core subjects biology, chemistry, German, English, history, mathematics, Be physics, Protestant religion, Catholic religion or social sciences. The Ministry of Education has declared the subjects of biology, chemistry, German, English, French, history, Latin, mathematics, physics, Protestant religious studies, Catholic religious studies and Spanish to be core subjects for teacher training courses for grammar schools and comprehensive schools. Certain combinations are also excluded for teaching at vocational schools. In contrast, no second subject is required for teaching music and art. The red-green state government of the Kraft I cabinet retained this regulation, so that the core subject binding came into force for the first time in the 2011 winter semester.

The Saarland regulates the possible subject combinations mainly through the examination regulations and the study regulations of the universities in the state. Requirements mainly concern the teaching position at vocational schools, for which a combination of a vocational and a general education subject is prescribed. In addition, the subject of computer science for grammar schools and comprehensive schools usually has to be combined with the subject of mathematics.

The following parts of this section seem Since October 2011, out of date to be : The information on the introduction of testing for approval appear to be obsolete: "At other universities is currently discussed and researched to what extent such aptitude tests are possible," and a few sentences after ". .. at the same time reported that such a test no later than 2011 for all student teachers in Baden-Württemberg mandatory for university admission will be required . " This seems out of date.
Please help to research and insert the missing information .

Recently, some universities have started to introduce special psychological aptitude tests for student teachers , such as the University of Kassel and the Leuphana University of Lüneburg . At other universities, discussions and research are currently underway as to what extent such aptitude tests are possible and how they should be designed. There are also more and more advocates of aptitude tests for prospective student teachers among educational politicians. In June 2009, the Baden-Württemberg Ministry of Science and Culture made a voluntary orientation test available on the Internet and at the same time announced that such a test will be compulsory for all teaching students in Baden-Württemberg for university admission from 2011 at the latest.

A compulsory phoniatric report for prospective teachers to determine whether they are vocal and speaking technically capable of practicing the teaching profession on a permanent basis, as has been demanded time and again, for example by the German Society for Speech Science and Speech Education , has not yet been implemented, although it has been studies according to which 40 percent of student teachers have voice abnormalities. Only the University of Leipzig now requires a corresponding report. In addition, Saarland University in Saarbrücken has introduced a language aptitude test (SET) for candidate teachers. The fact that most teacher training courses do not take into account the vocal stress of the teaching profession at all is astonishing in view of the fact that voice disorders have long been considered a typical teaching disease.

In most countries, as part of the Bologna Process, a switch to the tiered study program is currently being made, although the Bachelor's degree is a degree that is basically a professional qualification, but not sufficient for admission to preparatory service. In Bavaria, according to the Bavarian Higher Education Act, the first state examination for a teaching post is also considered a professional qualification. In some countries, the first state examination has since been abolished and replaced by the Master of Education . In Saxony, on the other hand, where university teacher training was switched to a Bachelor / Master model in 2006, the first state examination has been returned to since 2012, with the modularisation typical of Bologna courses being retained. 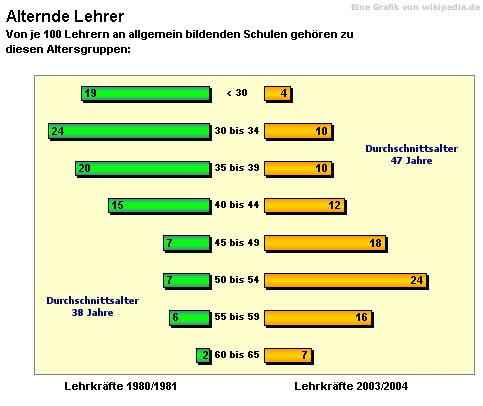 In the 2017/2018 winter semester, around 236,000 students studied in a teacher training course. This corresponds to almost 8 percent of all students, the number of which the Federal Statistical Office puts at around 2.84 million. Almost 7% of the first-year students (around 437,000 in total) opted for a teaching degree. The humanities were the most popular among the "teaching posts", followed by mathematics and natural sciences at some distance.

Nevertheless (as of 2018) there is a shortage of teachers. According to a forecast by Die Zeit , there will be a shortage of around 200,000 teachers by 2025. According to a report by the Standing Conference, there are around 787,000 full-time teachers in Germany in 2015 and an average annual need for recruitment of around 25,000 teachers by 2025. Mathematically, enough teachers would then be available, but not necessarily for the desired subjects or school types. There is also a regional imbalance; the shortage is particularly severe in the eastern federal states.

For the situation in the GDR see the articles Education system in the GDR , Diplomlehrer and lower school teachers .

A teacher training course for the teaching profession at higher schools serves "the technical, didactic and pedagogical-scientific or scientific-artistic pre-vocational training including practical school training". The teacher students for elementary and secondary schools study at universities of teacher education in a practice-oriented manner and can teach immediately after acquiring the Bachelor of Education . The teacher training students at the secondary level of vocational education also study at universities of teacher education in an extra-occupational course. The teaching students for grammar schools, on the other hand, study at universities and have a larger proportion of specialist subjects in their studies. The compulsory introduction to the practical teaching position for grammar school teachers only lasts one year in Austria and is similar to the German legal clerkship.

In June 2013 a fundamental reform of the teacher training courses was decided, with which the previous diploma courses were transferred to the Bachelor / Master system. The bachelor's degree has a standard study time of eight semesters and comprises 240 ECTS points, the master's degree will last at least two semesters and comprise 120 ECTS. Likewise, training will no longer be structured according to school types, but rather according to school levels. New courses were introduced at the University of Salzburg and the Mozarteum Salzburg in the 2013 winter semester.

In Switzerland , “teachers for kindergarten and primary school” are trained at universities of teacher education . It is also possible to study to become a secondary school teacher there. At some universities of teacher education, a "teaching diploma for maturity schools" can also be obtained. Overall, like the entire education system in Switzerland, the teaching degree varies greatly from canton to canton. As of autumn 2009, teaching courses will be standardized throughout Switzerland, so that only federally recognized courses based on the Bologna system will be offered.

Other countries in Europe

In many other European countries, many future teachers gain qualifications through specialist studies that are not focused on taking up the teaching profession.

To the study decision