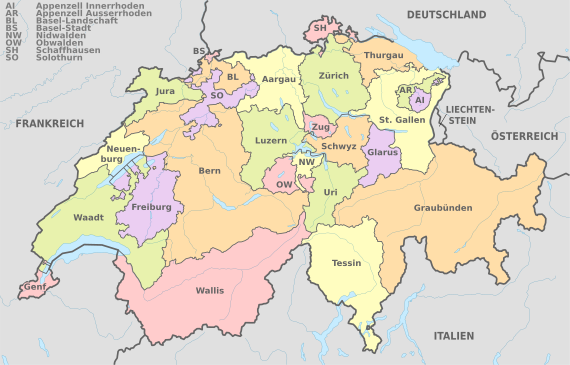 The 26 cantons ( French cantons, Italian cantoni, Romansh chantuns, in German Switzerland traditionally also state , in the plural objects , respectively, in the Romandie also état called) are the constituent states of the Swiss Confederation . The term canton was first used in 1475 in a Freiburg file.

All government areas that are not assigned to the Confederation by the Swiss Federal Constitution or regulated by a federal law belong to the competence of the cantons, for example cantonal state and administrative organization law, school system, social assistance, building law, police, notarial system, cantonal and communal tax law, to a large extent also health care, planning law, court constitution and others. Both the federal government and the cantons have competencies in many areas. Cantons, like the German states, are derivative subjects of international law and, within their competences, can conclude state treaties with one another (so-called concordats ) or with foreign states.

Word origin and other designations

The term "canton" for a member of the Confederation is first recorded in 1475 or 1467 from Friborg. Since cantone in Northern Italy has stood for "part of the country" since the 11th century, Walther von Wartburg assumes that the word was brought to what is now western Switzerland by Lombard merchants, where it was then adopted as a canton in German and as canton in French. Italian cantone is an enlarged form of canto, which means "corner, edge, angle, piece, part". Canto, on the other hand, comes from the Latin canthus "iron wheel tire", which in turn was perhaps originally a Celtic word.

Before and next to the word canton - this became more and more popular in German-speaking Switzerland from the 17th century and became official in 1798 - there were and are several other names for the members of the Swiss Confederation.

With the Helvetic Republic (1798–1803) the term canton got a heavier use. In the newly created unitary state, however, the cantons were mere administrative districts without rights of autonomy. The demarcation was changed in order to create cantons of approximately the same size and to smash the old order. This also resulted in the short-lived cantons of Säntis , Linth , Waldstätte , Oberland , Baden , Lugano and Bellinzona , and from 1802 the canton of Fricktal for one year .

When a federal state was founded in 1848 , the sovereignty of the cantons was restricted, and areas such as foreign policy, customs, currency and postal services came under federal authority. With industrialization and economic growth, state life became increasingly complex, which made further centralization necessary and led to the unification of substantive law in areas such as civil law, criminal law, commercial and economic law. Today the areas in which the cantons can really still legislate autonomously are fairly limited. There is increasing talk of «enforcement federalism».

The enlargement of Switzerland through the inclusion of further areas as cantons ended in 1815, since then there have only been changes to the area between the cantons and in 1978 the canton of Jura was founded by splitting off from the canton of Bern .

After the end of the Habsburg monarchy , efforts were made to include the Austrian state of Vorarlberg as a canton in Switzerland. The referendum in Vorarlberg in 1919 showed that a majority of a good 80 percent of Vorarlbergers was in favor of joining Switzerland. However, the project failed because of the hesitant policy of the (provisional) Vorarlberg state assembly and the Swiss Federal Council , which did not want to imbalance the carefully balanced relationship between the languages ​​of Switzerland and the denominations in Switzerland by adding an additional canton with German-speaking Catholics , as well as the peace treaties with the Entente .

In 2010, Dominique Baettig , a member of the right-wing Swiss People's Party (SVP) in the National Council , called for a legal framework to allow regions bordering Switzerland to join Switzerland as additional cantons. The Federal Council rejected this, as such a decree would constitute an unfriendly political act that neighboring states could perceive as a provocation.

Today the number of cantons is given as 26, sometimes as 23. The reason is that six cantons ( Obwalden , Nidwalden , Appenzell Innerrhoden , Appenzell Ausserrhoden , Basel-Stadt and Basel-Landschaft ) are still sometimes referred to as half-cantons for historical reasons . Since the complete revision of the Federal Constitution in 1999, they have been regarded as cantons with half a professional vote. This distinction is only relevant for the composition of the Council of States and for the number of estates and has no influence on internal autonomy.

The official order of the cantons (see list below ), as it appears in Article 1 of the Federal Constitution, goes back to the time before the founding of the federal state. The three suburbs from the period between 1815 and 1848 are named first , followed by the other cantons in the order in which they joined.

1 Population with different data (based on data from both the cantons and the federal government)
2Registered foreigners without Swiss citizenship in percent according to the State Secretariat for Migration SEM (status: 2015-12-31)
3Unemployment rate according to the State Secretariat for Economic Affairs SECO (status: 2015-12-31)
4th Inhabitants per square kilometer (population density)
5The cantonal constitution does not define a capital. The seat of the government and parliament of the canton of Appenzell Ausserrhoden is in Herisau ; The judiciary and police are based in Trogen .
6th The number of parish holdings is based on several data.
7thAccession of the original cantons in 1291, provided that the federal letter of 1291 is accepted as the foundation of Switzerland.

The two-letter abbreviations Canton ( abbreviations ) are common, they include for vehicle license plates are required and in the ISO 3166-2: CH (with the prefix "CH-", for example, CH-SZ for the canton of Schwyz).

Canton names in the Swiss official languages ​​and in dialect

The names of the cantons are given in the spelling and the official order as they can be found in Article 1 of the Federal Constitution. The names in the respective official languages ​​in the official full name form are highlighted. The names in Swiss German are not binding, as there is no official spelling for them. In the following, the dialect wording is given for wholly or partially German-speaking cantons that applies in the respective regional dialect.

*)The spelling with tz is used by the Guide du Typographe romand and is therefore frequently encountered (so that the «z» is not pronounced as a voiced s without the initial t, as it should be without a t according to French pronunciation rules).

Inland cantons are those cantons that do not border on other countries. Switzerland has eleven inland cantons: Appenzell Ausserrhoden, Appenzell Innerrhoden, Bern (since the Bern district of Laufen changed to the canton of Basel-Landschaft in 1994), Freiburg, Glarus, Lucerne, Nidwalden, Obwalden, Schwyz, Uri and Zug. Nidwalden and Obwalden are surrounded exclusively by inland cantons.

"Canton" is used jokingly for other countries and organizations.