Glarus ( abbreviation GL ; Swiss German Glaris, French Glaris, Italian Glarona, Rhaeto-Romanic Glaruna ? / I ) is a canton in German-speaking Switzerland and is one of the regions of northeast and southeastern Switzerland . The main town is the city of the same name, Glarus , the most populous place is the municipality of Glarus Nord .

View of the Glarnerland north of Niederurnen in south direction

The canton includes the catchment area of ​​the Linth to the Walensee and the Linth plain west of the Linth to Bilten and the Kerenzerberg . The Glarnerland is characterized by large differences in altitude: from the flat valley floor at an altitude of 414 meters, the terrain rises to over 3600 meters ( Tödi , 3614  m above sea level ). These contrasts are reflected in the climate: within a few kilometers it changes from mild on Lake Walen with its southern flora to high alpine on the glaciated mountain peaks; and when the foehn blows through the valley, temperature records can be measured. The valley is only open to the north to the Lin Plain.

The 685 square kilometer canton roughly corresponds to the catchment area of ​​the Linth. The Sernf or Kleintal is the only side valley that offers space for village settlements. The Klöntal , the most important western tributary valley, is, as Carl Spitteler praises, with its mountain lake "as beautiful as no dream would guess".

The most visible human intervention in taming nature is the imposing Linth work , which shapes the face of the entire region. The Linth correction was started in 1807 as Switzerland's first national work . The Linth is directed into the Walensee and its course is channeled into the Zürichsee . Before that, it flowed sluggishly towards Lake Zurich, damming the outflow from the Walensee more and more and swamping the Lint plain.

The official language in the canton of Glarus is German . 83.6 percent of the population are German and 6.8 percent Italian .

The Glarus dialect is not uniform, but what the Glarner idioms have in common is the melodious, singing language. Glarus German is one of the dialects of the Highest Alemannic .

The federal census from 2000 showed the following denomination picture:

The Evangelical Reformed Church of the Canton of Glarus and the Roman Catholic Church are state-recognized corporations under public law. The two churches organize their internal affairs independently and issue a constitution that requires the approval of the district administrator.

Glarner Landsgemeinde 2009 - Those entitled to vote stand “in the ring” and hold up their voting cards while spectators watch in the stands.

The current constitution of the Canton of Glarus was adopted on May 1, 1988 by the Landsgemeinde and has since been revised several times. 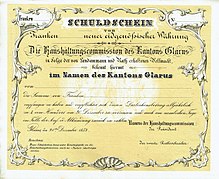 Borrower's note of the Canton of Glarus dated December 20, 1852, blank

The Landsgemeinde is the assembly of residents entitled to vote and is therefore the highest body of the canton. The ordinary Landsgemeinde takes place every year on the first Sunday in May and is led by the Landammann . The basis for the negotiations are the submissions of the District Administrator (parliament) published in the Memorial or in the Official Journal; other items may not be advised. Every participant entitled to vote has the right to submit requests for support, amendment, rejection, postponement or rejection of the submissions.

In contrast to the canton of Appenzell Innerrhoden , the elections for the government council and the council of states do not take place in the rural community, but in a secret ballot at the ballot box.

It is the supreme supervisory authority over the government, administration and the courts. He advises the constitution and legislation and the other resolutions for the attention of the Landsgemeinde and issues ordinances, administrative and financial decisions on his own authority. It also decides on basic or generally binding planning.

The last district elections took place on June 10, 2018 and resulted in the following distribution of seats:

The government council is the government of the canton. Since 2006, it has consisted of five (previously seven) members who are elected by the people at the ballot box in a single constituency in the majority voting system for four years each. Its President ( Landammann ) and Vice President (State Governor) are each elected by the Landsgemeinde for two years.

Since the elections on March 4, 2018, the government council has been composed as follows:

The canton of Glarus has a cantonal arbitration authority that has the task of bringing about an amicable settlement between the parties in civil law disputes before court proceedings. Introduced by the Landsgemeinde resolution of 2017, it replaced one cantonal arbitration authority each for tenancies and equality, and three communal mediation offices.

The judges are elected by the Landsgemeinde for a four-year term. The prosecution takes place by the public prosecutor and the youth prosecutor.

With the Landsgemeinde resolution of May 7, 2006, the Glarus local communities, school communities, welfare communities and Tagwen (civic communities) were amalgamated on January 1, 2011 (see Glarus community reform ), so that only three communities have existed since then . This resolution was clearly confirmed on November 25, 2007 in an extraordinary rural community.

In addition to these three unified congregations, there are also the parishes of the Evangelical Reformed Regional Church of the Canton of Glarus and the Roman Catholic Church, which are also recognized under public law .

The canton of Glarus has no division into districts. However, the Federal Statistical Office (FSO) lists the entire canton as one district under FSO no. : 0800.

See also : Municipalities of the Canton of Glarus

With the state community resolution of May 6, 2007, the voting age was set at 16. In a hard-fought debate and with a tight result, the JUSO Glarus proposal prevailed. Since then, in the canton of Glarus - as the first and so far only Swiss canton - citizens aged 16 and over have been able to exercise the right to vote and be elected in cantonal matters. The passive right to vote remains at 18 years of age.

Representation in the Federal Assembly

The Glarnerland is mostly served by the railway lines Rapperswil SG –Glarus – Schwanden and Zurich - Ziegelbrücke –Linthal. The hourly regional trains also serve Ziegelbrücke, the most important transport hub in the area. Since the timetable change on December 14, 2014, the S25 of the Zurich S-Bahn connects Glarus and Zurich every hour without changing in 58 minutes. A progress that the commuter club fought for for several years. The concessionaires for bus transport are the Swiss Federal Railways , the Swiss Post Bus Service and, in the hinterland, the Sernftal (AS) car company as the successor to the Sernftalbahn, which was closed in 1969 . In 2019, the degree of motorization (passenger cars per 1000 inhabitants) was 588.

In agriculture , livestock and especially dairy farming predominate . However, the main branch of the economy is industry, especially the textile industry , machine and apparatus construction , wood processing and the building materials industry . The canton of Glarus was one of the first and the most industrialized areas in Switzerland. In addition, electricity generation through hydropower plants and tourism are important.

Tourism is of  great importance - especially in the towns of Braunwald , Elm and Filzbach - the service sector is growing steadily and the infrastructure in the valley is very well developed.

The school system in the canton of Glarus is well developed: Kindergarten, elementary school (some introductory classes , special and auxiliary schools) with upper, secondary and secondary schools ; There is also the working year, the voluntary tenth school year, the annual housekeeping course and the integration class.

At the district school Glarus can Swiss maturity attained and the secondary school attended. There are also adult education courses.

A vocational school is run in Ziegelbrücke, and the commercial school in Glarus, along with a nursing school. Around 130 professions can be learned in around 400 training companies in the canton.

The rich offerings from the State Archives and, above all, the modern Glarus State Library serve not only those who are hungry for education, but also those interested in history and culture or simply for reading, listening and viewing pleasure. With the map collection of Walter Blumer and the cartography library of Arthur Dürst, the state library (canton library) has little-known but historically interesting research material .

Glarus has a renowned art house built as such. The Tschudi Gallery in Glarus and various private galleries also repeatedly show attractions from the field of performing arts, which are practiced by numerous artists in the canton.

The Braunwald Music Week is the most traditional of its kind in Europe. It not only invites the participants to listen, but also to actively participate. The Glarus Music School, together with numerous associations and groups, contributes to musical life. And the Modern Music School - Glarnerland complements the traditional training offer with a program specializing in modern styles.

The Glarner Konzert and Theatergesellschaft as well as the Holenstein Glarus cultural and association center (especially in alternative culture) are also active.

In terms of sport, there is an offer in various sports centers and of course the nearby mountains and lakes attract local activity. Incidentally, the first Swiss Alpine Club hut in Switzerland was built in the canton of Glarus, on the Tödi , and was the cradle of Swiss skiing in the Glarnerland.

→ Main article : History of the Canton of Glarus

→ Main article : Flag and coat of arms of the Canton of Glarus

The Glarus coat of arms is the only coat of arms in Switzerland to show a person: Saint Fridolin with a walking stick and Bible. According to legend, Fridolin was an Irish messenger of faith who lived at the beginning of the 6th century and through whose influence the inhabitants of the Glarnerland became Christians . In church representations he is accompanied by a skeleton.

The legend reports that Fridolin, who was given large parts of the Glarnerland by the dying, rich Ursus, took him out of the grave for help in an inheritance dispute with his brother Landolf. When Landolf saw his brother, who had already decayed, appear in court, he was so shocked and ashamed that he also gave Fridolin his part of the Glarus region. In this way the affiliation of the Glarnerland to the Säckingen monastery founded by Fridolin in Germany was declared, and Fridolin is considered the patron saint of inheritance sneaking.