Schwyz ([ ʃviːts ], Swiss German Schwyz , French Schwytz or Schwyz , Italian Svitto , Romansh Sviz ? / I ) is a canton in German-speaking Switzerland and is part of the greater Central Switzerland region and the metropolitan region of Zurich . The main town is the municipality of the same name Schwyz , the most populous place is Freienbach .

Logo of the cantonal administration (1995)

The canton is named after its capital, Schwyz .

Since the canton of Schwyz was the most important of the three original Swiss cantons , its name was soon generalized to the entire Swiss Confederation . The form Switzerland , which was transferred into New High German (with the typically non-Alemannic diphthong ), subsequently became the common name for the state throughout the German-speaking area; the native form (as in Middle High German without diphthong), however, was adopted into French as Suisse . The Schwyzer and Swiss flags , on the other hand, were created independently of each other.

The canton of Schwyz is located in central Switzerland between Lake Zug , Lake Lucerne and Lake Zurich and borders the seven cantons of Uri , Glarus , St. Gallen , Zurich , Zug , Lucerne and Nidwalden . Most of it belongs to the Schwyz Pre-Alps , part of the Central Switzerland Pre-Alps . A small part in the south-east belongs to the Glarus Alps (or, according to another division, to the Schwyzer Alps ). The summit of Bös Fulen ( 2801.8  m ), the highest point in the canton, is located on the canton border . Less than a kilometer southwest of Bös Fulen is the Grisset ( 2721  m , also called Guet Fulen ), the highest peak that lies entirely in the canton of Schwyz.

Official language and other languages

The German dialects widespread in the canton are, with the exception of the Höfe district , whose dialect is close to Zurich German , to Höchst Alemannic . Middle High German long / iː /, / üː / and / uː / have also been preserved in the hiat and in the wording and not only in the interior of the word as in High Alemannic , so it means something like schnyyä [ʃniːæ] «snow», nüü [nyː] « new », buuä [buːæ] « build ». Schwyzerisch differs from the neighboring High Alemannic dialects in the south and west in that it lacks rounding and rounding , for example Baum [bæʊ̯m] «tree» and Müüs [myːs] «mice», not Boüm [bɔʏ̯m] and Myys [miːs] like in Uri. Schwyzerdeutsch differs from the neighboring High Alemannic in the east by the stretching of Middle High German / a /, / æ / and / ë / in open syllables, so like in Uri one says Naasä [nɑːsæ] "Nase", not Nasä [nɑsæ] as in Glarus. Characteristic for parts of the Schwyz dialect is the expansion of long (also secondary elongated and secondary dull) / eː /, / oː / and / öː / to / ei /, / ou / and / öü /, for example Schnei [ʃneɪ̯] «snow », Schöün [ʃøʏ̯n] « beautiful »and Broud [broʊ̯d] « bread ». The dulling of Old High German / aː / that has occurred in almost the entire German-speaking area is only known in the canton of Schwyz in its northern regions; so in the district of Höfe Òòbig [ɔːbɪg] and in conjunction with the aforementioned expansion in the districts of Einsiedeln and March Oubig [ɔʊ̯bɪg] , otherwise Aabet [ɑːbət] «evening» as well as in the other highest Alemannic neighborhood.

Like all cantons in Central Switzerland, the canton of Schwyz is traditionally Catholic. In 2018, 60.2 percent (95,794 inhabitants) of the entire Schwyz resident population were members of the Roman Catholic Church and 11.6 percent (18,390 inhabitants) belonged to the Evangelical Reformed Church (100 percent: 159,165 Residents).

Since the 2000 census , there are no more precise numbers of members of other religious communities (besides the two regional churches ) for the total population of the Canton of Schwyz. However, the Federal Statistical Office carries out sample surveys in which other religious communities in the canton are also recorded. In the 2017 sample survey, almost a third of respondents aged 15 and over in the canton of Schwyz stated that they did not belong to either of the two regional churches. In addition, according to the survey, the religious affiliation of the various population groups differs significantly, depending on nationality or origin:

The canton of Schwyz was one of the five inner Catholic mountain cantons that took part in the two Kappel Wars . As a result of the second Kappel peace treaty, no members of other denominations were allowed to live in the canton of Schwyz. It was not until the Federal Constitution of the Swiss Confederation of September 12, 1848 that freedom of religion and freedom of residence was guaranteed.

With the “Constitution of the Swiss Confederation Schwyz” of June 11, 1876, complete religious freedom was introduced , including for non-Christian religions.

The Catholic Church remained the only recognized religious community (state church) for the Canton of Schwyz until 1957. On September 27, 1992, the citizens of the Canton of Schwyz agreed to a reorganization of the relationship between churches and state. They spoke out in favor of a separation of tasks and the creation of two denominational cantonal churches. Both these and the parishes are independent of the canton and the parishes in terms of financial and tax law.

Today (as of 2013) 18,683 Reformed people live in the canton of Schwyz, which corresponds to around twelve percent of the population. It is 15.9 percent in Ausserschwyz , which is oriented towards Zurich and which had the first Reformed settlers as early as 1830. In Innerschwyz only 7.7 percent of the population is Reformed. The first Evangelical Reformed parish was founded in the March district in 1868. The Siebnen Church was consecrated in 1878. In 1886 the first reformed pastor was employed in Brunnen. This development was significantly supported by the Protestant Church Aid Association of the Canton of Zurich, which saw its task in promoting Protestant religious life in the diaspora .

Free churches and other Christian communities

The current cantonal constitution is dated November 24, 2010 and was adopted in the referendum on May 15, 2011. It replaced the previous, often amended constitution of 1898.

The legislative body ( legislature ) is the Cantonal Council with 100 members. These are elected by the people for four years in accordance with proportional representation, with each municipality forming an electoral district.

Constitutional amendments, legislative enactments or amendments, as well as spending resolutions on one-off expenditures of more than five million francs or annually recurring expenditures of more than 500,000 francs that have been approved by less than three quarters of the cantonal councils taking part in the final vote are subject to the Popular vote ( compulsory referendum ), the other legislative enactments and amendments if requested by 1,000 voters ( optional referendum ). The people themselves can propose constitutional and legal amendments if 2,000 eligible voters support a proposal to that effect ( popular initiative ).

In the elections to the Cantonal Council, the parties received the following number of seats:

The highest executive or executive body ( executive ) is the government council , the seven members of which are directly elected by the people according to the majority election for a fixed term of four years. The Landammann holds the presidency for two years, his deputy is the provincial governor .

On July 1, 2008, the government council revised the executive order on the tasks and structure of the departments and the state chancellery and put it into effect. On March 28, 2007, the Cantonal Council approved an amendment to the Organizational Ordinance, paving the way for a new departmental structure.

The government council is supported by the state clerk Mathias Brun (independent).

The law ( judicial ) is in second instance at right Cantonal level by the Cantonal and the administrative court applied. The district courts , the cantonal criminal and juvenile court and the compulsory measures court form the first legal instance. The mediators located at the municipal level (called justice of the peace in other cantons) are upstream of the district courts as arbitration authorities.

The Roman Catholic and Protestant Reformed parishes , which each form within the respective cantonal church , are also recognized under public law .

The traditional corporations are also recognized under public law. In contrast to many other cantons, there are no civil parishes in the canton of Schwyz.

See also : Municipalities of the Canton of Schwyz

→ Main article : History of the Canton of Schwyz

→ Main article : Municipalities of the Canton of Schwyz

District coat of arms of the Canton of Schwyz; Schwyz, Gersau, March, Einsiedeln, Küssnacht and Höfe

The largest municipalities as of December 31, 2018 are listed below: 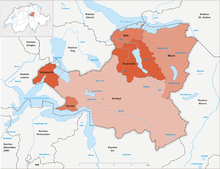 Districts of the Canton of Schwyz

The canton of Schwyz is divided into 6 districts and 30 communities , with the districts of Einsiedeln , Küssnacht and Gersau each consisting only of the community of the same name.