Basel-Stadt ( abbreviation BS ; French Bâle-Ville , Italian Basilea Città , Rhaeto-Romanic Basilea-Citad ? / I ) is a canton in German-speaking Switzerland . The main town and at the same time the most populous place is Basel . The canton is part of the economic region of northwestern Switzerland and the cross-border metropolitan region of Basel .

The city canton is the smallest in area and at the same time the most densely populated Swiss canton and consists of the city ​​of Basel and the political communities of Riehen and Bettingen . The canton of Basel-Stadt borders both Germany and France .

The half-canton of Basel-Stadt is located in the north-west of Switzerland. In terms of area, it is the smallest canton, in terms of population it ranks 15th out of 26. The municipality of Basel is located on the knee of the Rhine , where the Birsig flows into the Rhine and the river changes its direction of flow from west to north. The knee of the Rhine forms the southern end of the Upper Rhine Plain .

→ Main article : Municipalities of the Canton of Basel-Stadt

The community of Kleinhüningen has been incorporated into the city of Basel since 1908 .

All three political communities as of December 31, 2018 are listed below:

However, the Federal Statistical Office (FSO) lists the entire canton as one district under FSO no. : 1200.

The population of the canton of Basel-Stadt is very heterogeneous and reflects the canton's history as an important trading and industrial location. The population development has been declining since the 1980s. The emigration to neighboring municipalities in other cantons and the structural loss of jobs with the change in industrial production are among the important reasons for this. As of December 31, 2018, the population of the canton of Basel-Stadt was 194,766. The population density of 5,264 inhabitants per square kilometer is approximately 26 times the Swiss average (207 inhabitants per square kilometer). The proportion of foreigners (registered residents without Swiss citizenship ) was 35.2 percent on December 31, 2015, while 24.6 percent were registered nationwide. As of December 31, 2015, the unemployment rate was 4.0 percent compared to 3.7 percent at the federal level.

The formerly dominant Protestant population has declined from 85,000 in 1980 to 35,000 at the end of 2010. However, the numbers are to be interpreted differently. With the Protestants, the Catholics, the Jews and the Christian Catholics, the institutional membership of the religious community is counted (publicly recognized communities), with the Muslims, the "others" and the Eastern Church followers (such as Serbian Orthodox or Greek Orthodox) religious affiliation (as of the end of 2010).

The canton in its current boundaries was established in 1833 when today's canton of Basel-Landschaft split off from the then canton of Basel as part of the separation of the cantons . Basel-Stadt had a reunification article in the constitution for a long time, it was only dropped with the total revision in 2006. The constitution of Basel-Landschaft requires independence. In 1969, a vote was taken on reunification; those entitled to vote clearly voted for it in Basel-Stadt and against it in Basel-Landschaft. There was no political chance for reunification. In September 2014, another vote on the merger of the two Basels was carried out. Again there was a tight yes in Basel-Stadt (54.9% yes), while in Basel-Landschaft the merger was clearly rejected (68.3% no). The pragmatic way out of this dilemma is shared administrative units and institutions and the voluntary comparison of laws and regulations.

The voters of the canton of Basel-Stadt approved the current cantonal constitution on October 30, 2005. This came into force on July 13, 2006 and replaced the constitution of December 2, 1889.

3000 voters can submit a formulated (formulated) or general (unformulated) popular initiative that concerns an amendment to the constitution or an amendment, the enactment or repeal of a law or a referendum resolution of the Grand Council.

2,000 people entitled to vote can demand a referendum on a resolution of the Grand Council that concerns the enactment, amendment or repeal of a law or an issue in a certain amount determined by law ( optional referendum ) .

The canton's parliament is called the Grand Council . It comprises 100 members who are each elected for a four-year term of office using proportional representation.

The government council is elected for a four-year term using the majority voting procedure.

In contrast to most of the other cantons, which have a rotating system, the regional council is elected by the people and for the entire four-year legislative period.

See also : List of Government Councilors of the Canton of Basel-Stadt

The highest court in Basel-Stadt is the appellate court . It is also a cantonal administrative court and a cantonal constitutional court and oversees the courts of first instance.

A peculiarity throughout Switzerland is that almost all shops in the municipality of Basel are run by the Canton of Basel-Stadt. This means that the canton's parliament, government and administration are also directly responsible for the municipality. Riehen and Bettingen, however, have independent community bodies . Outside of the cantonal administration, there are some social institutions such as the Basel Citizens Hospital or the civic orphanage , which are traditionally administered by the City of Basel's civic community.

The Evangelical Reformed , Roman Catholic and Christian Catholic Churches as well as the Israelite community are recognized under public law by the constitution . They organize their internal circumstances independently and create a constitution that has to be approved by the government council.

Basel-Stadt now has a heterogeneous multi-party system with fragmented wings on both sides of the political spectrum. In addition to the parties represented in the Basel Grand Council , the cantonal parliament, the Green Alliance , SP , CVP , EPP , FDP , LDP , glp and SVP , other parties as well as individual politicians who are independent from parties are active. The canton of Basel-Stadt is the only canton in German-speaking Switzerland in which the former Liberal Party of Switzerland (LPS, in Basel the Liberal Democratic Party , LDP) still plays a role, where it is considered the party of the « Daig », the traditional Basel elite.

For a long time Basel was a social democratic stronghold. In the 1930s, Social Democrats and Communists together even made up the majority, a time that went down in history as the “red Basel”. During the Cold War , however, the bourgeois forces also dominated Basel. In the present, neither the red-green nor the bourgeois camp can claim an absolute majority. In the 2012 Grand Council election, both camps achieved the same number of seats, with the entry of the right-wing populist “ people's action against too many foreigners and asylum seekers in our home country ” in the cantonal parliament.

The Basel integration model by Thomas Kessler is receiving a lot of attention in politics .

Representative of Basel-Stadt in the Federal Assembly

As a canton, Basel-Stadt sends a representative to the Council of States with half a professional vote :

In the canton of Basel-Stadt, the chemical and pharmaceutical industry and trade are of national importance. As a financial center, Basel still has a certain significance behind Zurich . Economic life is concentrated in the municipality of Basel ( see there for details ).

Basel is very well developed for tourism: Accommodation in every price range, from youth hostels to historically significant luxury hotels such as the Hotel Les Trois Rois , offers numerous accommodation options, and Basel Tourismus , the semi-public organization that promotes tourism in Basel, not only maintains information points, but also offers them also offers a wide range of excursions and other services.

Basel has a wealth of sights, including the old town, the Basel Minster , the St. Chrischona TV tower and numerous newer buildings by important architects. Furthermore, the Basel Zoo , the largest zoological garden in Switzerland, the border triangle Germany-France-Switzerland and the numerous museums or events such as the Basel Carnival attract many visitors.

Basel has also been a household name among art lovers for decades: in addition to the world-famous collections of the Fondation Beyeler , the Tinguely Museum and the Basel Art Museum, the numerous special exhibitions in the museums and of course Art Basel , one of the world's most important art fairs, attracted tens of thousands of visitors to Basel every year .

Basel is the hub of road traffic north-south from France and Germany through Switzerland. The highway A3 of France passes through the northern bypass to the city highway A2 , the so-called East Bypass, which directs traffic from Germany through the city to the south. Outside the city, the two branches then separate again. The A2 continues to the Gotthard or to Bern and the A3 to Zurich . In 2019, the degree of motorization (passenger cars per 1000 inhabitants) was 337.

The binational airport Basel Mulhouse Freiburg (EuroAirport) is located entirely on French territory , but is divided into a French and a Swiss sector. The latter is connected to Switzerland by a customs-related extra-territorial road, a so-called duty - free road, which begins in Basel under the name "Flughafenstrasse". 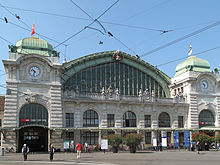 The canton of Basel-Stadt has three international train stations. The Swiss Basel SBB train station and the French Basel SNCF train station are both located in one building, south of the city center on the Grossbasler side. If you want to go from the Swiss train station to the French one, you have to pass a customs border. The Badische Bahnhof, operated by Deutsche Bahn , is located on the Kleinbasel side and is also separate from Switzerland in terms of customs. This station is mainly used by travelers from Germany who have to change between the Upper Rhine Line , Wiesental Line (line S6 of the trinational S-Bahn Basel between Basel SBB - Lörrach - Zell im Wiesental ) and Upper Rhine Railway and have to pass through Swiss territory.

There are also four local train stations. St. Jakob is located on the Bözberg line or Hauenstein line to Muttenz ; so far, however, trains only stop here for major events in St. Jakob-Park . The Dreispitz station on the Jura line (opened in May 2006) is intended to relieve the SBB station of commuter flows, especially in and from the Birsigtal.

The stations of St. Johann on the SNCF route to Mulhouse and Riehen Niederholz and Riehen on the German Wiesental line have a status similar to that of the Badischer Bahnhof . All three stations are located on Swiss territory, but are French or German territory for customs purposes.

Basel is also connected to the rest of Switzerland and neighboring countries via the river Rhine . The Basel shipping company goes up the Rhine to Rheinfelden . Basel is also the home port of various shipping companies, which offer cruises on the Rhine as well as to the Main and the Moselle from here.

In addition, Basel is the home port of Swiss ocean shipping .

An important pillar of the Swiss economy is the Basel Rhine shipping with its Rhine ports Kleinhüningen, St. Johann and Birsfelden.

The inner-city traffic as well as the fine development of the surrounding area take place with an extensive tram network , supplemented by numerous bus lines of the Basler Verkehrs-Betriebe , Baselland Transport AG and Autobus AG Liestal and some other companies.

In the 1990s and again in the 2010s with the school harmonization , the entire public school system was reformed. The two-year kindergarten has been compulsory since August 2005. The official school time, the elementary school, begins with the kindergarten, lasts eleven years and begins from the age of five. Depending on the exact date of birth, school enrollment can be postponed by one year.